(RNS) A new crisis hotline for those struggling between faith and atheism launched Friday (Feb. 27).

Called “The Hotline Project,” the 24-hour free service will match volunteers with people who are considering leaving religion. It is a project of Recovering From Religion, a Kansas City, Mo.-based nonprofit that aids those transitioning out of faith.

“When people are reconsidering the role religion plays in their lives, they risk losing their families, their spouses, their jobs,” said Sarah Morehead, executive director of Recovering From Religion. “These people are isolated, excluded, shunned. It rocks these people to the bottom of their hearts. It is heartbreaking.”

The hotline’s purpose is to offer a listening ear, support and resources. Volunteers will not argue with people about religion or try to convince people to leave their religion, Morehead said. The hotline’s motto reflects its intended neutrality: “When faith is on the line, so are we.” The toll-free hotline — whose number is 184-I-DOUBT-IT — has been two years in the making and cost about $50,000 to launch, Morehead said. The bulk of the funds were raised from donations in about three weeks, and a major donor, who wishes to remain anonymous, stepped in with additional support.

The hotline will be staffed by volunteers who have undergone a minimum of 10 hours of training. At least 80 volunteers were fully trained for its launch, with that number expected to reach 100 by the end of the weekend, Morehead said. The bulk of the volunteers are based in the U.S., but there are volunteers from Canada, the United Kingdom and South Africa as well.

The hotline’s launch comes a day after the murder of an outspoken American-Bangladeshi atheist, Avijit Roy. Roy and his wife were attacked with machetes while traveling in Dhaka, Bangladesh, Thursday. Roy was the author of Mukto-Mona blog, which championed secularism in the Muslim-majority country.

Atheists, and those considering atheism, in this country are sometimes threatened as well. The most prominent example is Jessica Ahlquist, the teenager who received death threats after seeking the removal of a prayer banner at her Rhode Island high school in 2011. Speakers who share stories of their lost loved ones, careers and livelihoods are common at atheist conventions.

“We want to give people a safe place where they can call and get their questions answered and get some resources,” Morehead said. 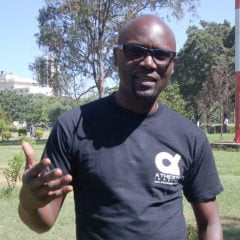