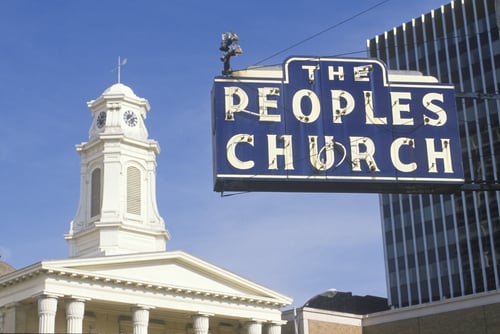 (RNS) A recent survey found that 57 percent of Republicans agreed that Christianity should be established as the United States’ national religion.

Not only would this violate the clear wording of the Constitution and the intention of the founders to keep religion and government separate, it also raises a difficult quandary.

Of the estimated 1,500-plus Christian denominations in the U.S., which flavor of Christianity would emerge as the national standard?

This could go on and on. Immersion baptism or sprinkling? Adult baptism or infant baptism? Eucharist-centered or preaching-centered? Biblical literalist or progressive? Male leaders, female leaders or both? Gay-friendly or gay-loathing?

We could do this all day. For Christians are brilliant at splitting hairs, and absolutely determined to be absolutely right. That’s a principal reason America’s founders were determined to keep religion on its own page. They came from Europe, after all, where Christians slaughtered other Christians over power and right opinion.

We could broaden the GOP’s goal to focus on all three Abrahamic faiths. But then we would face similar splintering within Judaism and within Islam. And embracing Abraham would confound the goal of making Jews and Muslims feel unwelcome.

The GOP’s goal, of course, isn’t to deepen people’s faith or commitment to mission and ministry. It certainly isn’t to bring about something as radical as the Sermon on the Mount, or Jesus’ rebuke of rich people, or his refusal to judge, or his promise of new life, or his opening God’s kingdom to outcasts. Its goal is to enshrine a narrow version of a moral code as “good religious law,” while Islam’s Shariah would be outlawed as “bad religious law.”

Some in the Republican Party want official approval to oppress and marginalize nonconformists, dissenters and freethinkers — in other words, the very kind of people who founded the United States.

The United States has survived this long because church and state were kept separate. That was by design. As the rising tide of religion-based intolerance and vitriol shows, it was a wise design.

We are safe from religion — which was the founders’ goal — when all religious voices can be heard. A competition of ideas is healthy. But if one religious voice became dominant, the resulting intolerance would take us back to the religious wars that tore Europe to pieces. We would see why our ancestors came to the New World. Not to get rich or to establish free-market capitalism, but to free themselves from religious oppression.

Christians can do amazing things to help society be healthy. But when we get in charge, we become demonic. The U.S. has never been a “Christian nation,” and we shouldn’t want it to become one.

Religion Hub
Americans who aren’t sure about God are a fast-growing force in politics – and they’re typically even more politically active than white evangelicals
Follow us on Facebook!
Submit your photos to RNS