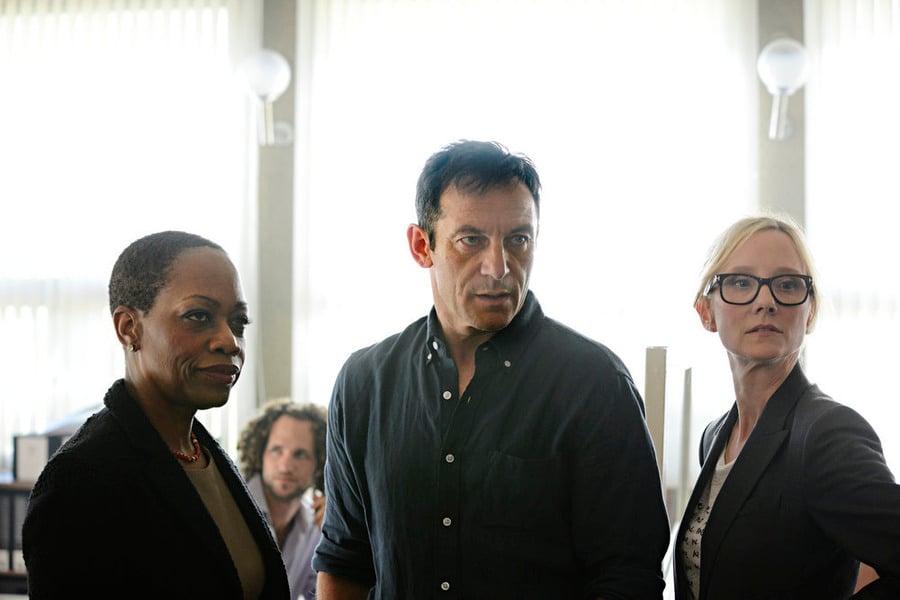 Left to right, Regina Taylor as Ruth Ridell, Jason Isaacs as Peter Connelly, and Anne Heche as Lynn Monahan in the first season of “Dig.” Photo by Ronen Akerman/USA Network

(RNS) Breathlessly describing his new USA Network series “Dig” in a promo, leading man Jason Isaacs promises “everything is based on reality and true.”

The new series, which premiered Thursday (March 5), moves quickly between multiple story lines and locations, bouncing off prophesies and spinning conspiracies around the Second Coming of Christ, the Book of Revelation and the restoration of the Jewish Temple in Jerusalem, where much of the series is filmed.

Throw in a high priest’s magical breastplate, a spotless red heifer and a doomsday Christian group living in a bunker and the series becomes the would-be love-child of Steven Spielberg and Dan Brown.

And that’s just the first episode.

Isaacs — a British actor best known to American fans as Lucius Malfoy in the “Harry Potter” films — says in the promo he expects the first episode to send viewers rushing to the Internet to “find out more.”

The show has some good television history behind it. Tim Kring (“Heroes”) and Gideon Raff (“Homeland”) are its executive producers. But “Dig” promises something more than its predecessors: Its cocktail of biblical prophecy and contemporary conspiracy looks to have a twist of the supernatural that will, as one character predicts, “threaten everything we believe in.”

So what’s “true” and what’s fiction in “Dig”? Here’s some background on the main prophesies, theories and biblical references touched on in the first hour of the show: Left, Jason Isaacs as Peter Connelly, and Alison Sudol as Emma Wilson in the first season of “Dig.” Photo by Ronen Akerman/USA Network

“Dig” opens in a barn in Norway where an ultra-Orthodox rabbi examines a newborn red calf. In the Bible, God tells Moses to command the Israelites to “bring thee a red heifer without spot, wherein is no blemish, and upon which never came a yoke.”

True, many Ultra-Orthodox Jews believe such a calf must be found and sacrificed before the Messiah can come and rebuild the Jewish Temple. This so-called “Third Temple” is prophesied in the Book of Ezekiel as the place God will live. And there are real-life farmers genetically engineering the birth of such cows outside of Israel, and many contemporary Jews pray for the eventual restoration of the Temple.

The Ark of the Covenant

The (young, hot, female) archaeologist Emma Wilson tells FBI agent Peter Connelly (Isaacs) she is involved in a dig to uncover the Ark of the Covenant, the golden chest that is supposed to contain the original tablets of the Ten Commandments. Wilson and her colleagues expect to find the Ark in a series of tunnels under the Temple Mount.

There are actual tunnels under the Temple Mount, a site sacred to Jews, Christians and Muslims and a place where they often come into conflict, and the theory that the Ark is under there somewhere is a real one. And, true, digs under the Temple Mount are forbidden by authorities for fear of compromising the foundation of the Dome of the Rock, the golden domed mosque seen in background shots through much of “Dig.” And a warning — find the Ark and your face might melt off, a la the Nazis in “Raiders of the Lost Ark.”

Some sinister person in “Dig” has stolen a priceless golden breastplate from a Jerusalem museum, kicking off car chases, clandestine meetings and perhaps a murder. When a devout Jewish character gets a glimpse of the stolen item, he begins praying and says, “This is the Urim ve Thummim,” an item described in the Old Testament as being able to communicate with God.

There is a priestly breastplate described in Exodus, and the one in “Dig” bears a close resemblance. It is square and has a series of 12 bricklike gemstones (they are missing!), one for each of the twelve tribes of Israel. But “Dig” makes a bit of a stumble here — the Urim and Thummim were not the actual plate itself, but separate tools of divination supposedly held in a pouch behind the breastplate. Characters in “Dig” assert that the breastplate can be used to “talk to God.”

And here’s a bonus factoid “Dig” doesn’t mention — yet. Mormons know the Urim and Thummim as two of the tools their prophet Joseph Smith said he used to translate the Book of Mormon from the golden plates he is supposed to have found in the woods of upstate New York.

There are other real people, actual places and facts “Dig” draws on. Yes, there are multiple, independent Christian groups that place the Book of Revelation at the center of their theology, and some of them are (or were, in the case of the Branch Davidians) located in the American Southwest. There are warm, ongoing relationships between some Christian and Jewish groups that expect the end of the world to come soon.

But are there currently desert-bound cults that are producing little boys in the hopes one will become the Messiah? Are bands of the ultra-Orthodox roaming the tunnels below the Temple Mount and slaughtering lambs in their wake? And more importantly, is there a mikvah — a Jewish ritual bath — under the Temple Mount being used as a coed hot tub?

Probably not. But it’s fun to watch and think about for an hour a week.