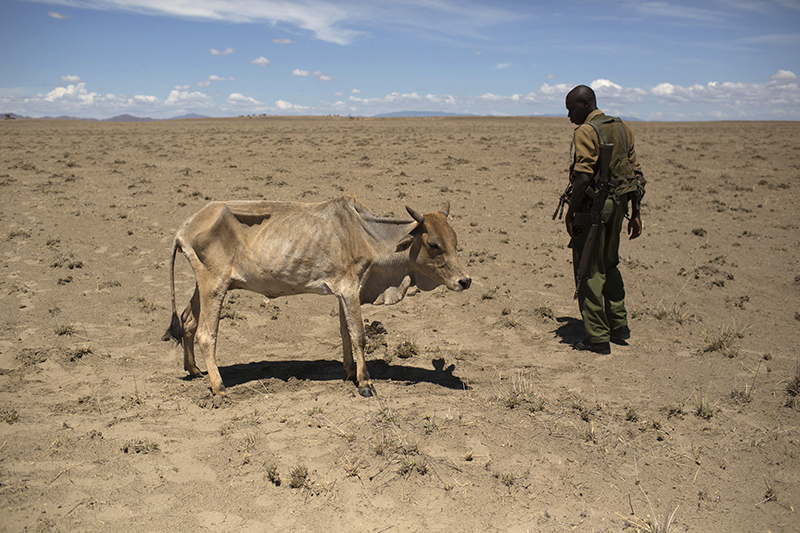 A Kenyan soldier from the Rapid Deployment Unit, an emergency response unit deployed due to recurring clashes and killings between Turkana and Dhaasanac communities, looks at a cow that is dying from hunger a few hundred meters from the Kenya-Ethiopia border in northwestern Kenya on Oct. 13, 2013. Photo courtesy of REUTERS/Siegfried Modola
*Editors: This photo may only be republished with RNS-KENYA-CATHOLIC, originally transmitted on March 10, 2015.

But now, in an effort to fight hunger, the Roman Catholic Church is making 3,000 acres of church-owned land available for commercial farming.

“We want to produce food, create employment and improve quality of life for the people,” said the Rev. Celestino Bundi, Kenya’s national director of the Pontifical Mission Societies.

This is the first time the church has entered into large-scale farming,  though it owns massive tracts of land across the country, most of which is idle and in the hands of dioceses, parishes, missionaries and congregations.

“We have the will and the support of the community and government,” said Bundi. “I think time has come for Kenya to feed herself.”

For now, the church is creating farms that will grow maize and beans, as well as raise chicken and dairy cattle, for the church and the commercial market. 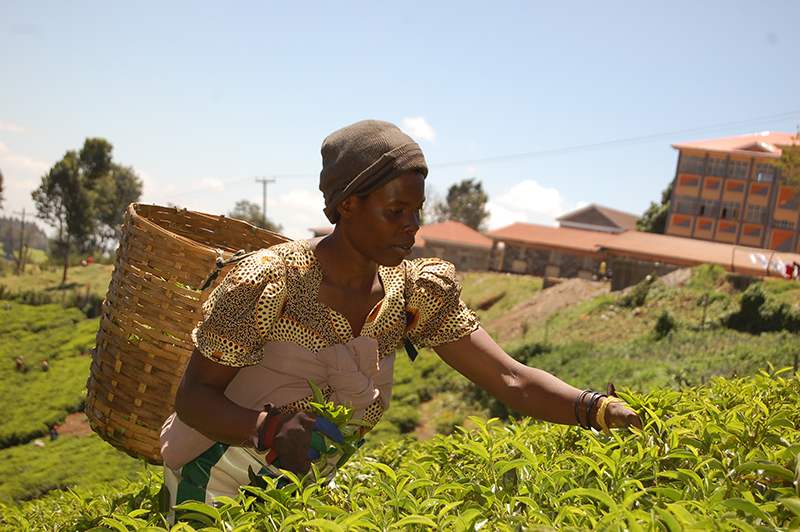 The food produced by the church is expected to boost the national reserves and help reduce the number of people who go hungry.

This is not new. Since 1970, Kenya has faced repeated droughts, which experts say are more frequent, shorter in duration but more intense.

Over 1.4 million were affected by the drought in 2008. In late 2009 and early 2010, more than 10 million people were at risk of hunger after harvests failed due to drought.

With such developments in Africa and the world, Pope Francis in 2014 called for changing the paradigm of aid and development policies.

The pontiff said defeating world hunger would require more than aid and donations. This is the basis of the Kenyan church initiative, said Bundi.

Some of the resources to be used for the project are from the Pontifical Mission Societies’ U.S. chapter, which is providing a low-interest loan to the Kenyan church.

About 25 miles northwest of Nairobi, the Limuru Archdiocesan Farm, owned the Catholic Archdiocese of Nairobi, provides some lessons for the church’s new initiative.

Until 2002, over 400 acres of land lay unused in an area where local people are poor, landless and in great need of food.

Retired Archbishop Ndingi Mwana a’ Nzeki of Nairobi turned the land into a farm that now feeds the community, provides employment and supplies produce to surrounding markets.

“We employ 200 people and the farm is able to pay them and sustain itself,” said Martin Nderitu, the farm manager. “The secret was to take a risk to expand and be persistent in production. We are making profits and expanding the farm.”

Nderitu says making more land available for farming is one of the best decisions by the Kenyan Catholic Church.

“It will pay dividends,” he said. “But they must employ professionals to manage the farms.”

At the same time, Bundi said, he foresees some challenges. These include managing the project, paying back the loan and changing congregations’ mindset about the benefits of the project, which are for profit.