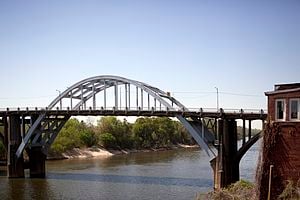 The Edmund Pettus Bridge in Selma, Ala.

Barack Obama gave a fine speech in Selma on Sunday, but to me there was something sad about it. It sounded a clarion that's rarely heard these days: "When the trumpet call sounded for more to join, the people came – black and white, young and old, Christian and Jew, waving the American flag and singing the same anthems full of faith and hope."

Quoting Isaiah as Martin Luther King, Jr. once quoted Isaiah, the president wound up with: "We honor those who walked so we could run. We must run so our children soar. And we will not grow weary. For we believe in the power of an awesome God, and we believe in this country’s sacred promise."

This spiritual inclusivity perfectly exemplifies what the distinguished Italian scholar of totalitarianism Emilio Gentile defines as civil religion: the "sacralization of a political system" that guarantees "a plurality of ideas, free competition in the exercise of power, and the ability of the governed to dismiss their governments through peaceful and constitutional methods." Gentile contrasts this with political religion, an “intolerant, invasive, and fundamentalist" faith employed as a weapon in partisan combat.

Truth to tell, it's the latter that dominates American public discourse today -- directed often enough at President Obama himself. His enemies portray him as unpatriotic, question his identity as an American and as a Christian, demand that he swear allegiance to their own brand of "American Exceptionalism." As for his friends, they aren't running, aren't expecting their children to soar. They seem weary.

They may still believe in an awesome God, but this country's sacred promise has grown hollow since that famous march 50 years ago.