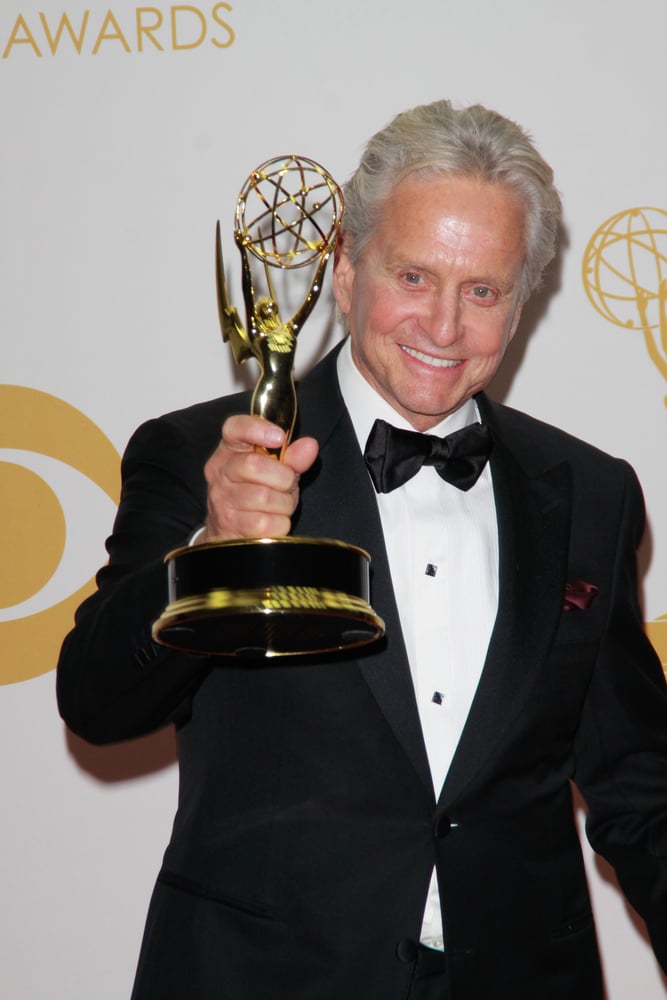 Michael Douglas at the 65th Primetime Emmy Awards at the Nokia Theatre, LA Live on September 22, 2013 in Los Angeles, Calif.

“And the award for Best Public Statement on The Jewish Condition By A Jew In The Entertainment Business – the envelope, please…”

Yes, that Michael Douglas – as in “Fatal Attraction,” Gordon Gekko in “Wall Street,” Liberace in “Behind the Candelabra.”

In a recent essay in the Los Angeles Times, Douglas recounts how his family was on vacation in southern Europe, and his son, Dylan, was subject to anti-Semitic verbal abuse at the hotel pool. He had been wearing a Star of David necklace. Michael talked to his son about the pervasive presence of anti-Semitism in the world. In the essay, Michael Douglas analyzes the reasons for the uptick in anti-Semitism (naming, by the way, the influence of Muslim extremists). He reminds us that it is everyone’s duty to stand up to the forces of hatred and bigotry that are all too presence in the world.

In his essay, Douglas talks about his father, the noted actor Kirk Douglas, who changed his name from Issur Danielovitch. Michael Douglas and his wife, actress Catherine Zeta-Jones, had taken Dylan to Israel for his bar mitzvah ceremony. Douglas received the 2015 Genesis Prize, which honors "exceptional people whose values and achievements will inspire the next generation of Jews."

Back to Michael Douglas’s imaginary Oscar for “Best Public Statement on The Jewish Condition By A Jew In The Entertainment Business.”

This was an easy win – simply because there was so little competition.

There is a shortage of "Jewish Jews" in the entertainment business. When we scan the list of famous Jewish actors and actresses, we find very few who seem to do anything Jewish with their lives.

As Neil Gabler wrote in his book on the subject, the entertainment industry was invented by Jews who were eager to shed their Jewishness. Hollywood was how Jews could become "real" white bread Americans. Joseph Levitch became Jerry Lewis. Allan Stewart Konigsberg became Woody Allen. Lawrence Harvey Zeigler became Larry King. And, yes, Issur Danielovitch became Kirk Douglas. We are already sixty years beyond the era when Jewish performers had to change their names.

We need more Jews in Hollywood to stand up for Judaism, Jewish causes, and the state of Israel. Here's my fantasy: Hollywood’s most “visible” Jewish stars, taking out a full page ad in the New York Times, decrying international anti-Semitism – and then urging their gentile counterparts to join them.

One last thing about Michael Douglas and his “shofar blast” on anti-Semitism.

For many traditional Jews, Michael Douglas’ Jewish identity is problematic. His father is Jewish; his mother, Diana, is not. According to Reform Judaism, the child of a Jewish father and a non-Jewish mother is Jewish, if he or she is raised as a Jew and received a Jewish education. But Michael Douglas, by his own admission, was raised as “nothing.”

The same thing could have been true about Douglas’s son, Dylan; his mother, Catherine Zeta-Jones is also not Jewish. But Dylan has many Jewish friends, and they inspired him to care about Judaism. He chose to learn about Judaism and to celebrate becoming bar mitzvah.

And this, in turn, inspired Michael Douglas to reconnect with the faith of his own father -- who had become bar mitzvah again at the age of 95.

In many ways, Jewish history is a story of Jews reconnecting with their faith and their people.

Consider Moses – born of Israelite parents, raised as an Egyptian, who discovers his people and his destiny.

Consider Theodor Herzl – an assimilated Jew who once dreamed of a mass conversion of the Jews to Christianity, who encountered the rabid anti-Semitism in the streets of Paris during the Dreyfus trial, which inspired him to create political Zionism.

Michael Douglas walks in their paths.

The Michael Douglas story reminds us that many Jews create their Jewish identity in “informal” ways, and through informal definitions. Michael Douglas obviously knows the traditional definition of Jewish identity; it was simply irrelevant to him. He became what he wanted to become (or, what he already was, at least in potential). The same is true of his son, Dylan. His friends “reminded” him that he was, at least in potential, Jewish.

The descendants of Kirk Douglas, nee Issur Danielovitch, could have easily just melted into the American mainstream, and continued to be “nothing.” Dos pintele Yid (the hidden spark of Judaism) is much more resilient than we had ever thought.

The prophet Isaiah named his son Shear-yashuv – “a remnant will return.” Michael Douglas and his son Dylan are that remnant.

(While I am on the subject of Hollywood -- I will speaking on the meaning of "Martini Judaism: for those who want to be shaken and stirred," at Temple Emanuel of Beverly Hills, this weekend -- March 20-21. I cannot wait to be re-inspired by my friends and colleagues, senior rabbis Rabbi Laura Geller and Rabbi Jonathan Aaron. I would love to see you there!)