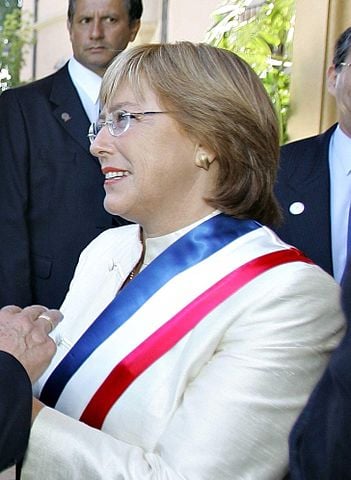 BOGOTA (Reuters) Chile is considering a bill to ease a complete ban on abortion that would allow for potentially life-saving procedure under certain circumstances and has a high chance of being passed by lawmakers, a rights group said.

The draft law introduced to Congress on Tuesday would permit abortion when a mother's life is at risk, when a fetus would not survive the pregnancy or in the case of rape.

The bill has been backed by President Michelle Bachelet, whose center-left coalition controls a majority in Congress. Bachelet, a trained pediatrician, had pledged to change the law ahead of her 2013 election as part of a series of reforms to shake up the socially conservative South American nation.

"I'm positive the bill will get passed. It's long overdue. Bachelet started the initiative so this has presidential backing and support from most of the political parties," said Monica Arango, regional director for Latin America and the Caribbean at the Center for Reproductive Rights.

"I would be surprised, though, if the bill gets through quickly. There's still a way to go," she told the Thomson Reuters Foundation in a telephone interview in Bogota.

Arango said while many lawmakers are in favor of allowing women to terminate a pregnancy if her life is at risk, discussion is likely to center on the more contentious issue of allowing abortion in cases of rape.

The outright ban on terminations was put in place during the final days of Augusto Pinochet's 1973-1990 dictatorship. A number of attempts since then to decriminalize abortion have been blocked by right-wing legislators.

Chile is one of six countries in Latin America, including El Salvador, the Dominican Republic, Haiti, Honduras and Nicaragua that have blanket bans on abortion.

Estimates on the number of illegal abortions carried out in Chile range from 15,000 to 160,000 per year.

According to an opinion poll published in February, 71 percent of Chileans supported the proposed bill and 19 percent said they were in favor of allowing abortion 'under any circumstances.'

Bishops from the powerful Catholic Church and some conservative politicians have criticized the bill, saying that laws must protect the rights of an unborn child at all costs.

"Chile's abortion ban goes back to the legacy of the country's dictatorship, which overturned a law allowing abortion," Arango said.

The U.S.-based Center for Reproductive Rights and other rights groups say total abortion bans are a leading cause of maternal mortality in all parts of the world because they force women to undergo dangerous backstreet abortions, which put their lives at risk.

Restricting access to abortions does not reduce the number performed, according to a study by World Health Organization and the Guttmacher Institute for reproductive health.

The study found that the 2008 abortion rate in Latin America was 32 per 1,000 women of childbearing age, while in Western Europe, where abortion is generally permitted on broad grounds, the rate is 12 per 1,000.