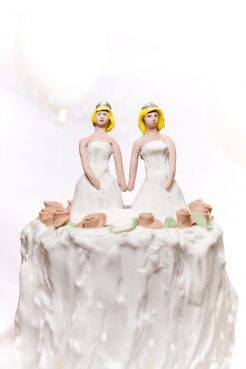 Refusing to bake a cake for the wedding of a lesbian couple may cost the bakery a hefty fine.

PORTLAND, Ore., (Reuters) – An Oregon judge has ruled that the owners of a Portland-area bakery who refused to bake a wedding cake for a gay couple should pay the couple $135,000 in damages, state officials said Tuesday.

In 2013, when the two women were planning their nuptials, the Kleins, citing their religious beliefs, refused to bake the cake. The gay couple married in 2014 after a federal judge struck down the state’s same-sex marriage ban.

The state’s Bureau of Labor and Industries (BOLI) contends the bakery owners violated the state’s anti-discrimination laws because the shop is not a registered religious institution.

Both sides of the civil rights case have 10 days to either file an exception to the order, or ask for more time to respond, BOLI spokesman Charlie Burr said.

The order will not be final until Commissioner Brad Avakian issues a final decision on the damages, which could include lowering or raising the amount. His decision is expected by summer.

“Our agency is committed to the fair and thorough enforcement of all Oregon civil rights laws including the equality act of 2007,” Burr said.

Under Oregon law, businesses cannot discriminate or refuse service based on sexual orientation.

“The facts of this case clearly demonstrate that the Kleins unlawfully discriminated against the Complainants,” BOLI officials said in a statement.

In response to the proposed order, the bakery owners started a GoFundMe campaign, but it was shut down over the weekend by the crowdfunding website, the bakery’s Facebook page said.

North Carolina-based religious organization Samaritan’s Purse is raising money for the couple in a post on their website entitled: “Help persecuted Christian couple in Oregon fined for refusing to serve lesbians.”

The judge’s ruling was less than the $150,000 sought by administrative prosecutors and did not propose awarding damages for alleged harm from media coverage of the case.