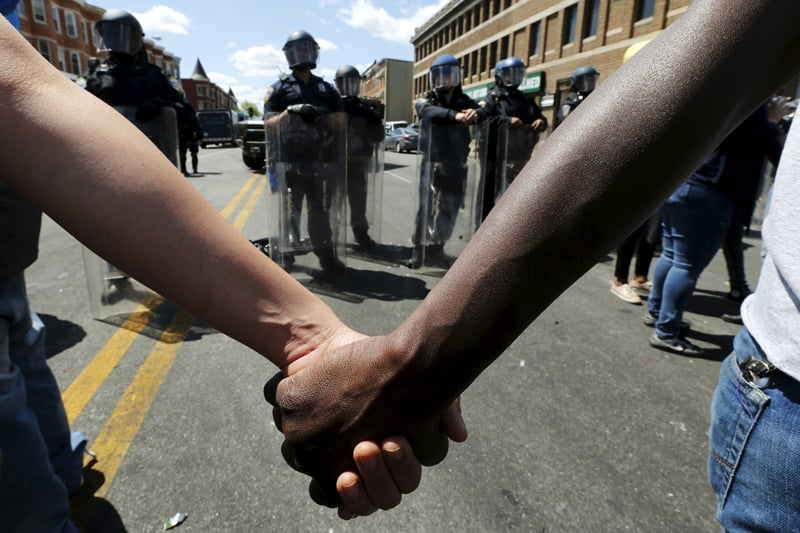 Members of the community hold hands in front of police officers in riot gear outside a recently looted and burned CVS store in Baltimore, Maryland, on April 28, 2015. The day after rioters tore through Baltimore, the city’s mayor was criticized on Tuesday for a slow police response to some of the worst U.S. urban unrest in years after the funeral of Freddie Gray, a 25-year-old black man who died in police custody. Maryland Governor Larry Hogan said he had called Mayor Stephanie Rawlings-Blake repeatedly Monday but that she held off calling in the National Guard until three hours after violence first erupted. Photo courtesy of REUTERS/Jim Bourg

In this week’s official Mormon news:

These are all significant stories – and #2 and #3 are both forward-thinking and yay-making. So this is me, cheering.

Except for one thing.

Nowhere to be found in this week’s official Mormon news:

That’s not surprising, you say. It’s only been happening since Monday. How could LDS leaders be expected to respond to this event in just a few days?

Except that it’s not just been a few days. It’s been nearly a year.

When you look at it that way, the Church’s strict radio silence on racial violence starts to feel pronounced and intentional.

When there’s a natural disaster, the Church is so quick to respond with sympathy, money, and aid. Whether we’re talking about Vanuatu last month or Nepal this past week, Mormon compassion for those who are suffering is immediate and tangible.

With other kinds of disasters – the kind that stem from human oppression — we are notoriously slow of speech.

I’m not saying the Church needs to respond to every single injustice that happens in a 24/7 news cycle. The world is too large – and, depressingly enough, too unjust – for that to be remotely realistic.

But half a century after the civil rights movement, black people are still dying in America’s streets at the hands of whites. Is it too much to expect that a prophetic religion that wants to offer God’s voice to us today would go out on a limb and say that, in general, this is wrong?

Maybe it is too much to be prophetic, to call out injustice where it is clearly occurring. If that’s the case, and we’re saving all our social capital for speaking prophetically on a few personal morality issues like sexual orientation, then perhaps we could at least go out of our way to be pastoral.

Bottom line: there are teenage black boys in our own wards who are wondering about their safety and worth.

Being pastoral here means affirming that black boys and men matter. That their bodies are not to be viewed as inherent public threats if they so much as don a hoodie. That we love them and stand with them.

Being pastoral means saying that out loud, in public, and with the full authority of the Church. Multiple times if necessary.

And given the terrible history of the last year, there’s little doubt that reiterating these affirmations will be necessary again all too soon.