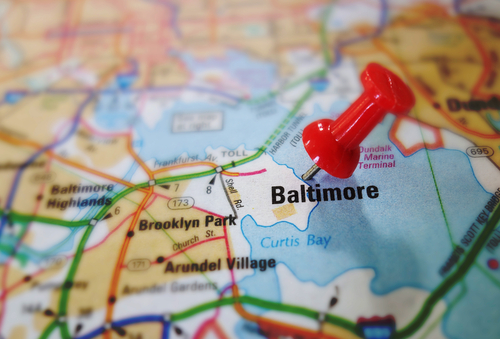 My post last week about the lack of an institutional LDS response to the racial violence in Baltimore met with some polarized responses.

On the one hand, some readers agreed with me that the Church’s official silence is hurtful. They discerned a lopsidedness in its passion for fighting against same-sex marriage compared to its apparent “no comment” policy on racial justice.

On the other hand, many more commenters argued that the Church’s silence is appropriate, either because we don’t have all the facts about those instances of alleged racial injustice . . . or because the oppression of African Americans has been greatly exaggerated by the media. The latter comments broke my heart. That a Mormon could argue that black violence against whites is far more pervasive than white violence against blacks – as one of my respondents did last week — demonstrates a willful denial of the racial inequities that linger in this country.

Just about everything about the discussion was depressing, except for the welcome news that the Baltimore stake had scheduled a special fast for May 3. Apparently this fast was already planned before the arrest of Freddie Gray in response to “the dire conditions of the youth” of Baltimore, according to Aimee Evans Hickman, who is a counselor in the Young Women’s presidency there. The invitation read:

We invite all members of the Baltimore Stake, as well as friends and neighbors who are not of our faith, to join with us in a special fast on Sunday, May 3rd, for peace in our city, and, in particular, for the safety and hope of the youth of Baltimore who are beset by poverty and violence.

Particularly encouraging: The Facebook post about the stake fast was shared over 3,000 times. People from all over the world, both Mormon and those of other faiths, pledged to fast for Baltimore. Reading those comments about people’s prayers and eagerness to help restored some of my faith in the goodness of the Mormon people – a faith that had taken a ding from reading some of the comments on this blog.

Hickman says that about 2/3 of the LDS testimonies borne yesterday had to do with the Baltimore uprising, with a fair number specifically referencing the role of race.

“Our bishop opened the fast meeting with wise and compassionate remarks that directly addressed the week’s events, emphasizing that the concept of ‘peace’ is not the absence of problems and that ‘restoring’ peace to our city does not mean simply going back to the way things have been,” says Hickman. “There was a real openness about how this week’s events were a result of systemic problems and that as a religious community we have an obligation to address these issues spiritually as well as practically.”

I fasted too. This weekend I was leading a Mormon women’s retreat outside Seattle, so it wasn’t practical to do a full 24-hour fast. But surely I could do something. I announced when I spoke on Saturday that I was going to do a half-day fast the next morning, and I invited any of the women who wanted to join me to come and pray together during the time we would normally eat breakfast.

I wasn’t sure how many would take me up on the offer. But at the appointed hour, six of us prayed together for peace in Baltimore and the world, and for the softening of hearts—starting with our own.

The Baltimore fast reminded me of two important truths, the first being that most Mormon people are eager to be mobilized for good. We want to be involved as Mormons and sometimes don’t know quite how to do it. Fasting is something we can do, something that can build bridges and help bless the world.

The second is that I need to reconfigure my own faulty understanding of the Church. Last week I complained about the lack of an institutional LDS response. But the Church is us, its members, first and foremost. We, along with Christians the world over, are the feet and hands of Christ’s body. That “we” includes, but is not restricted to, fifteen men who work in a tall office building in Salt Lake City.

In other words, if I criticize “the Church” for not doing something, I need to also take a hard look at what I am doing or not doing.

And actually, one angry reader saved me the trouble. He wrote on Facebook that he’d taken the time to comb through all my previous blog posts to see if I had ever publicly referenced the same racial injustices that the Church had been silent on: 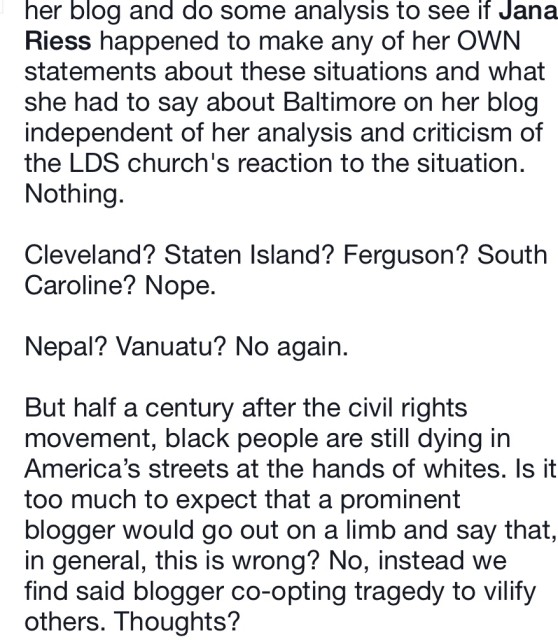 And he’s right. I had not discussed those issues on the blog, and I was wrong not to.

Staying silent was wrong because I am the Church, too.

And so are you. What are we going to create together?