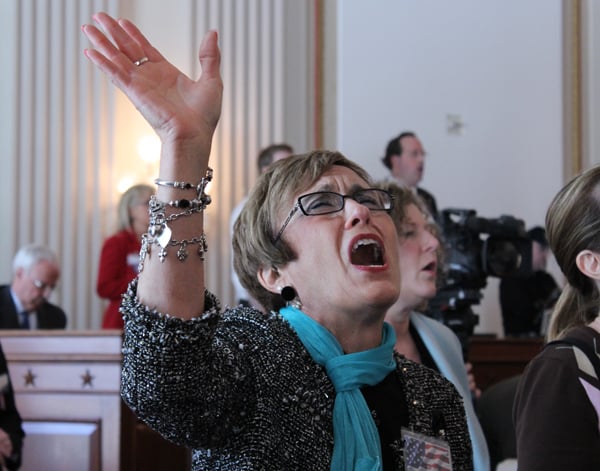 Anita Hensley of Kansas City, Mo., joins in worship at the National Day of Prayer observance on Capitol Hill on May 2, 2013. RNS photo by Adelle M. Banks

(RNS) After decade-long resistance, the Southern Baptist Convention will admit missionary candidates who speak in tongues, a practice associated with Pentecostal and charismatic churches.

The new policy, approved by the denomination’s International Mission Board on Wednesday (May 13), reverses a policy that was put in place 10 years ago.

Speaking in tongues is an ancient Christian practice recorded in the New Testament in which people pray in a language they do not know, understand or control. The practice died out until Pentecostalism emerged around the turn of the 20th century. In Pentecostal churches it is considered one of many “gifts” of the Holy Spirit, including healing and the ability to prophesize.

Allowing Southern Baptist missionaries to speak in tongues, or have what some SBC leaders call a “private prayer language,” speaks to the growing strength of Pentecostal churches in Africa, Asia and South America, where Southern Baptists are competing for converts and where energized new Christians are enthusiastically embracing the practice.

“In so many parts of the world, these charismatic experiences are normative,” said Bill Leonard, professor of church history at Wake Forest Divinity School. “Religious groups that oppose them get left behind evangelistically.”

The change does not mean that Southern Baptists will commission missionaries who speak in tongues. But Wendy Norvelle, a spokeswoman for the IMB, said an affirmative answer regarding the practice would no longer lead to automatic disqualification.

Southern Baptists have long prided themselves as among the world’s most ambitious missionaries — reaching countries and regions few dared to go — but they are increasingly finding competition from fast-growing Pentecostal Christianity, which now has an estimated 300 million followers worldwide.

In 2005, the International Mission Board created guidelines that specifically disqualified all missionary candidates who spoke in tongues. For Southern Baptists, the practice, also known as glossolalia, ended after the death of Jesus’ apostles. The ban on speaking in tongues became a way to distinguish the denomination from others.

These days, it can no longer afford that distinction.

“Southern Baptists are experiencing such demographic trauma of membership and baptism they need new constituencies among nonwhite population,” Leonard said.

Indeed, the issue became such a lightning rod for Southern Baptists that it got top billing on the application form.

“If someone said they did pray in tongues, they were automatically disqualified, essentially for being honest,” said Wade Burleson, an Enid, Okla., pastor who opposed the ban.

The policy changes approved this week during an IMB trustee meeting in Louisville, Ky., will leave the question of tongues in the application.

And the IMB said it will still end employment for any missionary who places “persistent emphasis on any specific gift of the Spirit as normative for all or to the extent such emphasis becomes disruptive,” an FAQ on the IMB website explained.

Other policy changes this week would allow divorced missionaries to serve in more positions, including long-term missions assignments.

And the IMB will recognize baptisms performed by other Christian denominations so long as they involved full-body immersion. Previously, a Southern Baptist minister must have baptized missionary candidates who transferred from another denomination.