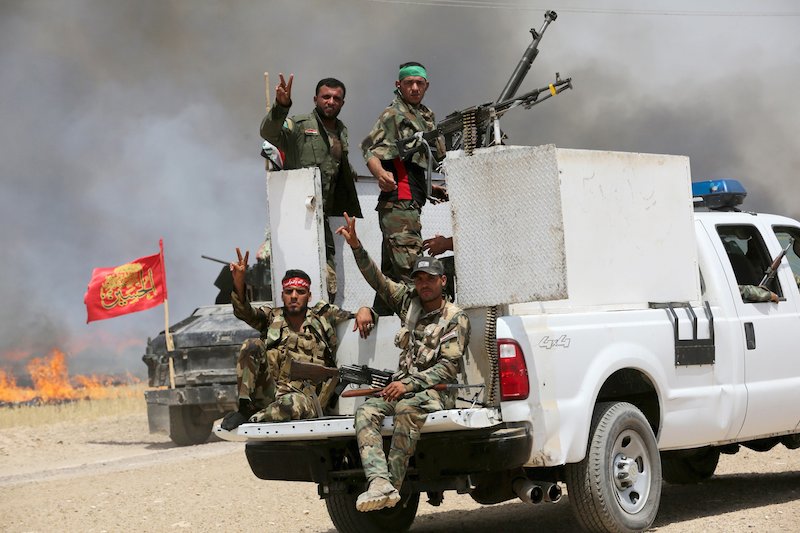 Shi'ite paramilitaries ride in military vehicles in Nibai, May 26, 2015, in effort to push Islamic State out of Sunni heartland of Iraq. Photo courtesy of Reuters.
May 27, 2015
Reuters 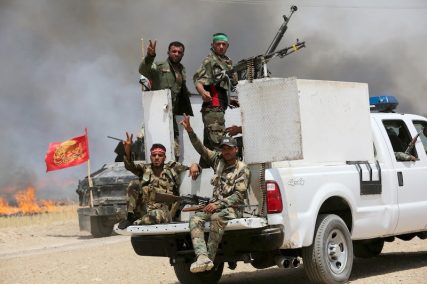 Shi'ite paramilitaries ride in military vehicles in Nibai, May 26, 2015, in effort to push Islamic State out of Sunni heartland of Iraq. Photo courtesy of Reuters.

BAGHDAD (Reuters) - A campaign led by Shi'ite paramilitaries to drive Islamic State militants from Iraq's Sunni heartland was rebranded on Wednesday after criticism that the name chosen for the push was overtly sectarian.

The move was a response to fears that Iraq's reliance on Shi'ite paramilitaries to defeat Islamic State fighters, instead of the disordered and demoralised national army, could alienate Sunni Iraqis and deepen the region's sectarian divide.

The United States said it was "unhelpful" that the militias had dubbed the operation to retake Iraq's western province of Anbar "Labeyk Ya Hussein." The name translates to "At your service, Hussein," in honour of one of the most revered figures in Shi'ite Islam.

The name also provoked complaints from Iraqis in Anbar.

"This is extremely sectarian," said unemployed resident Salam Ahmed, 41. "We have no more trust in them (the paramilitaries). They follow a foreign, Iranian agenda."

State TV said the paramilitaries had renamed the campaign "Labeyk Ya Iraq" (At Your Service Iraq) on Wednesday. A spokesman for the paramilitary groups, known as Hashid Shaabi, said both names had "the same meaning."

"Now we have opted for 'Iraq' and there is no problem," Karim al-Nouri said.

Iraq's Prime Minister Haider al-Abadi has been reluctant to send Iran-backed Shi'ite militias to Anbar, concerned they could provoke a sectarian backlash from the province's predominantly Sunni population.

But he was forced to deploy thousands of Shi'ite militiamen to Anbar after Islamic State insurgents overran the provincial capital of Ramadi on May 17, his government's biggest military setback in almost a year.

Two thousand more militiamen arrived at the Habbaniya base east of Ramadi on Wednesday, as insurgents laid mines on the city's eastern and southern outskirts.

The militia and a smaller contingent of security forces are within 6 km (4 miles) of the city's southern outskirts and about 11 km (7 miles) to the east. It's unclear when they will begin an assault on Ramadi.

The insurgents are trying to consolidate their gains in the rest of Anbar before the military campaign begins.