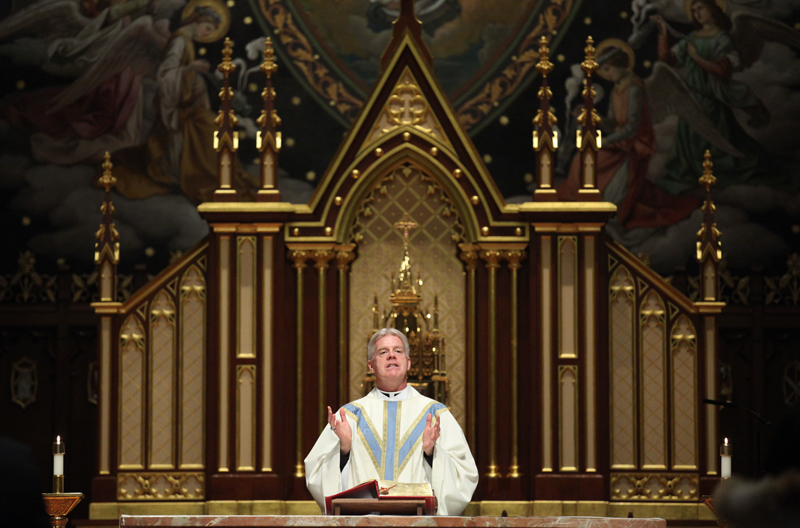 The Rev. Warren Hall says Mass as more than 50 Seton Hall couples renew their vows at a special Mass service at the Chapel on the Seton Hall campus in South Orange, N.J., on Feb. 14, 2014. Photo by Frances Micklow/courtesy of The Star-Ledger

(RNS) A Catholic priest in New Jersey who says he was dismissed from his campus ministry job over a Facebook post against anti-gay bullying and racism has come out as gay.

The Rev. Warren Hall told Outsports, a magazine for gay athletes, that while he remained committed to his vocation as a priest and to his vow of celibacy, he was not going to hide his sexual orientation.

“I have to be myself,” Hall said. “I can’t worry what other people think.”

Hall, who worked at Seton Hall University, announced on social media earlier this month that he had been fired from his job by Archbishop John Myers of Newark because he had posted a picture on Facebook last fall supporting the “NOH8” campaign.

“NOH8” stands for “no hate” and it grew out of the battle over banning gay marriage in California.

A spokesman for the Newark archdiocese, which is responsible for assigning chaplains to Seton Hall, has disputed the priest’s explanation of his removal.

But in an email Wednesday afternoon (May 27), James Goodness also said that while the archdiocese, like Pope Francis, does not want to sit in judgment, “someone who labels himself or another in terms of sexual orientation or attraction contradicts what the Church teaches — that every person is to be accepted with respect, compassion and dignity.” *

“Sexual orientation or attraction isn’t in itself a hindrance to a man’s ability to be a priest,” Goodness continued. “What is important is a priest’s commitment to living his ordination promises and embracing honestly what priesthood requires: to live a life of chaste celibacy, to support and promulgate the teachings and traditions of the church, and to respect and obey the authority of the church.”

Hall said that he posted an image of himself with the “NOH8” logo on his cheek amid the growing national debate over race and violence.

In an email to Seton Hall colleagues announcing his dismissal, the priest said he intended the post as a message against racism and bullying, not in support of same-sex marriage.

Hall said another priest saw the image, which was posted to Hall’s personal Facebook page, and alerted university and archdiocesan officials around Christmas last year. Hall said he was called in to explain the post, first by the university and then by the archdiocese.

He agreed to delete the post and his explanation of its intent seemed to put the matter to rest, he said.

Then, on May 11, as he was giving an exam to his sports and spirituality class, Hall was told to call Myers.

“None of us want bullying,” he said Myers told him, “but you have a further agenda here, and I can’t have you at Seton Hall because of that.”

Goodness on Wednesday reiterated his comments from a statement issued earlier in the month that Hall was not dismissed because of his advocacy of tolerance for gays and lesbians.

“The church doesn’t fire priests for tolerance; it condemns those who are intolerant,” Goodness said.

He added that “many factors … go into evaluating whether a particular assignment is a good fit for a priest” and said that the “NOH8” episode did prompt the archdiocese to reassess the level of “accountability” that the university chaplain has to the archdiocese. So he said Myers decided he needed someone else in that role.

Hall declined to elaborate on his Outsports interview, which was published Tuesday (May 26).

The priest said he was unsure where Myers would assign him but that he had requested a six-month sabbatical. He expressed his gratitude to Myers for assigning him to Seton Hall several years ago after he had lost his job as head of a private Catholic high school following an arrest for drunken driving.

Hall said that in the past year a few people had learned of his sexual orientation but now he wanted to be completely open.

“The best way to live is to live honestly. Honesty with oneself is the most important thing, but you have to be honest with other people,” he said. “I’m not afraid of those questions anymore.”

* This post has been updated to reflect the latest response from the Newark archdiocese.