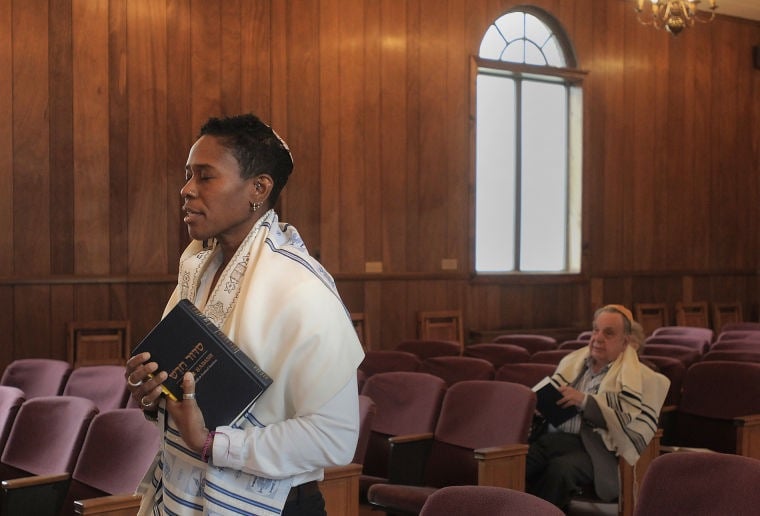 (RNS) Sandra Lawson, a former military police officer turned personal trainer, wasn’t religious about anything, except maybe fitness. She wasn’t looking to convert to Judaism or any other religion.

And she certainly never aspired to be one of the first — if not the first — black, openly lesbian rabbi.

But this spring Lawson finished her fourth year at the Reconstructionist Rabbinical College outside Philadelphia with the help of an online GoFundMe campaign. She plans to marry her girlfriend and spend the fall semester in Israel. If all goes according to plan, she will celebrate her ordination in 2018.

“Sandra,” explained Josh Lesser, the rabbi who presided at her conversion, ”is an ‘all-in’ kind of person.”

When Lawson, now 45, told him that she wanted to be a Jew 11 years ago, he said he didn’t know she would wind up in rabbinical school, but that “some kind of leadership would emerge from this.”

Lawson will be a free-spirited rabbi who takes the Jewish imperative for tikkun olam (“healing the world,” in Hebrew) seriously, her friends and fans say. No one — including Lawson herself, who earned a master’s degree in sociology while a personal trainer — is quite sure whether she will lead a congregation, pursue chaplaincy, lend herself to a progressive cause or focus on teaching. But just by being herself, they say, she will expand people’s ideas of what a Jewish leader looks like. 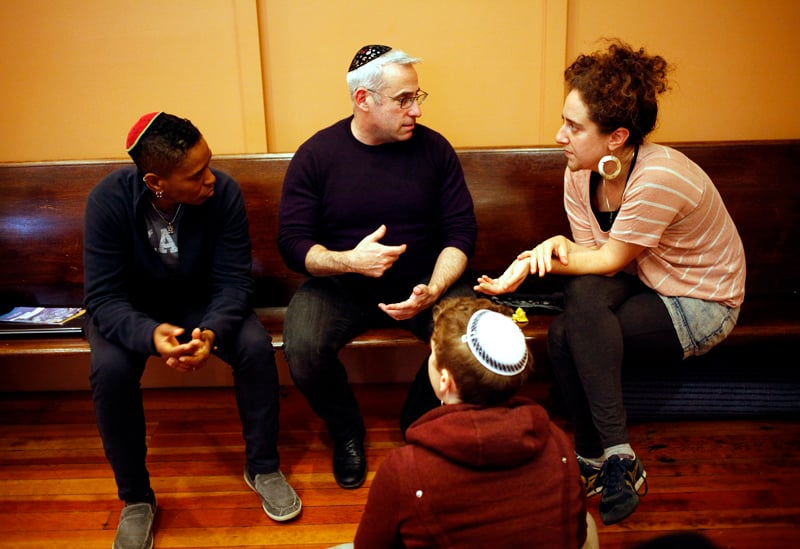 “As the American Jewish community is becoming increasingly diverse through intermarriage, conversion and adoption, role models are a critical component of identity formation,” said Diane Tobin, director of Be’chol Lashon, a San Francisco-based nonprofit that runs camps and other programs for and about Jews of color.

“But, race is just one of the many factors that will make Sandra a powerful rabbi,” Tobin continued. “From her military training to her background in sociology to her sense of humor, she brings a perspective that will be valuable to any community she serves.”

Her sexual orientation, Lawson said, has not thrown up obstacles in her path toward Judaism or the clergy. But race comes up in her Jewish circles in a way that being gay doesn’t. There are no solid figures on the number of black Jews in the U.S., but it is by all accounts relatively small.

No one has been purposefully mean or rejecting to Lawson, but too many of her co-religionists ask for her conversion story first off, she said, before they get to know her as a person or a Jew. Not long ago, a stranger saw her in a store, noticed her yarmulke and asked her if she was Jewish. She said she was and asked him the same question.

“He looked shocked,” Lawson said of the man who turned out to be Jewish. “Like I was not allowed to ask him what he had just asked me.”

And though race relations may not become the centerpiece of her rabbinate, it will shape her career, she said.

“As a rabbinical student, and a child of southern sharecroppers, I see (Martin Luther) King as one of the most prophetic voices ever and he reminds me of why I want to be a rabbi which is to help to make the world a better place for all,” she wrote on her blog recently.

A picture of King hung in her parents’ home while she was growing up. But Jesus’ did not. Her family was not particularly connected to her father’s Baptist roots, and her mother didn’t talk about religion. As a child, she was drawn to a story her mother told about an Ethiopian Jewish ancestor. But the point, Lawson remembers, was not so much that this forebear was Jewish, but that he did not come to America as a slave.

“I don’t want people to think I grew up searching for this Jewish identity,” Lawson said. “It was just a back story.”

But through a Jewish girlfriend in Atlanta, she was exposed to a full year of Jewish observances and holidays. At Shabbat dinners, Lawson loved how parents blessed their children. At the family’s Passover seder, she felt what Jewish tradition wants participants to feel — that in telling the story of the liberation of the Israelites, they are telling their own liberation story.

The relationship eventually ended. Then in 2001, she met Lesser, who hired her to be his personal trainer at the Urban Body gym in Atlanta. At first, Lawson knew her client as Josh Lesser. Later she found out he was Rabbi Josh Lesser. He invited her to Bet Haverim, a Reconstructionist synagogue in Atlanta founded by gay Jews.

The congregation was laid-back but serious about issues she cared about — gay rights and inequality.

“I was looking for a community and I thought: ‘I want to be Jewish. And I want to be Jewish here,’” Lawson said. After her conversion, and when she felt herself more drawn toward leadership in the Jewish community, she found out that “there is a school that trains people like Josh.”

So far, she has paid her $19,000 in annual tuition through scholarships and loans. But she recently launched a GoFundMe campaign titled “I want to be a rabbi.”

It has raised more than $6,300 of the $20,000 she seeks, from more than 115 people, including Daniel Sieradski, a Jewish activist prominent in the Occupy Wall Street movement.

“She speaks to the progressive causes that I hold dear as a progressive Jewish American,” said Sieradski.

“I feel that many of the leaders in our community are focused on trying to hew to the center or even appeal now more to the right because of the increasing grasp of the right over the American political paradigm,” Sieradski continued. “She doesn’t seem to be having any of that.”

The Reconstructionist movement is the smallest of the mainstream Jewish movements, but its theology, rabbis and progressive values influence the wider Jewish community. Decades ago it accepted women, gay and lesbian rabbis, and interreligious couples. The head of its rabbinical college and association of about 100 congregations, Rabbi Deborah Waxman, is thought to be the first woman and lesbian to lead a mainstream Jewish congregational movement. 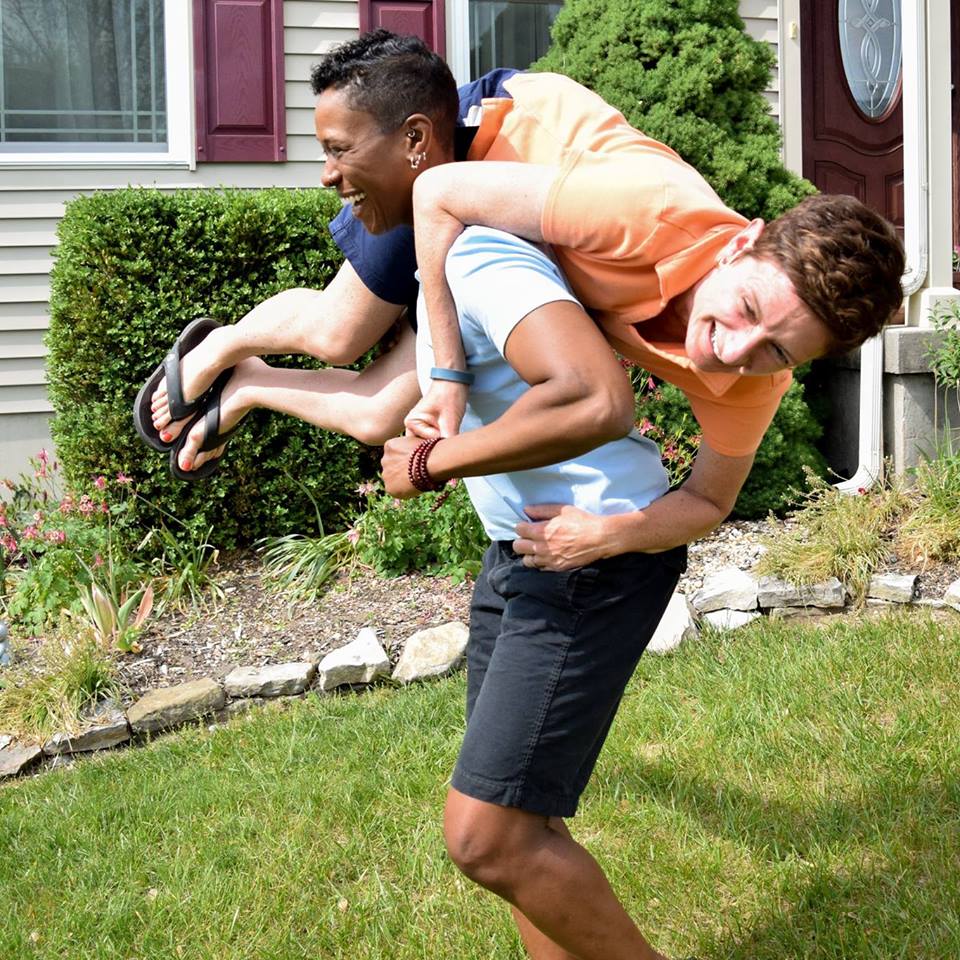 Sandra Lawson with Susan Hurrey, her non-Jewish fiancee, who said she has considered converting to Judaism but remains undecided. Photo courtesy of Susan Hurrey

So it helped that her rabbinical school would have no problem with Lawson’s falling in love with Susan Hurrey, her non-Jewish fiancee.

To make Lawson feel comfortable when she moved into her Philadelphia home in 2013, Hurrey — a court reporter who identifies with no religion — bought Lawson two mezuzahs, doorpost markers containing verses from the Hebrew Bible found at the entrance of Jewish homes.

The two met through OK Cupid, the online dating service, where Lawson had written “somewhat serious” under “religion,” a huge understatement. Hurrey still teases Lawson about it, but explained, “She didn’t want to scare anybody off.”