When confronted with shifting social awareness and facing change, Christian thought leaders befuddled by the trans community in their midst could take a lesson from a poet.

Pablo Neruda said, “They can cut all the flowers, but they can’t stop the spring from coming.”

The church is on the brink of a spring in which congregations seek ways to be inclusive. For us to be fully inclusive, we have to engage the trans voices in our pews.

Here’s a 7 of the many trans Christian voices we need our churches to hear. Each of these individuals have unique stories and experiences but they all have on thing in common — their devotion to their faith.

In 2013, after 15 years as a religion professor, Adam was released his position at Azusa Pacific College after he announced he would pursue transitioning. Since then, Adam has been a pioneer in the trans Christian world, serving as a board member for Safety Net and giving numerous talks on the intersection of faith and transgender identities.

Here is a speech he gave on being trans and Christian:

Jayce knew he was trans and a Christian and choose to go to his Christian college, George Fox University. In 2014, After changing his gender legally to male, he requested to change his housing to his gender. The school denied his request. Jayce sued and, unfortunately, lost his case due to the school being granted a religious exemption to deny the gender appropriate housing.

Since then, Jayce has begun public speaking on his trans and Christian identities and sharing his story.

Mekhi runs a YouTube channel to discuss various topics about his transness. To answer a question from one of his followers, Mekhi discussed his ability to reconcile his trans identity with his Christian beliefs.

“Continue to develop your relationship with God despite what others tell you,” Mekhi says.

Why does Adam stay in the church? In this faith and religion video, Adam explains his faith tradition and why he stays in it despite anti-trans sentiments from some.

An ordained pastor, Allyson is a sought out trans Christian speaker. She’s recently keynoted at the Reformation Project in DC and has been a pioneer for trans inclusion in the military.

Here she is in a short MSNBC feature, billed as “America’s most radical preacher”

I’ve come to know Austen recently and he’s become a close friend of mine. His work has been really influential to me in learning about trans Christians. Austen posts a new video on the subject of being trans and Christian every week. His series on YouTube on the transgender community and Christianity is perhaps the most comprehensive on YouTube.

This video is of Christian trans woman Lisa as she is on her way to a transgender of faith retreat. Sharing her story as she reconciled her gender identity and faith, Lisa says it was scripture that helped her during her transition. 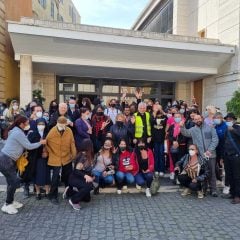 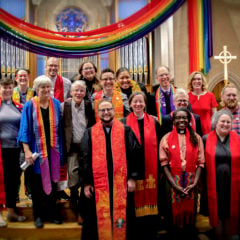 Arts & Culture
This Jewish summer camp welcomed a 12-year-old transgender camper
Follow us on Facebook!
Submit your photos to RNS