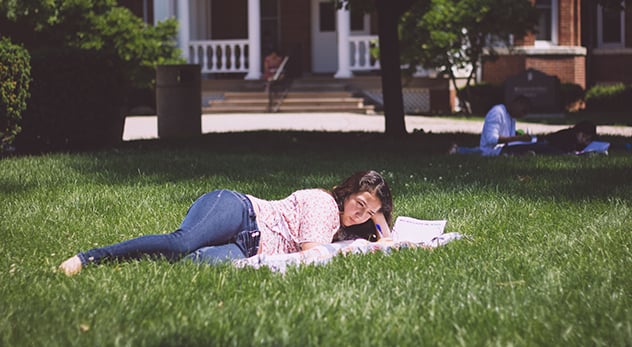 “We couldn’t be happier to receive this grant from L’Engle’s Crosswicks Foundation,” says Paul Canaday-Elliot, a OneWheaton board member. “Wheaton tells a very one-sided narrative about LGBT persons without making room for dialogue. So this will help us continue to supply something that the college isn’t.”

Many see the success of OneWheaton as further proof of increasing openness on matters related to homosexuality among America’s young faithful. This significant donation from the legacy foundation of such a prominent Christian may further bolster such claims.

Canaday-Elliot said the Crosswicks’ grant was unsolicited. Charlotte Jones Voiklis, L’Engle’s granddaughter and Crosswalks director, was researching Wheaton College online in January and “began wondering whether the college reflected her grandmother’s intellectual legacy.” As a result, she stumbled upon the OneWheaton website, which led her to contact the organization and eventually award the grant.

The Crosswicks Foundation has never publicly announced a grant award, making their gift to OneWheaton even more significant. Attempts to reach Crosswicks via telephone and email were not immediately returned, but the following quote from Voiklis was posted on OneWheaton’s private Facebook page: “My grandmother had a long and deep relationship with Wheaton College and its English Department, and she was enriched by some of the vigorous debates she had with faculty and students there. I believe that the kinds of conversations OneWheaton is seeking to have reflect where she would be if she were still here.”

Located outside of Chicago, Wheaton is America’s most prestigious evangelical Christian college, boasting prominent graduates such as evangelist Billy Graham. Their library possesses a large collection of manuscripts, photographs, and artifacts from the life of Madeleine L’Engle, who was a devout Episcopalian before her death in 2007. Wheaton’s provost Stanton Jones did not want to comment on OneWheaton specifically, but released the following statement in reaction to the grant:

The decision of the board of the Madeleine L’Engle family foundation to grant funding to other organizations bears no direct relationship to Wheaton College’s Special Collections serving as a repository for the papers of respected Christian author Madeleine L’Engle. We hold papers and other effects of a wide array of Christian authors whose work overlaps with our institutional mission; we do so without insisting that those authors or their descendants allign with every aspect of our institutional identity. The wide array of authors and public figures – including Frederick Buechner, Jacques Ellul, Malcolm Muggeridge, and others in our Special Collections, C.S. Lewis, Owen Barfield, and others in our Wade Center, and Rev. Billy Graham and a wide array of figures and organizations in our Billy Graham Center Archives – together represent a range of perspectives on any number of contemporary issues.

The first OneWheaton event funded by the Crosswicks grant will be a public forum coinciding with Wheaton’s homecoming this October. Canaday-Elliot said the group is not ready to release details about the event just yet, but information posted to the group’s private Facebook page says it will be a moderated discussion between Matthew Vines, an author and speaker who attempts to make a biblical case for same-sex relationships, and Wesley Hill, a seminary professor and leader of a growing movement of LGBT Christians promoting holiness through celibacy.

Only a portion of the grant will be used to fund the October event. Plans for spending the remainder have not been finalized. But once it has all been allocated, OneWheaton leaders hope to fill the coffer with more from other donors.

“OneWheaton has recently achieved non-profit status,” says Canaday-Elliot. “While we don’t have a grant strategy at this point, we plan to apply for more.”