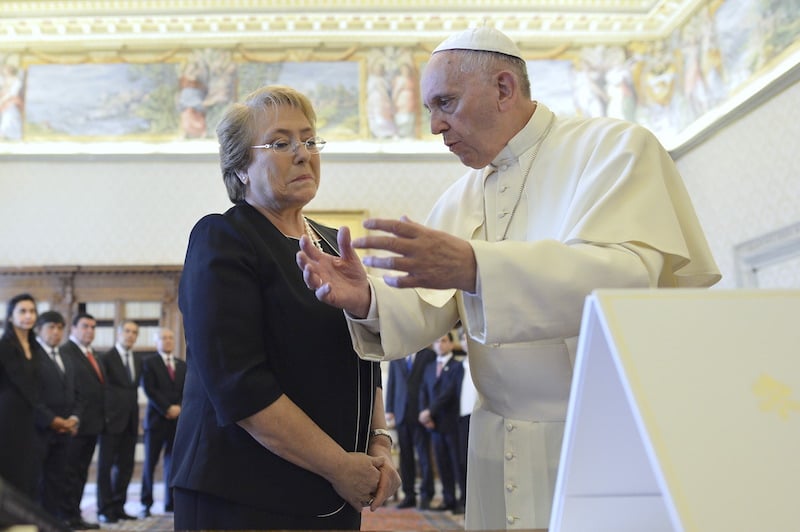 VATICAN CITY (RNS) Pope Francis on Friday (June 5) met Chilean President Michelle Bachelet, while outside in St. Peter’s Square anti-abortion protesters drew attention to one of the most controversial topics up for discussion between the two leaders.

The meeting centered around “issues of common interest” such as education and "social peace," as a Vatican statement put it. But the most contentious topic in play was “the protection of human life,” a nod to the traditionally Catholic country's strict abortion law, which Bachelet is trying to modify.

Earlier this year, the Chilean leader proposed changes to allow abortions in cases of rape or if a woman’s life was in danger.

About two dozen protesters outside the Vatican on Friday, dressed in white and clutching makeshift baby coffins, pointed to the strong opposition she faces at home over the proposals.

It was unclear how much time the two leaders spent talking about abortion, or whether they touched specifically on the changes Bachelet is backing. But their private encounter lasted 47 minutes, an unusually long time, and they are both native Spanish speakers and could converse with ease.

The Vatican statement described the wide-ranging talks as "cordial" and afterwards Bachelet said the meeting was "wonderful."

She said they discussed Francis' planned visit to Chile in 2016, when he is also expected to visit Uruguay and return to his native Argentina for the first time since he was elected pope in 2013.

She cited poverty, the family and social inequality as other topics of discussion, and "about the crisis in trust and representation and about how politics and morality can help build a more just society.”

That morning in St. Peter's Square, about 20 anti-abortion activists, women known as the Mujeres de Blanco, lay down on the ground to form a cross and prayed in protest against the loosening Chile's abortion law, Vatican Insider reported.

But Chile’s hard-line approach came under international criticism in 2013 when an 11-year-old rape victim was refused an abortion.

Bachelet’s predecessor, Sebastian Pinera, at the time praised the girl for her “maturity,” while rights group Amnesty International urged the government to let her terminate the pregnancy.

Related Posts
By Thomas Reese
Catholic bishops reprimand Trump as often as they praise him
By Associated Press
Retired Pope Benedict XVI ill after visit to Germany
By Amy Klein
What good is faith when your fertility treatments aren't working?
By Adelle M. Banks
Promise Keepers stages a comeback on screens instead of in a stadium
By Claire Giangravé
Seven years later, still no trace of Jesuit priest kidnapped in Syria