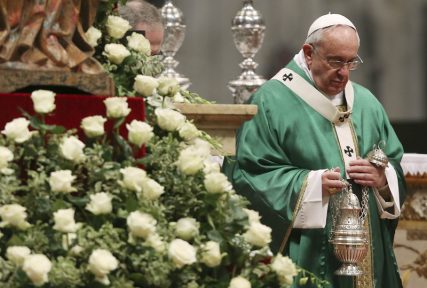 BARCELONA (Reuters) A “People’s Pilgrimage” to highlight the effects of climate change and an upcoming papal encyclical on the environment aim this month to invigorate political will for an ambitious new deal to curb global warming.

On Monday, former Philippines’ climate change commissioner Naderev “Yeb” Saño kicked off a six-month journey around the world to places hit hard by climate change, beginning in the Pacific island state of Vanuatu, still struggling to recover from the devastation caused by Cyclone Pam in March.

The ex-negotiator, who grabbed the limelight at 2013 U.N. climate talks with emotional pleas and fasting after Typhoon Haiyan, said he and thousands of other “climate pilgrims” from Europe and beyond planned to converge in Paris before the Nov. 30 start of the U.N. conference where a new climate accord is due to be sealed.

“We feel the missing element is the moral aspect of climate change and… the planetary environmental problem, so we think that galvanizing global public opinion, especially across religions, can give this process the moral push,” he told the Thomson Reuters Foundation before heading to Vanuatu.

There he participated in a meeting on the Greenpeace ship Rainbow Warrior with Vanuatu’s president and community leaders from Pacific island states to develop a regional climate action plan in the wake of the Cyclone Pam disaster.

After stepping down from the Philippines government in April amid speculation over policy rifts, Saño joined a global multi-faith climate campaign called “OurVoices,” which unites people from many religions, including Catholics like himself, Muslims, Hindus, Buddhists and Protestants.

Climate change has begun to motivate religious leaders and believers over the past two years because “it has become an issue with a human face” as the effects of extreme weather – such as Typhoon Haiyan in the Philippines – and sea-level rise have become clearer, he said.

Saño plans not only to visit places of human suffering but also those where climate action is being taken, including efforts to boost renewable energy in India and Qatar, and to protect natural treasures like Australia’s Great Barrier Reef.

He will ride a bicycle from Kenya to Mozambique and tour the United States, before embarking on a final 1,100 kilometer (680 mile) walk from Rome to Paris.

The organizers of the People’s Pilgrimage said anyone can undertake their own journey, and share the details via an interactive website: http://peoplespilgrimage.org/

These travels will be counted towards a global total to represent a walk at least once around the world, “so as to show our leaders how small and precious our planet is,” said Ciara Shannon, Asia coordinator for OurVoices.

Saño will also take part in an inter-faith march in Rome on June 28 to celebrate the Pope’s encyclical, or formal letter, on human ecology, which will be released on June 18.

Saño said it was “exciting” that not only the world’s 1.2 billion Catholics are awaiting their leader’s views on climate change and sustainability, but people of other faiths too.

As a member of the Global Catholic Climate Movement, Saño said he had received indications the encyclical would focus on poverty and climate justice, and how to solve climate change by tackling inequity.

He hoped the document would “make concrete recommendations and call for concrete action” at the Paris climate conference and beyond.

“It will be a game-changer,” he predicted.

Saño said he is in contact with French authorities about how to use the pilgrimage to help reach an ambitious outcome in Paris in December.

But the movement will need to continue beyond then, as the new climate agreement will not be sufficient to limit global warming to safe levels, he emphasized.

“I think Paris needs to be portrayed as the start of a new era of cooperation, because I don’t think the multilateral (U.N.) system can come up with a once-and-for-all 2015 agreement that can stop climate change. It’s just practically and politically unfeasible,” he said.

“Paris is not our destination. Our real destination will be the hearts and minds of people, so our journey continues even after Paris,” he added.