The Rev. Steve Heiss, retired pastor at Tabernacle United Methodist Church in Binghamton, N.Y., officiated at the July 2, 2002, commitment ceremony of his daughter to another woman. Photo courtesy Steve Heiss

(RNS) An Upstate New York bishop has dismissed a 2013 complaint that accused a retired United Methodist pastor of breaking church law by officiating at several same-sex weddings, including his daughter’s.

Bishop Mark J. Webb’s May 26 decision to dismiss charges against the Rev. Steve Heiss eliminates a costly and controversial church trial, which in other cases has highlighted the denomination’s divisions over ministering to gays and lesbians.

The decision also points to growing momentum among U.S. Methodist bodies to change church law, which forbids the ordination of LGBT ministers and bars its pastors from officiating at same-sex weddings.

Other Methodist conferences, or regional bodies, meeting across the country have taken similar votes:

Some conferences went in the opposite direction:

Some expressed disappointment with the decision to dismiss the complaint against Heiss. John Lomperis, program director at the Institute on Religion and Democracy, said the decision shows the denomination’s lack of accountability.

“None of this changes the fact that the United Methodist Church affirms biblical standards for sexual self-control,” he said. “We expect our clergy to honor these boundaries God gave us for our own good.”

But on the whole, supporters of LGBT inclusion seemed to get a bigger boost.

Heiss, who retired last year as pastor of Tabernacle United Methodist Church in Binghamton, N.Y., in the Upper New York Conference, said he was not asked to stop performing gay marriages. 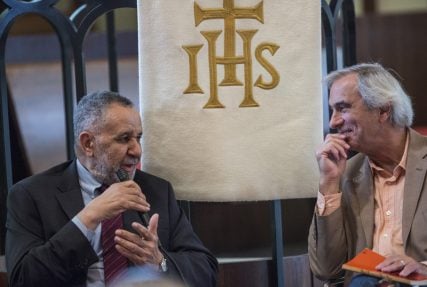 The Rev. Gil Caldwell, left, an 81-year-old retired United Methodist pastor who is supportive of LGBT rights, and Jimmy Creech, who was defrocked by the United Methodist Church for presiding at gay marriages, speak on April 18, 2015, during the Jack Crum Conference, a social-justice gathering of the North Carolina chapter of the Methodist Federation for Social Action at Epworth United Methodist Church in Durham. Religion News Service photo by Travis Long

“I have four weddings scheduled this summer,” he said. “One is a gay couple. I’m not hiding anything.”

Supporters of LGBT rights scored another symbolic victory in Raleigh, N.C., when leaders of Fairmont United Methodist Church voted unanimously earlier this month to join the Reconciling Ministries Network, which is dedicated to the inclusion of people of all sexual orientations and gender identities.

Back in 1990, Fairmont expelled its pastor, the Rev. Jimmy Creech, for his work advocating on behalf of gays and lesbians. A church trial later defrocked him for presiding at the wedding of a lesbian couple at a Methodist church in Omaha, Neb.

Creech said he was delighted his old church had moved toward accepting LGBT people.

“It’s a marker of how history changes — how perceptions, attitudes and people’s comfort levels change over time,” said Creech, who lives in Raleigh. “It’s instructive and inspiring.”