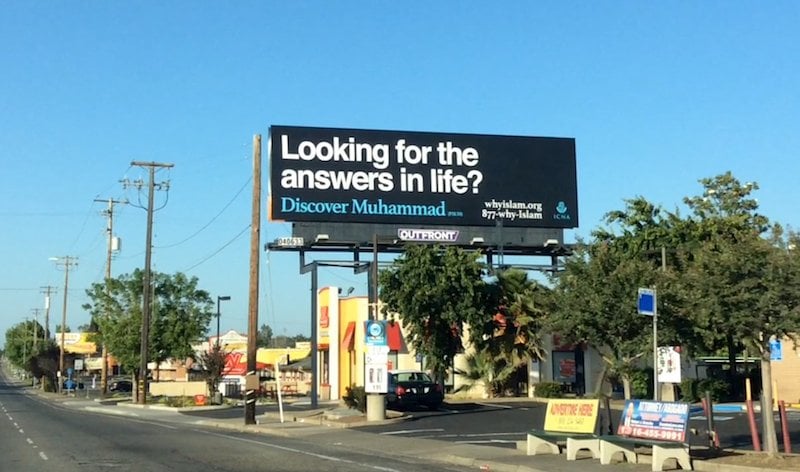 A billboard sponsored by Islamic Circle of North America is shown on a street in Sacramento, California in this undated handout photo, courtesy of Reuters

SACRAMENTO, Calif., (Reuters) – In California’s capital city of Sacramento this month, stark black billboards loomed over highways and faded commercial strips, offering solace to the troubled: “Looking for the answers in life?” one asked. “Discover Muhammad.”

With messages that are part religious invitation to explore the Muslim faith and part public relations, the billboards anchor a national campaign to showcase Islam as a religion of love and tolerance, aimed at Muslims and non-Muslims alike.

But the campaign to publicize the Muslim Prophet’s message by the mainstream Islamic Circle of North America, which is sponsoring about 100 billboards from Philadelphia to Baltimore, Atlanta and Miami, could also spark a backlash amid a spike in anti-Islamic sentiment marked by protests, advertising campaigns and sometimes vandalism and violence.

A previous billboard campaign by ICNA two years ago invited Americans to see similarities between Christianity and Islam, which views Jesus as a prophet but not as the son of God as Christians do. A campaign by another U.S. Muslim group tried to show non-violent interpretations of jihad, such as a holy struggle to lead a moral life.

“We thought a proper approach would be to actually educate the larger public about his personality, which exemplifies love and brotherhood,” said Waqas Syed, ICNA Deputy Secretary General.

The billboard campaign is not the first high-profile bid by a Muslim group to bolster Islam’s image in America, tarnished by militant attacks. But it is the largest such effort by ICNA, the group most closely identified with billboard campaigns in recent years, and it includes some billboards that are clearly evangelical.

“Under the circumstances, it’s a pretty bold move,” said Todd Green, a professor who studies Islamophobia, or fear of Islam, at Luther College in Iowa. “When you’re a minority religion, you face a lot of pressure from the majority population not to proselytize.”

By asking Americans to discover Mohammad, the campaign is similar in some ways to efforts by evangelical Christians whose roadside billboards, especially in the U.S. heartland, have sought to draw Americans into their fold with messages promoting Jesus as the Messiah, he said.

Organizers said they launched the program as a response to a deadly Paris attack by Islamist militants on the French satirical magazine Charlie Hebdo in January over its anti-Muslim cartoons, aiming their message in part at other Muslims to say that violence is not an appropriate response to provocation.

By coincidence, the first billboards went up days after two U.S. Muslim gunmen were killed in May as they tried to attack a Texas exhibit of cartoons depicting Mohammad, and shortly before heavily armed anti-Islam protesters demonstrated outside a Phoenix mosque.

Some signs, like those in Sacramento, are clearly invitations to explore the Muslim faith while others aim to portray Mohammad as a supporter of women’s rights and religious tolerance.

“Kindness is a mark of faith,” a billboard in Elizabeth, New Jersey, reads. In Miami, another offers, “Muhammad believed in peace, social justice, women’s rights.”

Sharing that view of Mohammad is more important to ICNA than proselytizing, Syed said, though newcomers who want to convert would be welcomed.

Muslims make up 0.9 percent of the U.S. population, but the number is expected to double by 2050, driven by immigration, high birth rates and a young population, the Pew Research Center says.

The first wave of signs, including those in Sacramento and Los Angeles, came down last week. New ones will be posted in San Francisco, Dallas and other cities in coming weeks. Despite tensions, the billboards have not been defaced, and negative responses have been few, said Imam Khalid Griggs, vice president of ICNA and leader of a mosque in North Carolina.

Last week, a group that fears radical Islam will grow in the United States erected billboards around St. Louis showing cartoon drawings of Mohammad, meant to flout the religion’s ban on depicting his image. In February, a Washington, D.C. mosque was vandalized twice in one week.

In Elizabeth, New Jersey, where one ICNA billboard went up, Tyler Coltelli, a 23-year-old Catholic, said the sign made him uncomfortable: “You should be able to practice your own faith, but I don’t necessarily agree with trying to convert people from the streets.”

But Bodia Wardany, a parishioner at the Salam Islamic Center in Sacramento said: “I think it’s a great idea, considering all the misperceptions about the faith and the terrorist, fanatical groups misrepresenting the faith itself.” (Additional reporting by Sebastian Malo in Elizabeth, New Jersey and Laila Kearney in New York; Editing by Cynthia Johnston and Lisa Lambert) 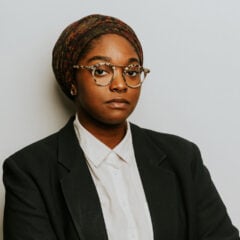