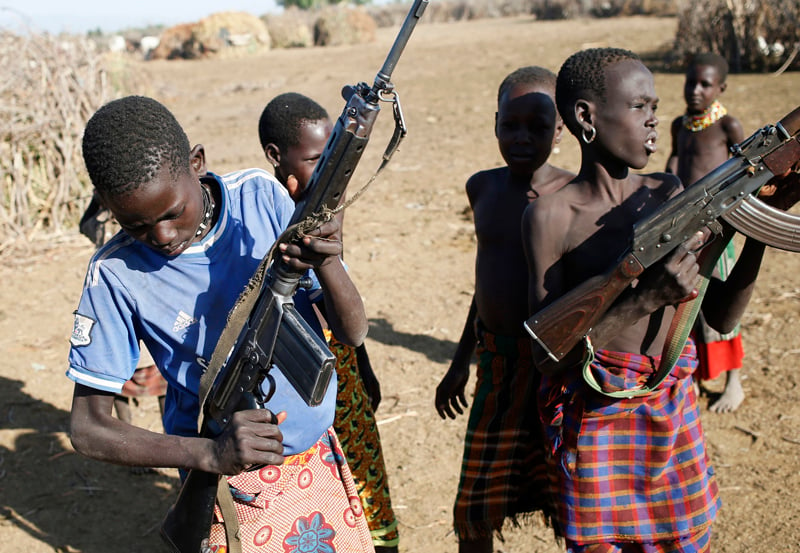 Turkana boys play with rifles in a village inside the Turkana region of the Ilemi Triangle, northwest Kenya on December 21, 2014. Photo courtesy of REUTERS/Goran Tomasevic *Editors: This photo may only be republished with RNS-ALSHABAB-KENYA, originally transmitted on June 22, 2015.
June 22, 2015
Tonny Onyulo

Turkana boys play with rifles in a village inside the Turkana region of the Ilemi Triangle, northwest Kenya on December 21, 2014. Photo courtesy of REUTERS/Goran Tomasevic
*Editors: This photo may only be republished with RNS-ALSHABAB-KENYA, originally transmitted on June 22, 2015.

NAIROBI, Kenya -- Three years ago, Solomon Osman woke up in a dimly lit room in Garissa, Kenya, after armed men grabbed him and stuffed him into a truck as he was selling clothes on the street in Mombasa 280 miles away.

He said al-Shabab, the Somalia-based radical Islamic terrorist group that killed 148 students and others at Garissa University College in April, had kidnapped him and 20 other youths.

“We lost our senses, only to wake up in a mosque in an unknown place,” he said. “We were all forced to convert to Islam, given new Muslim names and scarves and warned not to contact anybody outside the mosque.”  Osman previously had been a Christian.

Osman, who surrendered to the Kenyan government earlier this month following an amnesty offered to al-Shabab fighters, said his captors subjected him to three months of training with AK-47 rifles, rocket-propelled grenades and other weapons.

Some of the other approximately 150 youths in Osman’s group might have volunteered to join the extremists. But most were pressed into service, he said.

“Our masters told us that Kenya was the targeted enemy because it had invaded Somalia,” he said, referring to Kenyan troops stationed in Somalia since 2011 to help Somali government forces fight al-Shabab. “He said it was our right to fight for our religion.” 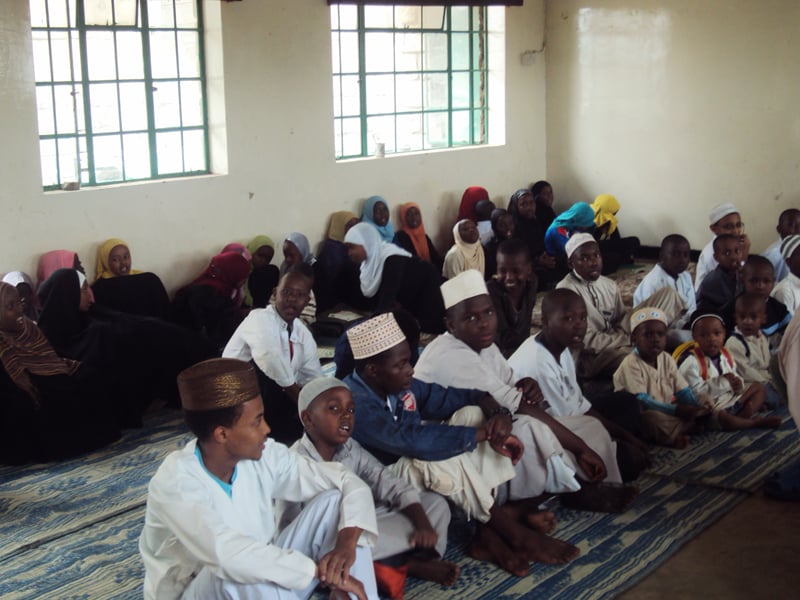 Muslim children in a Madrasa in Garissa in northern Kenya studying Sharia law. Islamic militants staged a deadly attack in the town in April. The Kenyan government is keeping a close eye on courses like these in a campaign against radicalization. Religion News Service photo by Tonny Onyulo

Osman’s story suggests disturbing new possibilities about the number of radicalized Kenyans and their future plans, just as the country is still grappling with how to best counter increasingly emboldened militants in the wake of the attacks at  Garissa University that left 148 dead in April. Gunmen took hundreds of students hostage, and killed those who identified as Christians.

In its amnesty offer, the government gave individuals who went to train with al-Shabab 10 days in return for reintegration, then extended the deadline another two weeks. Interior Cabinet Secretary Joseph Nkaissery said youths who fail to report "will be treated as criminals living in our midst and will face the full force of the law," according to media reports.

So far, around 255 people have left to join al-Shabab since 2013, according to Kenya’s Interior Ministry. Eighty-five youths surrendered following the amnesty, meaning 170 fighters are potentially roaming the country and ready to strike elsewhere.

A handful of al-Shabab militants staged the 2013 Westgate shopping mall attack and three-day-long siege in Nairobi that resulted in 67 deaths.

Most of 170 missing extremists hailed from Garissa, a town near the Somali border where al-Shabab purportedly has often fled to escape the Somali government forces.

“We don’t know their whereabouts,” said Garissa County Commissioner Abdi Hassan. “We’ve intelligence that shows they joined al-Shabab. We encourage parents to continue reporting incidents of their missing children to the government.”

The terrorist group has long been recruiting young men throughout Garissa.

“Al-Shabab militants are no longer focusing only on mosques, schools or madrassas for recruitment but also our football grounds,” said Adan Duale, the Kenyan parliament's majority leader, and lawmaker from Garissa. “Parents should be on the lookout on what their children are doing on these sports grounds.”

Poverty plays a major role in the lure of terrorism.

The unemployment rate in Kenya is 40 percent, with young people suffering even higher levels, according to government statistics. In 2006, before the worldwide recession hit two years later, unemployment was less than 13 percent.

More people, especially young men, will flock to the militants if the government fails to tackle the unemployment issue, said analysts.

“Al-Shabab are targeting youths who are idle and languishing in poverty and depression,” said Prof. Edward Kisiang’ani, a political scientist at Kenyatta University in Nairobi. “All it takes is a strategy to give them a passionate cause or belief of fighting injustice and we have on our hands the extremes of radicalization.”

Kenyan Muslims -- around 11 percent of the country’s population -- and the approximately 600,000 Somali refugees in Kenya who have fled their war-torn homeland have also complicated the authorities’ search for militants.

Ethnic Somalis easily cross back and forth over the Kenyan-Somali frontier, providing a route for al-Shabab members. Many Kenyans believe that some ethnic Somalis in Kenya have joined al-Shabab and are awaiting orders from their leaders to carry out terror attacks, prompting Kenyan politicians to call for the ouster of Somali refugees.

The Kenyan government might have contributed to the problem, too, say analysts. Around 4,000 Kenyans recruited six years ago to fight alongside Somali troops have returned home bitter after the government failed to pay their salaries.

Osman, who fled to Kenya when al-Shabab ran out of money, said he did not want to work for the militia group when he was abducted. But then they promised him a steady wage. “I didn’t like it, but when I arrived in Somalia, I was promised a monthly salary of $1,000,” he said. “This changed my mind and I vowed to work for the group.”

He said he came to accept their harsh version of Islam but has since softened his views.

“Mohammed himself fought the jihad war and won,” he said. “It’s commanded that we should also kill all non-believers to inherit the kingdom of Allah and get preserved virgins. I participated in several attacks but not in Kenya because I believed in all the teachings of revenge. But now I live in fear of being tracked by the militants because I ran from the camp.”

Kenyan authorities are now acting swiftly to crack down on al-Shabab based on intelligence gleaned from ex-fighters and others.

Tolle vanished from his home in 2013 and returned last month carrying Somali currency, Arabic literature and documents showing he traveled to Somalia. He claims he did not go to Somalia and converted to Islam in Garissa.

Muhia also said he arrested several youths of Somali origin who have been living in a one-room apartment where they were being radicalized by an al-Shabab imam in Mombasa. It’s not clear if they are among the 170 unaccounted-for fighters.

“We raided the house after a tip-off from the public,” he said. “We found and arrested the imam and the youths who hail from northeastern Kenya. We suspect the youths were from Garissa.”