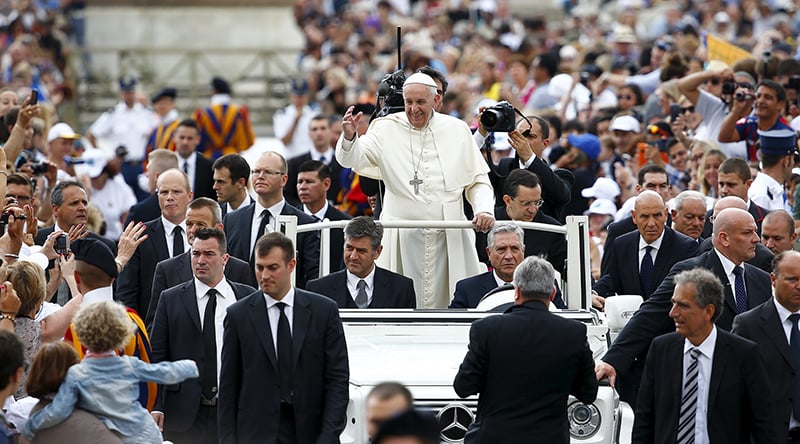 Pope Francis waves as he arrives to lead the weekly audience in St. Peter’s Square at the Vatican on June 24, 2015. Photo courtesy of REUTERS/Tony Gentile
*Editors: This photo may only be republished with RNS-POPE-DIVORCE, originally transmitted on June 24, 2015.

VATICAN CITY (RNS) Pope Francis said Wednesday (June 24) that there are times when it is “morally necessary” for couples to separate, as part of the pontiff’s broader reflection on how to protect children from quarreling parents.

Speaking to crowds in St. Peter’s Square, Francis said that in some cases “separation is inevitable” and “can even become morally necessary” at times.

The pontiff was clear in specifying the extreme cases in which he saw family breakdown as justifiable: “when it comes to saving the weaker spouse, or young children, from more serious injuries caused by intimidation and violence, by humiliation and exploitation, by lack of involvement and indifference.”

His comments came as part of a wide reflection on conflicts within families — “the most ugly thing!” — during which he focused on the lifelong damage wrought on children whose parents fight.

“When the father and mother harm each other, children’s souls suffer greatly, feeling a sense of desperation. And they are wounds that leave a lifelong mark,” the pope said.

Francis warned parents that showering their children with gifts to apologize for their quarreling would not solve their problems and risked further harming the family. “The more one looks to compensate with presents and candy, the more the sense of injury is lost — more painful and deeply — to the soul,” he said.

The questions posed by the pontiff come as part of the Catholic Church’s broader reflection on the modern-day family, with heated debate over how the Vatican should respond, to divorcees and gay couples in particular.

The Holy See on Tuesday released a lengthy document on the family, collating Catholics’ views on the topic after a high-profile meeting of leading church officials last fall.

Although the paper touches upon the possibility of opening Communion to divorced Catholics who have remarried outside the church, the issue will likely be the subject of further heated debate at the next such meeting — known as a synod — in October.

The working document firmly rejects welcoming gay couples into the church, suggesting there will be little change in the Vatican’s position on same-sex unions.