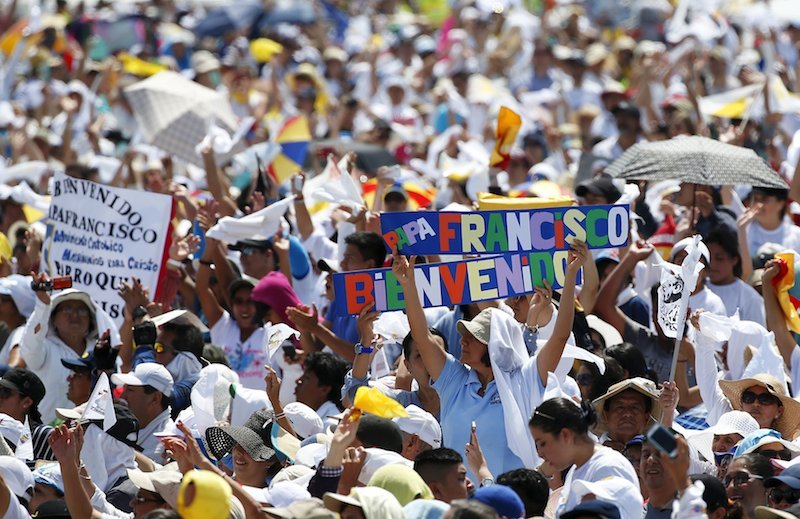 Quito crowds hoist a banner that reads “Welcome Pope Francis” as he arrives to lead a mass in Guayaquil, Ecuador. Photo by Alessandro Bianchi coutresy of Reuters

GUAYAQUIL, Ecuador(Reuters) – Pope Francis used his first Mass in Ecuador on Monday to ask for support in his efforts to reach out to Catholics who feel shunned by the Church when the world’s bishops gather at the Vatican in October.

Speaking to 800,000 people on the first leg of his “homecoming” tour of South America, the 78-year-old pope weaved his homily around the theme of the family, which will be the subject of the month-long synod at the Vatican.

The meeting is expected to discuss ways to reach out to Catholics who have divorced and remarried outside the Church. Under current rules, they are prohibited from receiving communion unless they abstain from sexual relations.

The gathering is also expected to discuss how the Church should reach out to homosexual Catholics.

The pope said the synod “would consider concrete solutions to the many difficult and significant challenges facing families in our time.”

He asked for prayers for the synod “so that God can take even what might seem to us impure, scandalous or threatening and turn it … into a miracle. The family today is in need of a miracle.”

Conservative bishops oppose any changes regarding the divorced and remarried. At a preparatory meeting last year they botched conciliatory language on the pastoral care of gay couples.

Asked about the pope’s words on the synod, the Vatican spokesman said Francis was not referring to specific controversies but that he wanted the synod to find ways “to help people move from a situation of sin to a situation of grace.”

The Argentine-born pontiff delivered his remarks in Ecuador’s second city Guayaquil, a steamy port sometimes referred to as the world’s “banana capital.”

In line with his simple style, Francis rode into the city in a small silver Fiat marked for the occasion with Vatican City number plates – “SCV 1” – standing for Stato della Citta del Vaticano or State of Vatican City.

Tens of thousands of people lined the route from the airport, at times rushing police to touch the car and throw flower petals before it.

His eyes often squinting in the sun, Francis switched to an open jeep when he reached the sprawling Mass site and rode though the crowd, which authorities estimated at about 800,000.

“I’ve come to this spiritual encounter to ask the pope to heal me because I have cancer,” said Franklin Borbor, 48, who despite his illness traveled more than five hours to find his place in the park.

Others came from as far away as Chile, Peru, Colombia and Mexico.

In his homily, the pope also called for a rekindling of family values and solidarity with the elderly, the abandoned and the unemployed.

“How many of our adolescents and young people sense that (love and happiness) are no longer found in their homes? How many women, sad and lonely, wonder when love left, when it slipped away from their lives? How many elderly people feel left out of family celebrations, cast aside and longing each day for a little love?” he said.

He said the family was the “best social capital” and could not be replaced by other institutions.

After the mass, Francis went to a Jesuit-run school to visit an old friend he has not seen in three decades, the cigar-smoking Rev. Francisco Cortes.

When he was a seminary director in Argentina, Francis, then Father Jorge Bergoglio, would send seminarians to the school to study theology with Cortes, now a diminutive 91-year-old Spaniard affectionately known as “Father Paquito.”

The pope’s visit to Guayaquil took on extra significance for Ecuador, and its leftist President Rafael Correa, given it has been the epicenter of anti-government protests for weeks.

Francis was to hold talks with Correa later on Monday.

Thousands have been taking to the streets in Guayaquil and elsewhere to protest tax changes and what they see as state authoritarianism. Correa says the reforms will only affect the super-wealthy and accuses his foes of seeking a coup d’etat.

Protest leaders have called a truce during the papal visit.

“The pope’s coming is putting a bit of peace in the hearts of we Ecuadoreans,” said Jose Paldarreaga, 64, a participant at the Mass in Guayaquil.

After Ecuador, the pope visits Bolivia and Paraguay on a tour encompassing three of the poorest and smallest countries in South America. The pope visited Brazil for a youth festival in 2013 but that was to substitute for predecessor Benedict after his sudden resignation.