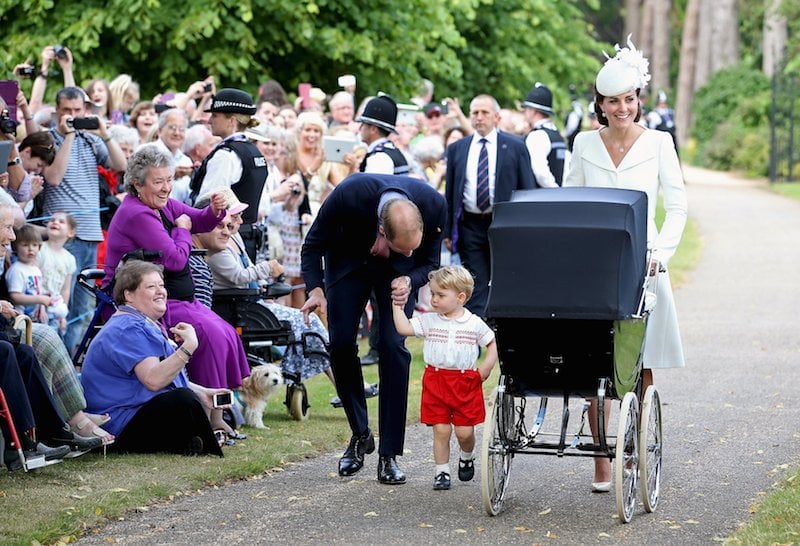 Britain's Prince William bends down to his son Prince George as he leaves with his wife Catherine, Duchess of Cambridge, and their daughter Princess Charlotte after the christening of Princess Charlotte. Photo by Chris Jackson courtesy of Reuters
July 6, 2015
Reuters

Britain's Prince William bends down to his son Prince George as he leaves with his wife Catherine, Duchess of Cambridge, and their daughter Princess Charlotte after the christening of Princess Charlotte. Photo by Chris Jackson courtesy of Reuters

LONDON (Reuters) -- Britain's Princess Charlotte, the baby daughter of Prince William and his wife Kate, was christened on Sunday as crowds gathered to witness the family's first public outing together since her birth in May.

The ceremony took place at St Mary Magdalene Church on the Sandringham estate in eastern England, where William and Kate, the Duke and Duchess of Cambridge, have a country home.

Television pictures showed members of the public clapping, cheering and taking photographs as William and Kate left the church with Britain's newest royal, who is fourth in line to the throne, and her older brother George.

The princess's full name, Charlotte Elizabeth Diana, is a nod to her late grandmother Princess Diana and her great-grandmother Queen Elizabeth.

Charlotte left the church in a black pram pushed by Kate, while the one-year-old George, dressed in bright red shorts and a white embroidered shirt, walked hand-in-hand with his father.

William's office said the couple had chosen five friends and family members to be Charlotte's godparents.

The christening was conducted by Archbishop of Canterbury Justin Welby, the spiritual head of the Anglican Church, who also oversaw the christening of Prince George.

The princess wore the same christening robe that George had worn. The lace and satin gown, made by Queen Elizabeth's dressmaker, is a replica of one first used by the royal family in 1841.

After the ceremony, the duke and duchess planned to serve their guests slices of cake from a tier of the couple's wedding cake, the statement from William's office said.