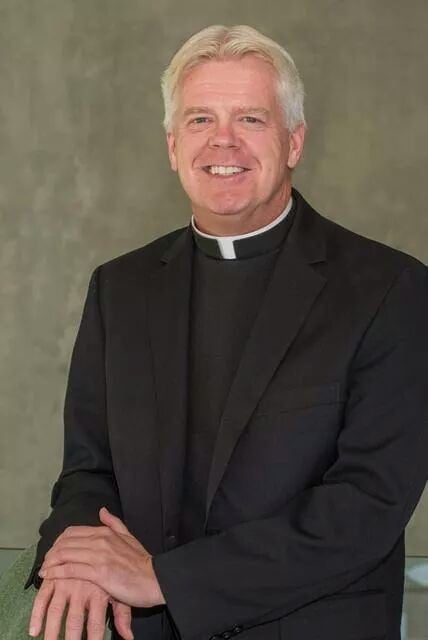 In May, the Rev. Warren Hall was abruptly dismissed from his position as the popular campus chaplain at Seton Hall University in New Jersey because the Catholic archbishop of Newark said his advocacy against anti-gay bullying, and his identity as a gay man, undermined church teaching. Photo courtesy of Warren Hall

(RNS) A gay Catholic priest who was dismissed from his position as campus chaplain at Seton Hall University because of his work against anti-gay bullying has been named to a job serving two parishes after weeks of uncertainty over his fate.

The Rev. Warren Hall, whose firing by the archbishop of Newark, N.J., added to growing concerns about the church’s treatment of gay people, tweeted that he was “thrilled” with the posting at Sts. Peter and Paul Church in Hoboken and its sister parish, St. Lawrence in neighboring Weehawken. Both parishes are on the Hudson River across from lower Manhattan.

Hall will serve as parochial vicar, which means he will assist the pastor of the two parishes, the Rev. Bob Meyer. Meyer and Hall have known each other for years and St. Lawrence was one of the churches where Hall already had been helping out after he lost his Seton Hall job.

“I received many welcoming messages from enthusiastic parishioners of both parishes,” he told Religion News Service. “I’m looking forward to getting on with my ministry there.”

A controversy erupted after Newark Archbishop John Myers phoned Hall in May, while the priest was giving an exam to students in his sports and spirituality class, to tell him that he would no longer be the campus chaplain.

Myers told Hall his decision stemmed from concerns over a picture the priest posted of the “NOH8” symbol on Facebook last fall. “NOH8” stands for “no hate,” and it grew out of the battle over banning gay marriage in California.

Hall posted the photo after attending an anti-bullying workshop and he stressed that he was not advocating against any church teachings.

Later in May, Hall, 52, came out as gay. He said he remains committed to his vocation as a priest and committed to his vow of celibacy. James Goodness, a spokesman for the archbishop, responded by saying that “someone who labels himself or another in terms of sexual orientation or attraction contradicts what the Church teaches.”

In July, Hall wrote to Pope Francis urging the pontiff to address the concerns of LGBT Catholics, especially the rash of firings of openly gay church workers, when he makes his first U.S. trip Sept. 22-27.

In that letter, Hall said that he had been given no further assignment by Myers and had no regular salary. Goodness countered that Hall still had health insurance and room and board at Seton Hall was covered. He also said the priest had been assured that he would eventually receive a new assignment.

“The archbishop has been very gracious,” Goodness said.

Goodness also told a local news outlet that the archdiocese now does not consider Hall’s sexual orientation a problem.

“If he remains celibate, and he maintains his ordination promises, his sexual orientation is not an impediment,” he told NJ.com.

St. Lawrence parish has staged a comeback since Superstorm Sandy devastated the church in the low-lying section of Weehawken in October 2012, battering the structure with 8-foot waves and causing $1 million in damages.

It was thought that the parish might never reopen, but Meyer, the Hoboken pastor, has overseen a renaissance at the church.