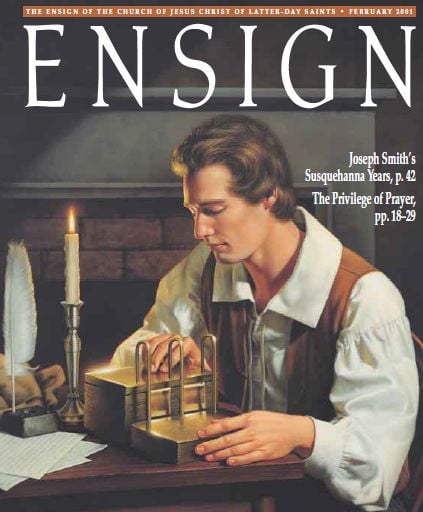 This 2001 “Ensign” cover shows Joseph Smith translating the Book of Mormon by poring over the plates — which is how many faithful Latter-day Saints have been instructed to imagine the process.

Seer stones, Urim and Thummin, golden plates: In the story of the coming forth of the Book of Mormon, all of these odd-sounding components play a part.

But most contemporary Mormons don’t spend a lot of time dwelling on the unusual logistics of the book’s translation. And it’s something the LDS Church has become transparent about only recently, releasing a Gospel Topics essay on the issue in December 2013 that conceded that:

Despite its presence on lds.org, it’s safe to say the GT essay hasn’t made a major impact. In fact, as I’ve mentioned before here on this blog, most of those (excellent) essays on various historical and theological topics have been largely ignored by members, who either don’t know about their existence or worry they’re not approved by the First Presidency. (They are.)

So if the essays have not, as yet, helped Mormons learn about their own history, then what will?

They say a picture is worth a thousand words, and the truth of that statement came home to me last night, when the media jumped on the Church’s release yesterday of a groundbreaking installment in the Joseph Smith Papers series . . . which included the first-ever public photograph to show what Smith’s seer stone actually looked like.

The AP story got picked up far and wide, even as far as the South China Morning Post.

And suddenly, Mormons up and down the Internet are asking each other: Did you know about the seer stone and the hat? If so, when did you find out?

The answer to the latter question is often South Park. 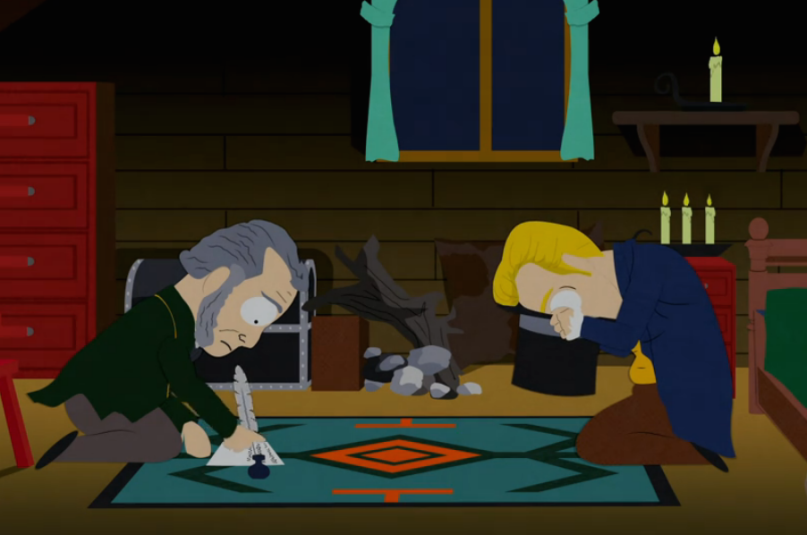 Joseph Smith translates the Book of Mormon using a hat in a 2003 “South Park” episode.

Yes, Trey Parker beat everyone to the punch. In the 2003 episode “All About Mormons,” Stan gets a crash-course introduction to LDS history from Gary, a shiny new Mormon kid in his class. Part of the episode’s flashback to Joseph Smith shows Smith translating the Book of Mormon with his face plunged earnestly in a hat.

While many Mormons dismissed the South Park explanation as anti-Mormon hogwash (a conclusion hastened by the harsh refrain of the scene’s song, which accused Mormon theology of being “dumb, dumb, dumb”), Parker’s vision of Smith pulling a translation out of hat was actually a darn sight more historically accurate than the sanitized, Church-approved images I have in my Primary binder for teaching little kids.

Those images typically show Smith translating by candlelight, poring over the golden plates. He’s sometimes depicted as being alone, sometimes with his scribe Oliver Cowdery discreetly off to the side.

But the golden plates are always front and center, with no hat anywhere in evidence.

In contrast, what the Church has been discreetly admitting in recent months is that the plates themselves were almost peripheral to the translation process, at least after the initial phases.

After the fiasco of the lost 116 pages, Smith relied on the seer stone to the exclusion of the Urim and Thummin, “with the plates apparently covered and laid aside as he worked,” as Terryl Givens put it in By the Hand of Mormon. (BTW, this 2002 book is where I first learned about the hat, though South Park certainly provided an unforgettable visual image.)

Which begs the question: Why were the plates necessary in the first place? Was their physical existence merely to persuade Smith and his early followers that something miraculous was afoot, something that could not be dismissed as the product of Smith’s own imagination?

The stark beauty of the Book of Mormon was a major reason I joined the LDS Church. 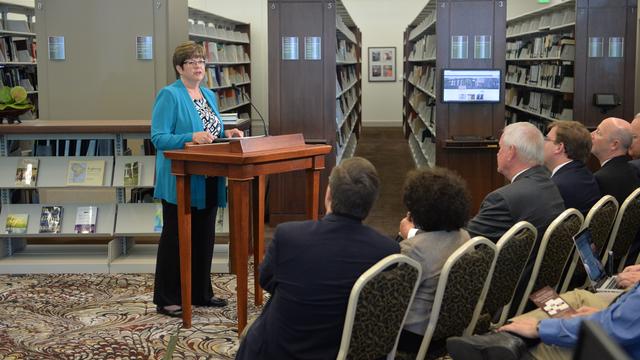 Robin Linkhart, president of the Seventy for the Community of Christ, spoke to reporters during a news conference of The Church of Jesus Christ of Latter-day Saints’ release of volume three of the Joseph Smith Papers. © 2015 Intellectual Reserve, Inc. All rights reserved.

It’s clear that the LDS Church has downplayed the less savory aspects of the story of how the book came into being, or even actively promoted a version of the history that doesn’t fit the facts. I’m glad that is changing now with this much-needed emphasis on transparency in Mormon history. So many things about yesterday’s press conference — the release of the volume, the overall trajectory of the Joseph Smith Papers Project, the unprecedented cooperation with the Community of Christ — are of good report.

I only hope such transparency isn’t too little, too late. Last night online I saw several people for whom this new-ish revelation was a “shelf-breaking” moment, which in the language of faith transitions means that it’s the last straw before they leave Mormonism for good.

On the one hand, we can say, “Seer stones? Big deal. The important thing is the scripture itself.” I’m inclined toward that POV too.

But on the other hand, for people who are already feeling anxiety and doubt, yesterday’s revelation is just one more example of how they have felt misled by the Church.

I hope the Church has a compelling answer.