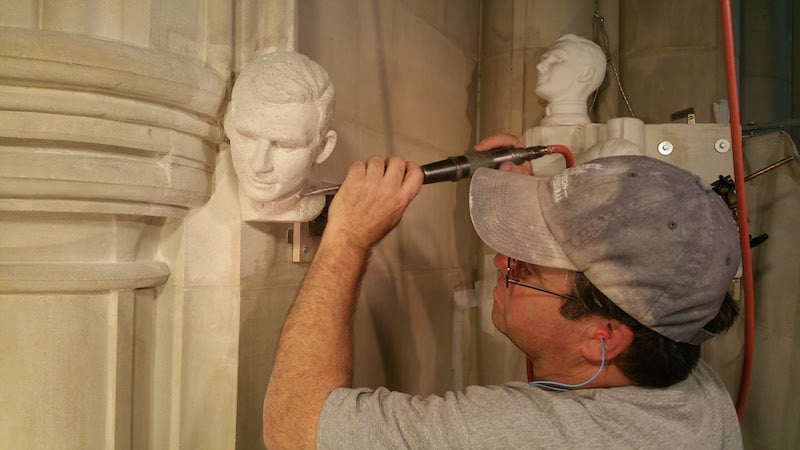 WASHINGTON — A Massachusetts seminary student who sacrificed his life for a fellow civil rights worker 50 years ago is being memorialized in limestone near the entrance of the Washington National Cathedral.

Jonathan Myrick Daniels, a lesser-known martyr in the civil rights movement, was 26 when he stepped in front of a shotgun blast meant for 17-year-old Ruby Sales in Hayneville, Ala. That selfless act, and Daniels’ brief summer of activism in Alabama, led the Episcopal Church to recognize him as a saint in 1991. An annual pilgrimage to Lowndes County is held in his honor.

Soon, an eight-inch-high likeness of Daniels will be ready for viewing by the 300,000 people from around the world who tour the National Cathedral each year. The carving, located about 11 feet off the ground at the base of an archway molding, will be part of the cathedral’s Human Rights Porch, putting Daniels in the same company as Mother Teresa and Rosa Parks.

Daniels was chosen in part because of his relative obscurity.

Daniels, originally from New Hampshire, was a student at the Episcopal Divinity School in Cambridge when he and several of his classmates answered the Rev. Martin Luther King Jr’s call for clergy to help finish the voting rights march from Selma to Montgomery in Alabama in 1965, two days after state troopers beat marchers in what became known as Bloody Sunday.

Daniels stayed for most of the summer and was with a group of activists arrested in Fort Deposit for protesting whites-only policies at local stores. After a week in jail in Hayneville, on Aug. 20, 1965, he and the others were released and walked to a nearby store where they were confronted by the gunman. Daniels pushed Sales aside, saving her life and sacrificing his own.

The white shooter, Tom Coleman, was acquitted by an all-white jury, according to the Encyclopedia of Alabama, a reference compiled by several state historical and educational institutions.

After more than three years of consideration, church and cathedral officials settled on Daniels for the third of four stone portraits overlooking the Human Rights Porch.

“Part of the idea was to have a lesser-known saint in with Mother Teresa and Rosa Parks, so it was a deliberate choice to find somebody within our own ranks that we could lift up and memorialize,” Eckstrom said. The fourth person has not been chosen.

At the cathedral, stone carver Sean Callahan has spent the last couple of weeks on scaffolding, chiseling Daniels’ image into a square stone block at the end of the molding around the arch. Callahan is working from a clay sculpture done by North Carolina artist Chas Fagan.

READ: The road from Selma was paved with the blood of four unsung martyrs

Using a three-dimensional mapping tool to measure and mark the contours of Fagan’s work, Callahan carves the limestone with a mason’s touch and an artist’s eye.

“I know a lot of Episcopalians hold (Daniels) in high esteem, which puts the pressure on to do it right,” said Callahan, 50, of Silver Spring, Md.
He plans to finish in August, and a formal dedication ceremony is planned for October. Sales is expected to attend the ceremony, Eckstrom said.

The Episcopal Diocese of Alabama will sponsor several events from Aug. 14-16 to honor Daniels and other martyrs from the civil rights movement, starting with a Friday service at St. John’s Episcopal Church in Montgomery. On the 15th, the pilgrimage will move to the Lowndes County Courthouse Square in Hayneville and include a walk from the jail to the site of the store where Daniels was shot.

Daniels’ name also is inscribed on the civil rights memorial at the Southern Poverty Law Center in Montgomery.

Faith
Episcopal men’s ministry loses board members, chapters over response to George Floyd’s death
News
Study: Biden still leads among Latino Christian voters, but Trump’s support has grown
News
Pope Francis’ new encyclical, Fratelli Tutti, enshrines familiar criticisms of racism and borders
News
Alabama officials sued over voter registration form requiring ‘so help me God’ vow
News
Alabama governor apologizes to ’63 church bombing survivor
© Copyright 2020, Religion News Service. All rights reserved. Use of and/or registration on any portion of this site constitutes acceptance of our User Agreement and Privacy Policy, Privacy Statement and Cookie Notice. The material on this site may not be reproduced, distributed, transmitted, cached or otherwise used, except with the prior written permission of Religion News Service.