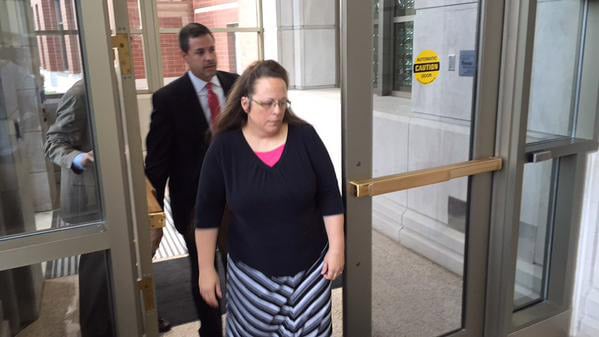 But despite a federal injunction, one same-sex couple said they had already been turned away on Thursday morning.

In a 28-page opinion, U.S. District Court Judge David Bunning found that Davis, an Apostolic Christian, has interfered with a now-fundamental right to marry by denying licenses to four couples based on her private religious beliefs.

He wrote that the state is not restricting her religious activities or asking her to condone same-sex unions when signing off on marriage forms, and her convictions have no bearing on a “purely legal” task. Bunning granted a preliminary injunction against Davis.

“She may continue to attend church twice a week, participate in Bible study and minister to female inmates at the Rowan County jail,” Bunning wrote. “She is even free to believe that marriage is a union between one man and one woman, as many Americans do. However, her religious convictions cannot excuse her from performing the duties that she took an oath to perform as Rowan County clerk.”

Roger Gannam, an attorney with the Liberty Counsel, a religious freedom organization representing Davis, said Wednesday that the group has already filed a notice of appeal and plans to request a stay on the ruling.

He argued that the opinion amounts to government coercion, forcing Davis to violate sincerely held beliefs. “It seems like the ruling said there’s a new right to same-sex marriage and it trumps all others,” he said.

When asked if Davis would begin issuing licenses, Gannam said he hopes to obtain a stay before any more are requested.

But David Moore, who is trying to marry his partner of 17 years, David Ermold, said he visited the clerk’s office early Thursday (Aug. 13), but a deputy clerk told him that the office is still not issuing the forms.

Meanwhile, Dan Canon, an attorney for the couples, called the opinion a “total victory” for his clients and the rule of law.

“It reaffirms the idea that we’ve been trying to stress all along, which is that individual elected officials are not allowed to govern according to their own private religious beliefs,” he said. “That’s just not the way we do things in America.”

Davis began refusing licenses after the U.S. Supreme Court ruled in June that all couples have a right to marry regardless of gender. In court, she argued that issuing the forms under her name would violate her religious beliefs, even if a deputy clerk performs the task in her stead.

But the American Civil Liberties Union, which sued on behalf of two same-sex couples and two opposite-sex couples, argued that Davis violated their constitutional rights. The couples said they live, work and pay taxes in Rowan County and shouldn’t have to drive elsewhere to obtain the paperwork.

Bunning agreed, writing Wednesday that the couples have strong ties to Rowan County and an understandable preference to obtain licenses there.

“For other Rowan County residents, it may be more than a preference,” he wrote. “There are individuals in this rural region of the state who simply do not have the physical, financial or practical means to travel.”

Bunning, a conservative judge who was appointed by President George W. Bush, also found that marriage forms do not constitute an endorsement: Instead, a clerk simply certifies that information is accurate and that couples are qualified to marry under state law.

Davis is among a number of clerks in Kentucky who have cited concerns over issuing licenses, and Bunning argues that siding with Davis would allow other clerks to follow her approach, in what could become a “substantial interference” in half of the state.

Canon, who is working with the ACLU, said attorneys have no plans at this time to sue clerks in other counties who are denying licenses, but anyone refused a license would have strong grounds for a suit.

(Wynn reports for the Courier-Journal in Louisville, Ky.)