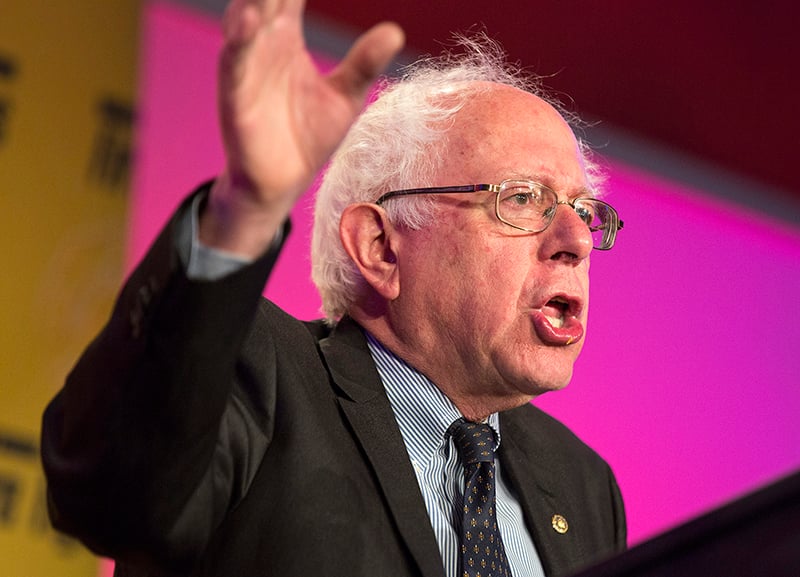 LYNCHBURG, Va. — Sen. Bernie Sanders spoke Monday (Sept. 14) at an evangelical school where he framed his fight against wealth and income inequality in terms of morality and justice.

Sanders, a Vermont independent running for the Democratic presidential nomination, conceded that many in the audience at Liberty University disagree with his support for abortion rights and gay marriage. But he suggested they might agree that, at a time when “a handful of people have wealth beyond comprehension,” other people shouldn’t have to struggle to feed their families, put a roof over their heads or visit a doctor.

“When we talk about morality and when we talk about justice, we have to, in my view, understand that there is no justice when so few have so much and so many have so little,” he said to applause from the audience of nearly 12,000.

Sanders said he chose to speak at the school, founded by the late Rev. Jerry Falwell, because it’s important to find common ground. There is no justice, he said, when the rich get richer and children go to bed hungry and low-income mothers return to work a week after delivering a baby because they can’t afford to stay home.

“It is imperative that we have the courage to stand with the poor, to stand with working people and when necessary to take on very powerful and wealthy people whose greed in my view is doing this country enormous harm,” he said to applause.

David Nasser, the school’s senior vice president for spiritual development, drew loud applause after the speech when he told Sanders on stage that, while most Christians agree it’s immoral to protect billionaires at the expense of society’s most vulnerable citizens, they would say unborn children need protection, too.

Sanders also drew applause in responding that it’s “improper” for the government to involve itself in this “painful and difficult choice” for women.

“I don’t want to be too provocative here, but very often conservatives say, ‘Get the government out of my life,'” he said. “On this very sensitive issue…my view is I respect absolutely a family that says, ‘No, we are not going to have an abortion.’ But I would hope that other people respect the very painful and difficult choice that many women feel they have to make and don’t want the government telling them what they have to do.”

Student Government Association president Quincy Thompson, 22, of Dallas, said Sanders connected with students, who were excited to hear a different perspective. Thompson, a pastoral leadership major, said Sanders’ statistics on poverty “struck a chord” with him personally. But he said churches – not the government – should address those needs.

“From today, I’m going to be more aware of the people that are in need in my community of Lynchburg,” Thompson said.

The late Rev. Falwell, a televangelist and conservative political commentator who died in 2007, founded Liberty University in 1971. It’s now the largest private, nonprofit university in the nation. Its code of conduct urges “caution” when viewing movies rated R or PG-13 and bans sexual relations outside marriage between a “natural-born” man and woman. Faculty are asked to affirm a doctrinal statement based on Christian beliefs.

The school has become a regular stop for conservative candidates. Sen. Ted Cruz, R-Texas, announced his presidential campaign there in March.

Students are generally conservative. In 2012, 93 percent of Liberty students who voted on campus supported Republican Mitt Romney, according to the school.

Liberty drew negative attention in 2009 when a school official revoked its recognition of a club for college Democrats. But school president and Falwell’s son, Jerry Falwell Jr,. called the official’s actions an “aberration.” He said during an interview last week the school now allows political clubs to meet on campus but doesn’t endorse any of them.

Liberty student Derek Atlas, 19, of New York, said he’s against abortion but is more left-leaning than his fellow students on a variety of issues. He said he’s wary of Sanders’ “socialist views” but admires him for fighting for the middle class, minorities and women rather than for big business.

“I believe Christ tells us to help the poor, feed the needy and shelter the homeless,” said Atlas. “I like how (Sanders) wages war on poverty, not poor people.”

Catherine Trevithick, 22, of Reston, Va., said she opposes abortion, “big government,” and gun control. She likes Republican candidate Donald Trump and said switching to Sanders would be “a long shot.”

“But I’m not going to be close-minded and ignore what he has to say,” she said before the speech. “College is a time to hear from people of all backgrounds and opinions.”

As a nonprofit, the school must invite all candidates who are running for a particular office. Sanders is the first of the candidates running for the Democratic nomination to accept, and his speech was mandatory for all residential undergraduate students.

Falwell said in an interview last week that he was “pleasantly surprised,” when he learned Sanders would participate. He hopes Sanders’ appearance helps reverse the impression that the school isn’t open to opposing views. The university is in the middle of a $500 million expansion and wants to advance to the NCAA Division I Football Bowl Subdivision.

“We’ve always tried to present both sides because we believe that college students are at an age where they need to hear viewpoints from all ends of the spectrum,” Falwell said. “We’re proud of our students for treating speakers that are not in line with their views with respect.”