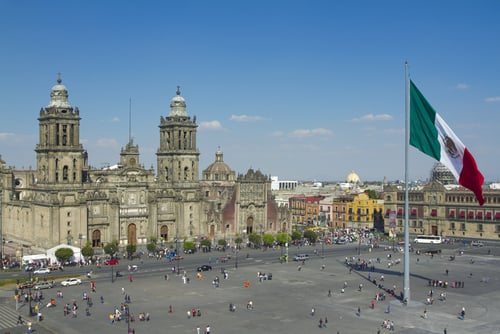 A view of the Cathedral, in the Zocalo, Mexico City.

VATICAN CITY (RNS) The Vatican said Tuesday (Oct. 6) that “concrete steps” were being taken to arrange a papal trip to Mexico, with reports Pope Francis’ visit could come in early 2016.

Mexican media, citing the Rev. Federico Lombardi, the Vatican’s chief spokesman, said Francis was scheduled to visit the country in the first few months of 2016.

But Lombardi’s deputy, the Rev. Ciro Benedettini, subsequently said the Holy See was not set to announce the visit. “It’s not an official confirmation, but concrete steps are being taken to prepare it and make it happen,” he said.

Benedettini did not detail where in Mexico the papal visit would take Francis, who earlier this year said he wanted to travel there ahead of his trip to the U.S. in September.

Francis’ intention was to show solidarity with people immigrating north of the border. In the end, he chose to fly to the U.S. via Cuba. Earlier this year, the pope helped broker a thaw in relations between the U.S. and the island nation.

The pope did, however, use a historic address to Congress to tell lawmakers they must end “hostility” toward immigrants in the U.S.

During his U.S. visit, 5-year-old Sophie Cruz, the child of undocumented immigrants from Mexico, drew attention to the issue. Jumping a security barrier, she rushed toward Francis atop the popemobile and delivered a letter asking for his help.

The pope has repeatedly spoken of his immigrant heritage; his parents emigrated from Italy to Argentina, and he has used his papal trips to bring attention to those on the margins.

Francis is scheduled to visit Krakow, Poland, for World Youth Day next July. Despite speculation about a visit to Argentina since becoming pontiff, the Vatican is yet to confirm further foreign trips during 2016.