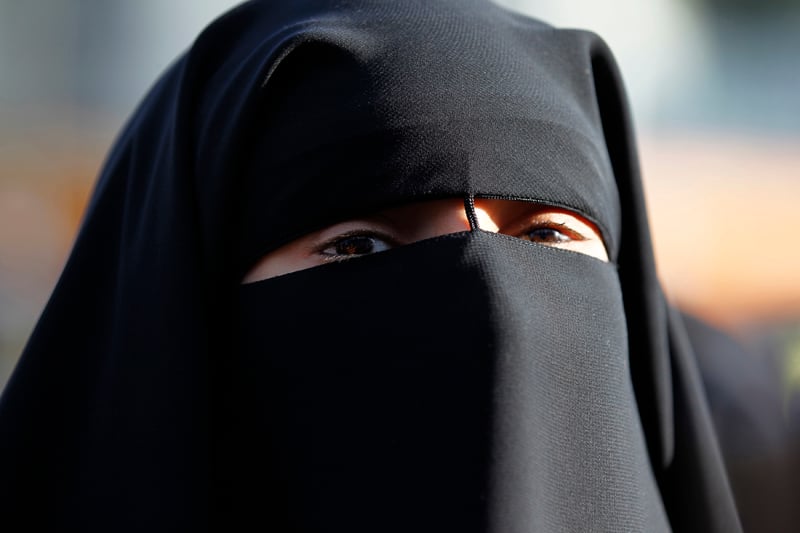 Hind Ahmas wears a niqab despite a nationwide ban on the Islamic face veil outside the courts where she arrived with the intention to pay a fine after she was arrested last May for wearing the niqab in public, in Meaux, east of Paris, on Sept. 22, 2011. Photo courtesy of REUTERS/Charles Platiau
*Editors: This photo may only be republished with RNS-FRANCE-NIQAB, originally transmitted on Oct. 20, 2015.

PARIS (RNS) The fifth anniversary this month of France’s law banning the full-face veil in public has gone almost unnoticed here, as have the few niqabs that Muslim women can occasionally be seen wearing on the streets of Paris, Lyon or Marseille.

Once so popular that Parliament passed it with almost unanimous support, the ban hardly figures anymore in the recurrent debates about the place of the 5 million-strong Muslim community in a country that limits the role of religion in the public sphere.

The gradual transformation of the niqab issue from a national debate to little more than a footnote speaks volumes about French politics. Legislators are good at passing laws but not always effective in having them enforced.

The ban on niqabs, which were seen as a symbol of a spread of radical Islamism, has not stopped some Muslim women from wearing them as a badge of defiance toward a society they say does not accept them.

“This is my way of saying ‘no’ to a government that has robbed me of my freedom,” a veiled woman named Leila, who admitted to not being a regularly practicing Muslim before the law was passed, told the Paris daily Le Monde.

The ban was widely criticized in the Muslim world and there is anecdotal evidence that militant Muslims — both from abroad and French recruits to groups such as the Islamic State — see it as one reason to put France high on their hit list.

Sociologist Agnès de Féo, who has studied the issue for a decade, said veiled women before 2010 were mostly pious traditionalists, but now many are converts to Islam who feel empowered by embracing a radical Islam the law was meant to combat.

“We have created the monster we wanted to avoid,” she concluded about the ban, which then-President Nicolas Sarkozy signed into law in October 2010.

It’s probably not surprising, then, that the large majority of politicians who supported the ban five years ago don’t talk much about it now. They still debate how to react to Muslim practices they think don’t fit into French society, but their attention has moved on to other issues.

The movement for the ban arose in 2009 when some mayors reported that a few Muslim women had shown up in niqabs to be married at the local town hall. They considered this a violation of laïcité, which for many French is a central pillar of society. The term, translated as “secularism” or “separation of church and state,” also implies the neutralization of religion in the public sphere, if not its banishment altogether.

Opinion polls showed that at least two-thirds of French citizens supported a ban on the niqab, which only about 2,000 women were believed to wear, and the all-covering burqa that the French saw only in photographs from Afghanistan.

After months of debate about how a ban would protect women against radical preachers and strict men who pressure them to cover up, a bill outlawing “concealment of the face in public” breezed through the National Assembly by 335-1 votes and the Senate by 246-1. The fine for wearing a niqab in public was set at 150 euros.

Questions quickly arose about whether the ban could be effective.

“We have other, much more important tasks than — excuse me for saying this — to go ‘burqa-chasing,’” said one official of a police trade union.

In poorer areas with large Muslim populations, police also found it difficult to issue fines to violators on the spot. When officers asked a fully veiled woman for her identity card in 2013 in Trappes, a Paris suburb known as the home of a small but radical Muslim group, there were three days of rioting, including an assault on the local police station.

Niqabs, presumably worn by visiting tourists from the Persian Gulf states, can be seen occasionally at tourist spots in Paris such as the Eiffel Tower or the Champs Elysées.

That didn’t help a Gulf couple last year that had to leave the Opera Bastille during a performance of Verdi’s La Traviata because the actors, after spotting the woman in the front row, threatened to stop the performance if she didn’t take off the veil or leave.

But few veiled tourists have suffered that kind of treatment. Instead, police are handing out fines at a low but regular rate, mostly in poorer neighborhoods, and the trends that emerge seem to bear out the conclusion that sociologist de Féo came to.

The ministry said many women stopped by police were repeat offenders, and one had been fined 33 times. Most were under 30 and born in France.

Rachid Nekkaz, a French-Algerian businessman who has pledged to pay the fees for any women fined for wearing a niqab, said he had paid 973 tickets for 683 women by early October. He has also paid 251 such fines in Belgium and two in the Netherlands.

Nekkaz, who says he is “against wearing the veil in Europe” but thinks women have a right to do so, estimated that two-thirds of the women he has helped were French converts to Islam. Only 118 of the women fined stopped wearing the full veil, he said, while 213 of those fined had begun wearing the niqab after the law was passed.

The anti-niqab law has hardly lived up to the expectations its supporters aroused, but that hasn’t discredited the idea of coming up with new rules to try to enforce more conformity to the French way of life.

Presidential and parliamentary elections are scheduled for 2017, and the far-right National Front has become a strong challenger to Sarkozy’s conservative Republicans party and President François Hollande’s Socialists.

Over the past year, some politicians have begun asking whether the long skirts some Muslim girls wear can be considered religious clothing that has no place in school. Others say public school cafeterias should scrap the vegetarian meal option for Muslim and Jewish pupils who don’t eat pork or other meat not religiously slaughtered.