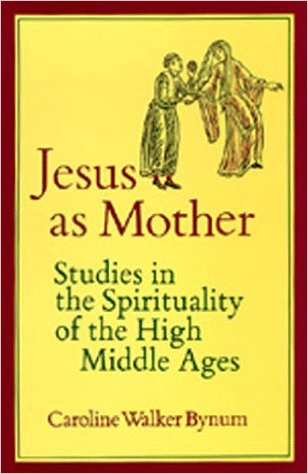 The seminal analysis the medieval use of female language for Jesus

While I wouldn't want to argue that my co-religionist Sarah Silverman is a learned theologian, her tweet about Jesus being "gender fluid" has some pretty good precedents in Christian thought. Now, Bill Donohue, I know this may make your head explode, but some very orthodox Christians in the Middle Ages liked to describe Jesus in feminine terms.

Here, for example, are the words of a 14th-century monk named Farne:

...little ones…run and throw themselves into their mothers’ arms…Christ our Lord does the same with us. He stretches out his hands to embrace us, bows down his head to kiss us, and opens his side to give us suck; and though it is blood he offers us to suck and we believe that it is health-giving and sweeter than honey and the honey-comb [Psalm 18:11]. Do not wean me, good Jesus from the breasts of thy consolation [Isaiah 66:11]

And then there's the famous English anchoress Julian of Norwich, who wrote, "Jesus Christ therefore, who himself overcame evil with good, is our true Mother. We received our ‘Being’ from Him ­ and this is where His Maternity starts ­ And with it comes the gentle Protection and Guard of Love which will never ceases to surround us."

Of course, it can be argued that such language is "merely" metaphorical. And indeed, medieval writers were not suggesting that Jesus of Galilee was anything but a physical male.

But beginning in the 12th century, Western Christians conceived of Jesus in increasingly human terms -- as a person whose footsteps needed to be followed, whose sufferings could be taken on. And as a nurturer who functioned in a maternal way towards his devotees. This point, made by the great medieval historian Caroline Walker Bynum  three decades ago in a collection of articles titled Jesus as Mother, is uncontested by scholars these days.

Jesus is not simply a person who lived once upon a time. For Christians, he remains a living member of the Trinity. And in the same way that a physical male -- one of the characters in the movie Tangerine, say -- can manifest himself as a woman, so it's clear that, for some Christians over the centuries, Jesus has manifested in feminine terms.

In other words, Silverman's intuition is correct.