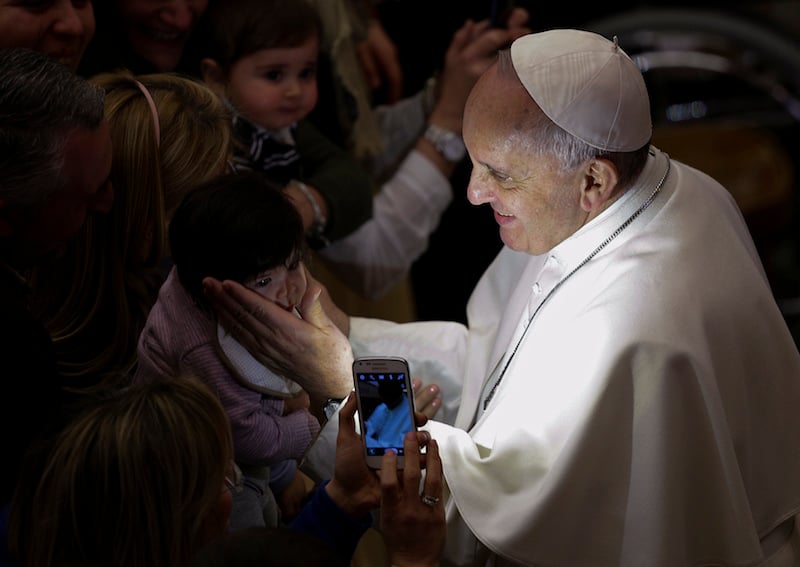 Pope Francis blesses a child as he leads a special audience for members of an Italian Catholic association of teachers, school managers, educators and trainers at the Vatican on March 14, 2015. REUTERS/Max Rossi *Editors: This photo may only be republished with RNS-POPE-COLDCALL, originally transmitted on Dec. 29, 2015.

(RNS) Part of the appeal and notoriety that Pope Francis gained during the first two years of his pontificate came from his penchant for using his cellphone to call people out of the blue, from a struggling single mother to his cobbler back in Argentina to an ostracized bishop, and even the odd journalist.

Yet for a while it seemed the “cold-call” pope had gone into hibernation.

Now, a letter from an Italian boy who wrote the pope because he was worried about his ailing aunt has prompted another surprise papal phone call a few days before Christmas. As it turned out, the boy wasn’t home at the time, so Francis chatted with his mother for 15 minutes, assuring her of his prayers for the aunt.

“It was the most beautiful Christmas present that we have received in this difficult moment,” said the parents, who declined to be identified.

Instead, they told the priest of their parish in Calabria, in southern Italy, who relayed the news of the pope’s call at Mass on Christmas Eve and then posted it on the Facebook page of St. Nicholas of Bari in the town of Mendicino.

(And yes, the parish is named after that St. Nick, who today is probably more familiar as the jolly old elf who pops down the chimney around this time of year with a sack full of gifts.)

READ: Pope Francis, the ‘cold-call pope,’ reaches out and touches a lot of people

As often happens when the pope calls unexpectedly, there were a few awkward moments at first as the mother apparently tried to figure out whether this was real or a prank.

But soon Francis and the mother were chatting with “great familiarity” and “asking about them as though he were one of the family,” said the Rev. Enzo Gabrieli, the parish priest.

“Oftentimes we’re in a hurry when we call others. But they felt the pope was truly interested in them,” Gabrieli told the Catholic news site Aleteia, which also reported that the boy is 7. “At that moment, they were at the center of his attention. This is what really struck them. He was asking about them; they felt he really wanted to know how they were doing.

“The pope continues to surprise us with his simplicity and closeness,” the pastor said. “The great kindness of the family was to want to share the news with the community. The Calabrese people share their joys and sorrows with one another. They live in community as a family. Even though they wished to remain anonymous, they wanted to share with the community the joy of the gift they received.”

There was no further word on the condition of the aunt, and as is usually the case with these personal exchanges, the Vatican did not issue any statement about the phone call.