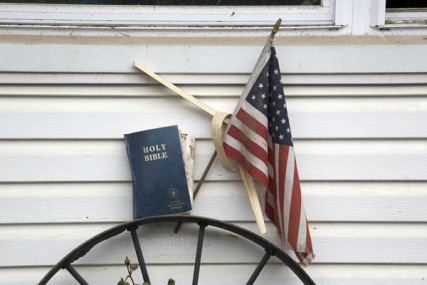 (RNS10-jan15) Flag and Bible in front of a home impacted by Hurricane Sandy on Staten Island, NY. Recovery work is being done by Volunteers in Mission through the New York Annual Conference, United Methodist Church. For use with RNS-UMC-SANDY, transmitted on January 15, 2013, RNS photo by Arthur McClanahan/Iowa Annual United Methodist Conference.

Every election cycle an elaborate courtship ritual goes on between political candidates and clergy. Watch for it in 2016.

Clergy seek out major candidates to…help validate the clergyperson as a big-time leader; offer advice to candidates; pray with them; endorse or quasi-endorse them; get pictures taken with them.

It is an interesting question to ask, as James Davison Hunter did in his groundbreaking 1991 book, Culture Wars, who is using whom? Who is gaining more from these transactions, the candidates or the clergy?

And the rest of us should ask: is this good for our politics? Is it good for our religion? Are there any boundaries here?

I’ll admit it. I’m a clergyman who has been courted by a candidate. Barack Obama courted me in 2007-2008. He wrote me what appeared to be a personal letter. I later responded favorably to invitations from his religious outreach team. They invited me to the 2008 Democratic Convention. I spoke on a panel there.

After the election, I remember getting invited to a briefing at the transition office in Washington. There I spotted the economic team in a meeting: Tim Geithner, Larry Summers, the whole gang. It was cool to be, or to feel, this close to the incoming president of the United States. Proximity to power is intoxicating, so much so that even the illusion of proximity is attractive.

I thought I might occasionally be asked for advice on an issue at the intersection of faith and policy. It never really happened. After awhile the conference call notices and email communications and occasional Christmas party invitations meant little to me. I realized I was on some fifth-circle-of-influence list but that was about it. I was an object of communication and mobilization, not a participant in any kind of advising, spiritual or otherwise.

I am quite confident that the same process is happening now in most of the presidential campaigns. Of course, it is especially visible on the Republican side, because the many candidates are trying to capture the fundamentalist and evangelical vote in Iowa and beyond. The well-organized candidates undoubtedly have put someone on the religious outreach beat. These staffers are working the phones, convening the meetings, trying to beat the bushes for clergy support.

The bigger the clergy fish, the more attention they are getting from candidate staff and maybe the candidate himself or herself.  They are enjoying the attention and dreaming of the influence they will one day have on the president of the United States. The more ambitious and partisan are the courted clergy, the more likely they are to blow right past any prudent, or even legal, boundaries between church and state. All of it can be justified in the name of God, Jesus, and the good of the country. After all, so much is at stake in this election. (We say this every four years.)

There really ought to be some boundaries for this clergy/candidate mating dance. Some are legal; others have to do with protecting the integrity of both our politics and our religious communities. Here is my list. Call me a purist:

–Clergy should not endorse political candidates, from a pulpit or anywhere else.

–Clergy should not push out essentially partisan voter guides through their churches.

–Clergy should not offer strategic advice to candidates related to how to win a religious constituency.

–Clergy should not calibrate their preaching in order to influence the outcome of an election.

–Clergy should not invite political candidates to speak in their churches unless they invite all major candidates for a particular office.

–Clergy should not use their churches as a base of operations for partisan voter registration campaigns.

–Clergy should not identify the victory of their preferred candidate as God’s will.

Our nation is already divided enough. We really don’t need competing groups of clergy telling us how God would vote in 2016.