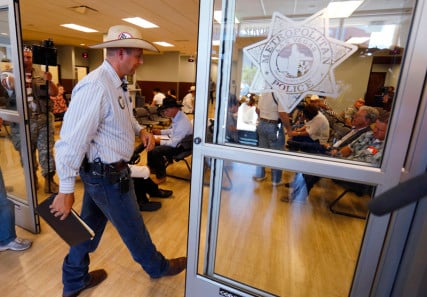 Ammon Bundy, son of rancher Cliven Bundy, files a criminal complaint against the Bureau of Land Management at the Las Vegas Metropolitan Police Department in Las Vegas, Nevada on May 2, 2014. Photo courtesy of REUTERS/Mike Blake

2:54 p.m.: See the end of this post for an update about a statement just issued by the Church of Jesus Christ of Latter-day Saints.

Over the weekend, a small group of militiamen claiming to defend the United States Constitution broke into a federal wildlife refuge in eastern Oregon.

They’re saying they’re planning to occupy it indefinitely – “for years,” according to leader Ammon Bundy.

And they’re encouraging their friends to come along for the occupation, with guns in tow.

You may remember the Bundy name from two years ago, when Ammon’s father Cliven Bundy got into a much-publicized standoff with the federal government over his refusal to pay hundreds of thousands of dollars that he owed in grazing fees that went unpaid for more than twenty years.

Now Ammon Bundy is publicly taking up the cause of anti-government by traveling to Oregon to defend the Hammond family, a father and son who have been convicted of setting fire to public lands.

The Hammonds are scheduled to begin their five-year sentences today, but the protesters want the sheriff to offer them sanctuary instead of serving their time.

The protesters occupying the wildlife refuge so far number only about twenty, according to OPB, prompting one who identified himself as “Captain Moroni” to criticize his fellow insurgents as unfaithful to the cause he’s ready to die for.

“I feel quite betrayed” by the small numbers, he said, noting that “everyone just craps out” on follow-through even when they identify with the movement.

What’s particularly fascinating to me is the way this self-styled “Captain Moroni” has appropriated Book of Mormon history for new (and unworthy) ends.

People are drawn to the historical Captain Moroni because he’s the military studmuffin of the Book of Mormon; the character is brash and decisive, even “angry” (Alma 44:17, 59:13). He gets the job done. He sees himself as a Nephite patriot who loves God and country and gets rid of interlopers.

But he’s also, on at least one occasion, flat-out wrong, and that lesson should be a cautionary tale here.

There’s a telling scene in the Book of Mormon when Captain Moroni writes to Pahoran, the chief judge who’s responsible for keeping the military well-stocked. (See here for a longer post about what this passage teaches about the perils of anger.)

In the story, Captain Moroni has just about had it with the government, which has effectively “crapped out” on him and gone AWOL. In his case, the anger arises because the government hasn’t done enough, while in the Bundy case, it’s because the government has allegedly interfered too much. Still the result is the same: the good captain offers a veiled threat that the next time he’s in town he’s going to bring some armed ragamuffins along with him to make his point more forcefully (Alma 60:25–27; 30).

Stupid damned government, not caring a whit about the people. Stupid government agents, sitting on their thrones and grasping for power (Alma 60:11, 18).

I won’t give away the rest of the story, but it turns out that Captain Moroni is 100% wrong about Pahoran, who is in fact a righteous representative of a decent government with the people’s best interests at heart. Whoops.

So here is what I wish. I wish that the Bundy family and the self-proclaimed “Captain Moronis” of Mormondom would take a closer look at what they are doing. Do they really imagine that God is on their side, inspiring them to cheat on their taxes and set fire to government land?

I want to be clear: There is definitely a time and a place for Mormons to ignore the general rule as stated in our Articles of Faith that we are to obey the governments that rule the nations where we live.

For example, last year I posted about new research about Mormon Nazis in the 1930s and 40s who wholeheartedly embraced Hitler’s program. A tiny handful of Mormons stood up to Hitler in Germany at that time, and later they all explained their acquiescence by quoting that Article of Faith. What might have changed if they had stood up to injustice?

So, yes there are times and places in history when Latter-day Saints have a moral duty to oppose oppressive regimes. However, this is not one of those times.

A government that says whenever they graze their cattle on lands legally owned by the government, they should pay a fee for that.

Or that people should not set fire to federal lands.

Or that they should honorably serve their prison sentences when they’ve been convicted in a court of law.

It’s a blight on the Mormon faith that some of the armed militia men taking over a federal building are LDS. This is a place where innocent people go to birdwatch, for crying out loud.

Moreover, they have caused the whole county to cancel school this week because people are afraid to send their children to school when armed strangers have set up shop in town.

Enough with this crazy and illegal behavior – and with pretending that it is sanctioned by God.

2:54 p.m. update: The LDS Church issued the following brief statement today, condemning the actions of the militia organizers: “While the disagreement occurring in Oregon about the use of federal lands is not a Church matter, Church leaders strongly condemn the armed seizure of the facility and are deeply troubled by the reports that those who have seized the facility suggest that they are doing so based on scriptural principles. This armed occupation can in no way be justified on a scriptural basis. We are privileged to live in a nation where conflicts with government or private groups can – and should – be settled using peaceful means, according to the laws of the land.”