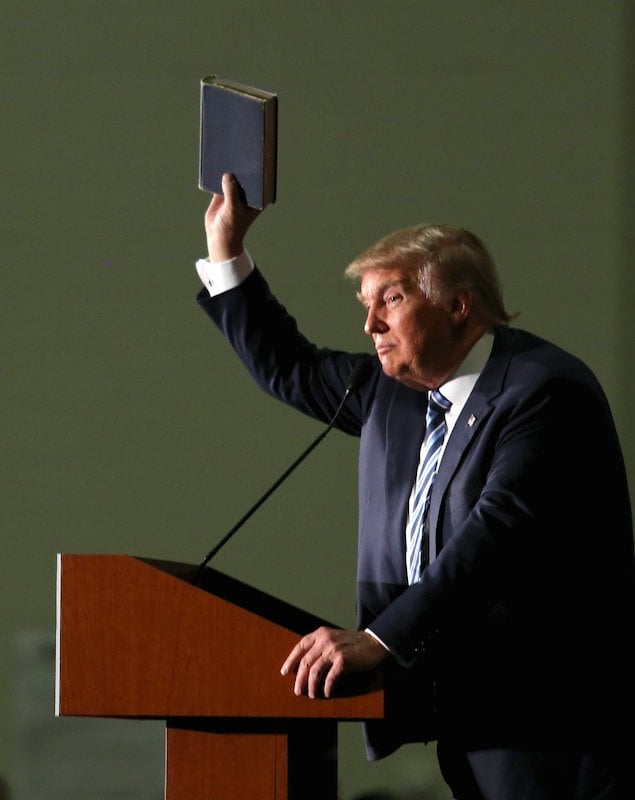 U.S. Republican presidential candidate Donald Trump holds up a copy of the Bible he said his mother gave him as a youth during a campaign rally in Council Bluffs, Iowa, on December 29, 2015. Photo courtesy of REUTERS/Lane Hickenbottom *Editors: This photo may only be republished with RNS-TRUMP-LIBERTY, originally transmitted on Jan. 5, 2016.

(RNS) Donald Trump is expected to speak later this month at evangelical bastion Liberty University, an appearance that could provide the Republican presidential front-runner another chance to bolster his already strong showing with conservative Christians.

The Jan. 18 talk to students and faculty at the Lynchburg, Va., campus will take place just two weeks before the Iowa caucuses, the first contest of the GOP presidential primary season and one in which evangelicals will play a key role.

Trump and Liberty’s president, Jerry Falwell Jr., have been in “close contact” during the campaign, according to the News & Advance newspaper, which first reported Trump’s appearance. Falwell’s father, the late Jerry Falwell Sr., founded the Moral Majority a generation ago and helped launch the religious right movement.

Falwell, a Baptist, has listed Trump as one of his top three favorite candidates, along with Ben Carson and Texas Sen. Ted Cruz.

“I think Trump reminds me so much of my father,” Jerry Falwell said during a television appearance in December. “He says exactly what he thinks no matter what anybody cares.”

In addition, Jerry and Becki Falwell’s son, Wesley, was married last October at the Trump Winery in Charlottesville, Va., where Trump’s son Eric is president of the vineyard, Becki Falwell told the paper.

The talk at the university convocation will be Trump’s second appearance at what has been called “the Protestant Notre Dame.”

Trump, who identifies as a Presbyterian, spoke at a convocation in September 2012 along with former GOP presidential candidate Michele Bachmann.

This time, however, Trump is a candidate and is leading the Republican field with an unconventional, populist campaign fueled by blustery rhetoric that taps a deep well of voter anger. Trump’s success has stunned pundits and the GOP establishment, as well as many conservative Christian leaders who would prefer a more conventional candidate, such as Florida Sen. Marco Rubio.

Some prominent evangelicals are favoring Trump, too, or at least giving him a sympathetic ear despite Trump’s three marriages and track record of what many consider boorish behavior and ugly talk about immigrants, Muslims and women.

Falwell was especially pleased when Trump called him last month to say he was proud of Falwell for asking Liberty students to carry guns on campus in order to combat Islamic terrorists and to show opposition to President Obama’s appeal for greater gun control.

Falwell also agreed to Trump’s demand to appear solo at Liberty this month rather than as part of a debate with the entire Republican field.

(Falwell has invited candidates with whom he has little in common to speak at the university’s convocation; in September, Democratic contender Bernie Sanders, the Vermont senator who calls himself a “democratic socialist,” was well-received when he addressed the student body.)

Besides Falwell, Franklin Graham, son of the legendary evangelist Billy Graham, has voiced admiration for Trump, and Tony Perkins, head of the Family Research Council, hosted Trump for a friendly interview last month in which Trump spoke about how important his faith was to his life and his candidacy.