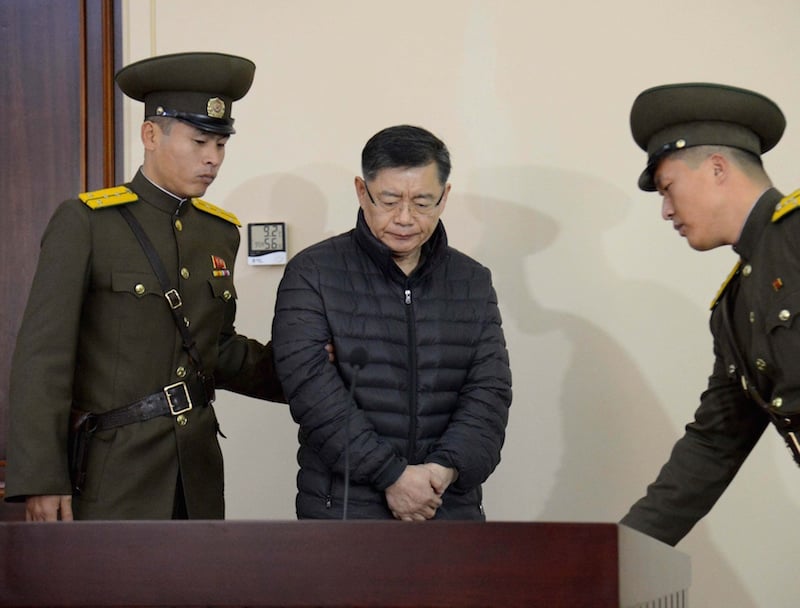 WASHINGTON (RNS) With North Korea leading the way and Islamic extremism rapidly expanding, 2015 was the “worst year in modern history for Christian persecution,” according to a group tracking this issue.

Iraq is in second place on Open Doors‘ 2016 World Watch List, a ranking of the top 50 most dangerous places in the world to be a Christian.

It’s the first of 35 countries on the list where Islamic extremism “has risen to a level akin to ethnic cleansing,” said the report, released Wednesday (Jan. 13). 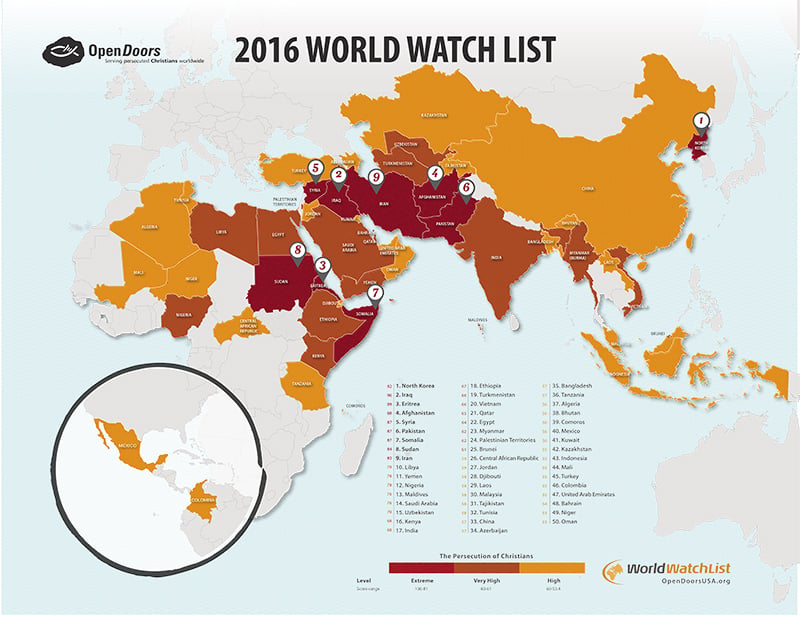 The nonprofit organization Open Doors has focused on concern for persecuted Christians since 1955. On its map, the top 10 are highlighted in blood red to indicate “extreme” persecution:

Saudi Arabia, which recently executed a Shiite cleric and where bloggers have been sentenced to lashings for suggesting changes in the practice of Islam, came in at No. 14. 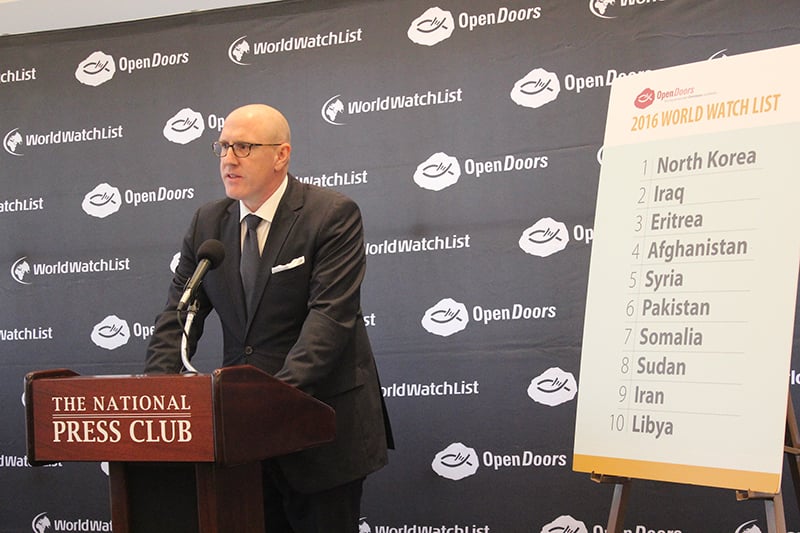 More than 7,100 Christians were killed for faith-related reasons, and 2,400 churches were destroyed or damaged, said Open Doors President David Curry.

Curry gave a world tour of murder, exile, terror, detention and destruction at a press conference introducing the new report. The militant groups Boko Haram and al-Shabab, he added, are the “sinister” power behind persecution in four African countries.

“The level of exclusion, discrimination and violence against Christians is unprecedented, spreading and intensifying,” said Curry.

It’s vital to track such persecution, not only on behalf of its victims, but to recognize growing threats to global peace and security, Curry said. “The persecution of Christians is a lead indicator of when countries are beginning to tip into chaos.”

“In far too many countries far too many people face daunting, alarming restrictions “ on living and practicing their religion and yet, Saperstein said, most “refuse to surrender their faith or their God.”

“Every one of the numbers in this report is a human being,” the ambassador said, as he stood at the podium directly in front of Gladys Juma, whose husband was murdered in Kenya. Juma detailed a heartbreaking night of searching for her husband, Benjamin, who had gone with a pastor to “share the word of Christ” in a nearby Muslim area.

Hours after the two men went missing, Gladys Juma went to a hospital nearby, where she was shown a gunnysack of hacked and burned body parts and a seared skull sitting in a burned tire rim. No one could say who they were. A few hours later, she learned that those unidentifiable victims were, in fact, her husband and the pastor.

“It hit us very hard,” Juma said. “In Mombasa, we had had religious tolerance for many years and suddenly the tables had turned with no warning. We are still healing.”

That healing, for herself and her four children, relies on forgiveness, on trust in God and in her belief, she said, that America will act “to make sure people respect other people’s faith.”

Religion Hub
Officials: Landslide at Shiite shrine in Iraq kills 8
Follow us on Facebook!
Submit your photos to RNS