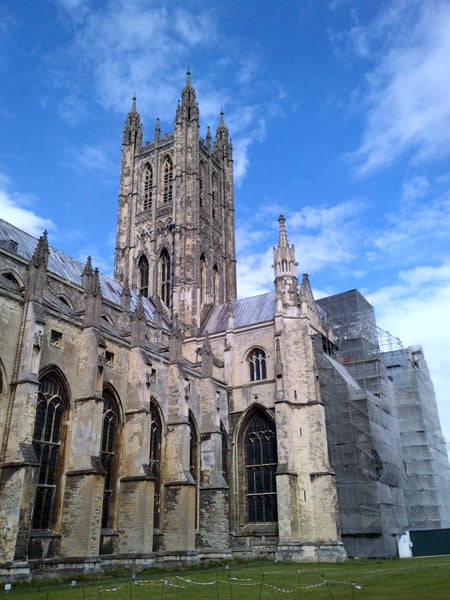 (RNS) The Anglican Communion voted to censure its American branch, the Episcopal Church, during a meeting in Canterbury, England, called to reflect on the future of the communion.

The vote Thursday (Jan. 14) to suspend the Episcopal Church from voting and decision-making for a period of three years was leaked a day ahead of a press conference that had been scheduled for Friday.

Details of the suspension were first reported by Anglican Ink, a Connecticut-based publication that said they came from a leaked communique. The vote passed by a two-thirds margin, the publication said, and included prominent voices among African bishops who have loudly condemned the American church for its liberal stance on gays.

The dramatic demotion follows a string of Episcopal Church decisions stretching back to 2003, when it elected Gene Robinson, an openly gay man, as a bishop of New Hampshire. That decision led dozens of U.S. churches to break away from the Episcopal Church and declare their allegiance to a series of rival groups, including the Anglican Church in North America.

In July, the Episcopal Church voted to allow its clergy to perform same-sex marriages, a move not taken by the majority of churches in the Anglican Communion.

“Given the seriousness of these matters we formally acknowledge this distance by requiring that for a period of three years The Episcopal Church no longer represent us on ecumenical and interfaith bodies … ,” a statement issued by the Anglican Communion reads. “They will not take part in decision making on any issues pertaining to doctrine or polity.”

“The traditional doctrine of the church in view of the teaching of Scripture, upholds marriage as between a man and a woman in faithful, lifelong union,” the statement also notes. “The majority of those gathered reaffirm this teaching.”

The Anglican Communion consists of 44 member churches from around the world, representing about 85 million Christians.

The Episcopal Church, the predominant church of many of the 13 original Colonies, has had a disproportionate influence on public life in the United States. The majority of U.S. presidents have been Episcopalians and its influence still far surpasses its 1.8 million U.S. members, who now find themselves without a voice in Anglican Communion decisions.

The three-year term of the suspension is the amount of time until the next denomination-wide meeting of the Episcopal Church, when it will vote on a response, though other church groups could respond sooner.

The suspension comes after four days of discussions among church leaders — “primates,” in church parlance — over the Episcopal Church’s position on gay marriage in relation to the position of the broader Anglican Communion. The meetings apparently got testy; British Christian media reported that the archbishop of Uganda, among the most conservative of Anglican branches, walked out amid disagreements.

Jeffrey Walton, the Anglican program director at the Institute on Religion and Democracy in Washington, D.C., said the suspension of the Episcopal Church is significant but does not, at this point, represent a schism, or irreparable rupture, within the Anglican Communion.

Other Anglican experts were mystified at the Anglican Communion’s statement, which consisted of eight brief points.

“This is not how Anglicans should behave,” said Christina Rees, a member of the General Synod, the governing body of the Church of England. “It’s awful. It’s a terrible outcome to the meeting of the primates in Canterbury. What action will now be taken against all those churches in the Anglican Communion who treat gay men and women as criminals? Will they be suspended for three years, too?”

Jim Naughton, former canon for the Diocese of Washington and now a communications consultant specializing in the Episcopal Church, called the sanctions a “weird” attempt by the primates to take power away from elected bodies and claim it for themselves.

But Naughton expects no impact in the life of the Episcopal Church.

“We can accept these actions with grace and humility but the Episcopal Church is not going back,” Naughton said. “We can’t repent what is not sin.”

Bishop Ian Douglas of the Episcopal Church in Connecticut wondered whether the Anglican primates wanted the Episcopal Church to repent for its position on same-sex marriage. “Or were they asking for an apology for how the (church’s governing body) went about opening all the roles and rites of the church, including marriage, to lesbian, gay, bisexual and transgender Episcopalians?”

Kevin Eckstrom, director of communications for Washington National Cathedral, the seat of newly installed Presiding Episcopal Bishop Michael Curry, said that while this suspension will be greeted by sadness in the Episcopal Church, it has been on a parallel track with the Anglican Communion for a while.

“It is not unlike a couple who are having marital problems and are sleeping in separate bedrooms,” he said. “Maybe now they are going to formalize the separation.”

Curry told Episcopal News Service the sanction would be painful for many in the Episcopal Church to receive. “Many of us have committed ourselves and our church to being ‘a house of prayer for all people,’ as the Bible says, when all are truly welcome,” Curry said.

Communion leaders also reportedly wanted to censure the Anglican Church of Canada, but because it has not yet adopted same-sex marriage rites, no action was taken.

The Lambeth Palace press office, home of the archbishop of Canterbury, did not respond to requests for comment about the vote, which was leaked to the media.