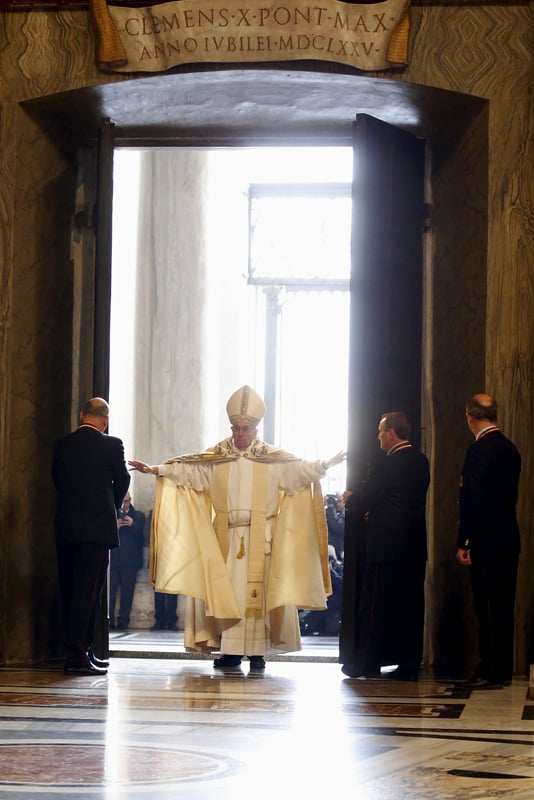 Pope Francis opens the Holy Door to mark opening of the Catholic Holy Year, or Jubilee, in St. Peter’s basilica, at the Vatican, on December 8 ,2015. Photo courtesy of REUTERS/Alessandro Bianchi *Editors: This photo may only be republished with RNS-POPE-INDULGENCES, orginally transmitted on Jan. 15, 2016.

(RNS) Pope Francis has fascinated the public in large part because of how willingly he upends long-standing traditions and promotes a “revolution of tenderness” to set the Catholic Church on a new, more pastoral course for a new, more merciful era.

To help fulfill this vision, Francis is also relying on an old-fashioned ritual — indulgences. They are a way of winning remission from penance — in this life or in Purgatory.

The most recent example of the pope’s penchant for indulgences was his announcement of a special holy year, or jubilee, dedicated to the theme of mercy and featuring a variety of ways for pilgrims to receive indulgences.

But indulgences have a rather notorious past. In the 15th century, they were sold throughout Europe to generate income for the church and, most consequentially, by Renaissance popes to help fund the rebuilding of a grander St. Peter’s Basilica.

The exploitation of indulgences by medieval clerics who trafficked in them as a way to gain money infuriated reformers and sparked the rise of Protestantism.

“As soon as a coin in the coffer rings, the soul from purgatory springs” ran a well-known couplet attributed to Johann Tetzel, a German friar whose unexcelled salesmanship in indulgences scandalized Martin Luther, among others.

In one of his 95 denunciations of Rome, Luther himself wrote: “Those who believe that they can be certain of their salvation because they have indulgence letters will be eternally damned, together with their teachers.”

And given next year’s anniversary of the Reformation — marked from the day in October 1517 when Martin Luther nailed his critiques on the door of a German church — “the emphasis on indulgences this year does clang a bit,” said Christopher Bellitto, a church historian at Kean University who specializes in the Middle Ages.

“Surely some believe indulgences are best left to the proverbial dustbin of history. They definitely have taken the church into some sordid chapters,” he added.

RELATED STORY: The ‘Splainer: What’s that Jubilee Year of Mercy the pope keeps talking about?

So what is an indulgence?

Explaining it is not a simple feat, and Vatican officials have been known to grow testy when asked. 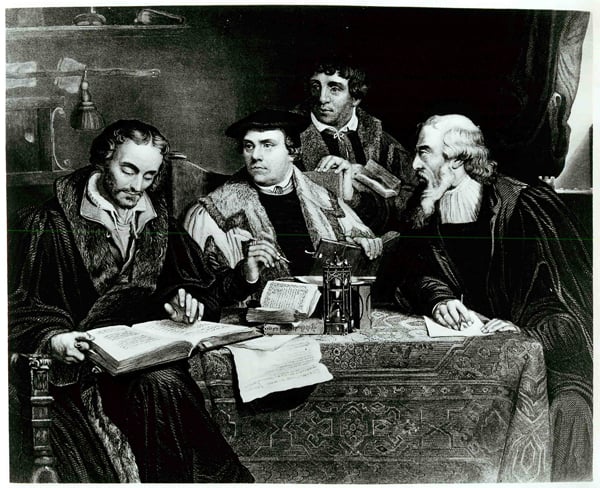 Reformer Martin Luther (center) works closely with several colleagues in translating the first German-language edition of the Bible. The edition appeared in 1532, 15 years after Luther’s challenge to the practice of selling indulgences led to the Protestant Reformation. At right are Johann Burgenhagen (standing), a pastor, and Caspar Cruciger, who edited many of Luther’s writings. Engraving by J.C. Buttre. Religion News Service file photo

As briefly as possible, it is an “extra-sacramental” means by which a penitent can perform a duty — a pilgrimage or some similar act — to eliminate all or part of the penance they must complete after confessing a sin. An indulgence can also reduce the time spent in Purgatory after one dies, or reduce it for someone else who is already in Purgatory awaiting final entry into heaven.

There are both full (plenary) and partial indulgences, and the means for obtaining them can vary. (See Section 1471 of the Catechism of the Catholic Church.)

After the outbreak of the Reformation, the Council of Trent doubled-down on the doctrine on indulgences (while trying to eliminate abuses).

Still, the whole concept of indulgences continued to bother and even embarrass some church leaders, and at the Second Vatican Council, which gathered all the world’s bishops for four years in the 1960s to update the church, a few pushed to abolish indulgences. But Pope Paul VI in 1967 reaffirmed the doctrine, and his tradition-minded successors, St. John Paul II and Pope Emeritus Benedict XVI, also promoted indulgences.

Now we have Francis continuing the practice, despite his reputation as an iconoclast. But in fact Francis has always valued popular devotions, often more than what he dismisses as the arid theological arguments of church intellectuals. Pope Francis delivers a speech during the Catholic Church’s World Day of Youth at Copacabana beach in Rio de Janeiro, on July 25, 2013. Pope Francis is on the fourth day of his week-long visit for World Youth Day. Photo courtesy of REUTERS/Stefano Rellandini *Editors: This photo may only be republished with RNS-POPE-INDULGENCES, originally transmitted on Jan. 15, 2015.

Indeed, his first recourse to indulgences came early in his pontificate, when Francis declared that all those attending World Youth Day in Brazil in July 2013 would merit an indulgence if they also went to confession, took Communion at Mass and prayed for the pope’s prayer intentions.

He also said that those who could not make the event in Rio could obtain an indulgence if they followed the events on television or radio or “by the new means of social communication” — such as Twitter.

That led to misleading reports that Francis was offering time off Purgatory to those who follow the pontiff on Twitter, as a tactic for boosting the pope’s social media stats.

But the pope was not dissuaded by the controversy, and now with this special Holy Year, Francis has greatly expanded the chance for the faithful to gain an indulgence — though he delivered the news with his own version of a consumer protection warning:

“Be careful. Beware anyone who might be a little fast and very clever who tells you have to pay” to pass through a Holy Door, Francis told a crowd in St. Peter’s Square in December. “No! You don’t pay for salvation. It is free!”

Francis decreed that during the jubilee year, not only can pilgrims who cross through the special Holy Door in St. Peter’s Basilica or other Roman churches obtain an indulgence — that was always the tradition — but for the first time each diocese around the world will also have a Holy Door in one or more churches to make it easier for those who cannot afford to travel to get an indulgence. 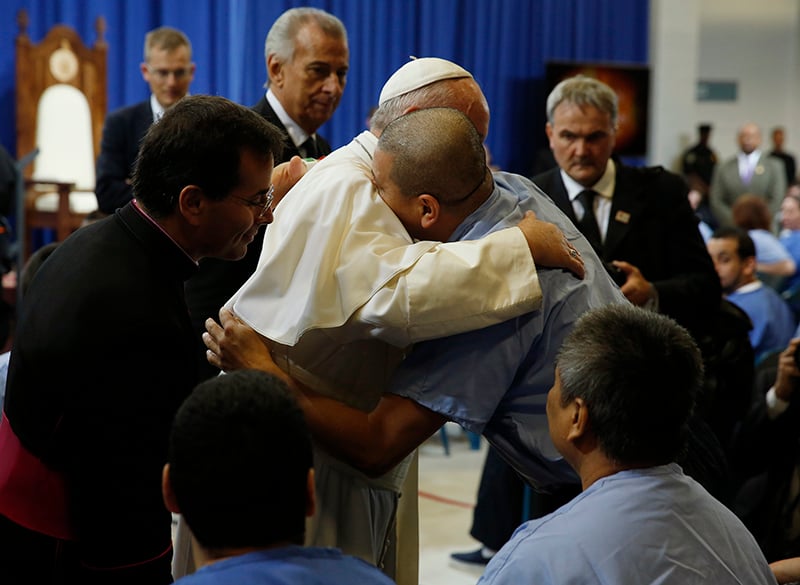 Pope Francis embraces an inmate as he meets with prisoners at Curran-Fromhold Correctional Facility in Philadelphia on September 27, 2015. Photo courtesy of REUTERS/Jonathan Ernst *Editors: This photo may only be republished with RNS-POPE-PRISONERS, originally transmitted on Sept. 27, 2015.

In addition, Francis made a provision so that those who are homebound or in prison can gain an indulgence, and that those who perform works of mercy can as well: “I wish that the Jubilee Indulgence may reach each one as a genuine experience of God’s mercy, which comes to meet each person in the Face of the Father who welcomes and forgives, forgetting completely the sin committed.”

Still, good intentions don’t always lead to broad agreement, especially when it comes to a teaching that carries as much baggage as indulgences.

“Such a practice promotes a vending-machine notion of God,” longtime Vatican-watcher Robert Mickens wrote in a blistering — and historically informed — column in Global Pulse against what he called the superstitious “dark side” of the Holy Year that “depends on people’s fears and gullibility.”

“(W)alking through a so-called holy door, either in the Eternal City or in Timbuktu, will mean nothing if it is tied to the idea that it earns a child of God a reduced sentence from some sort of detention center that precedes eternal life with his or her heavenly Father,” Mickens wrote.

On the other hand, Sara Maitland wrote in the Tablet of London, a leading Catholic weekly, that she finds the idea of indulgences very appealing, and she thinks the practice can, and ought, to be rescued from its shady past:

“I am going to keep trying because a ‘plenary indulgence’ is simply an outward and visible sign of the fullness of God’s mercy and indulgence towards us — divine courtesy, kindness and treating us with such favor as we have no claim to, but desire or like,” she said. “It is a matter of free grace.”

Perhaps if anyone can rehabilitate indulgences, it is in fact Francis, “the pope of mercy.”

“Francis wants a big-tent church with room for a wide variety of devotions,” Bellitto said. “The key for Catholics will be to remember that doing works of mercy is still more important than counting them up.”

One Eye Squinted
A tight job market is a chance for Christians to rethink work
Follow us on Facebook!
Submit your photos to RNS