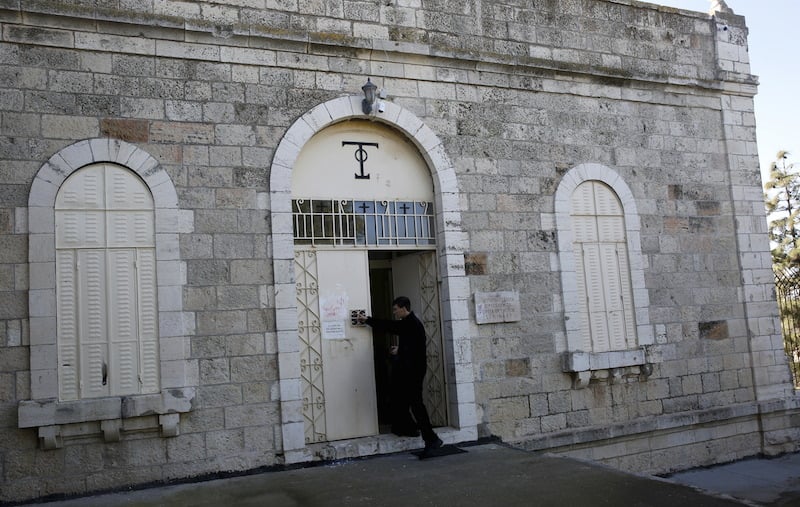 An Orthodox monk cleans graffiti from a door of the Greek Orthodox Seminary, located next to the Dormition Abbey on Mount Zion in Jerusalem’s Old City January 17, 2016. REUTERS/Ronen Zvulun –

JERUSALEM (Reuters) – Israel has arrested two Jewish youths for anti-Christian graffiti scrawled on a Jerusalem monastery, police said on Wednesday, after Prime Minister Benjamin Netanyahu ordered an investigation into the latest in a wave of hate crimes.

The 16- and 15-year-old males were suspected of involvement in Hebrew curses like “Christians go to hell” that were written in felt-tip pen on the doors and walls of the Dormition Abbey in Jerusalem’s Old City over the weekend, police said.

The Benedictine monastery bills itself as a bastion of inter-faith understanding. It is near a site where many Christians believe Jesus held the Last Supper as well as the tomb of the biblical King David, a big draw for pious Jews.

Israeli authorities have been struggling to stamp out hate crimes by Jewish ultra-nationalists targeting Christian sites as well as Palestinians and Israeli human rights activists.

Calling the Dormition Abbey vandalism an attack on religious co-existence, Netanyahu and his police minister had called for an accelerated probe to catch the culprits.

Jerusalem’s Old City, which Israel captured in the 1967 war and annexed as part of its capital in a move not recognised internationally, has been on heightened security alert during a months-long wave of Palestinian street violence, with wall-to-wall security camera coverage and paramilitary police patrols.

News
In Oregon, churches and anti-fascists unite to provide mutual aid to fire evacuees and others in need
News
Second coronavirus lockdown in Israel frustrates many religious Jews’ plans for High Holidays
News
Mike Pompeo accused of violating Hatch Act in Jerusalem RNC speech
Opinion
President Erdogan, preserve Hagia Sophia as a church
Opinion
How Judaism became caffeinated
© Copyright 2020, Religion News Service. All rights reserved. Use of and/or registration on any portion of this site constitutes acceptance of our User Agreement and Privacy Policy, Privacy Statement and Cookie Notice. The material on this site may not be reproduced, distributed, transmitted, cached or otherwise used, except with the prior written permission of Religion News Service.