Naghmeh Abedini, the wife of naturalized U.S. citizen Saeed Abedini who was detained in Iran in 2012, is pictured in the home of her parents in West Boise, Idaho, January 20, 2016. REUTERS/Ben Klayman.

BOISE, Idaho – Naghmeh Abedini is looking forward
to reuniting next week with her husband, Saeed, the
Iranian-American pastor freed on Saturday after more than
three years in an Iranian prison.

But she’s not rushing the reunion.

In an interview at her parent’s home in Boise, Idaho on
Wednesday, Abedini said that rebuilding their marriage after
her husband’s imprisonment will take time.

The relationship, she said, has been strained in recent
months by the publication of an email she sent to friends and
supporters late last year. Her note described “physical,
emotional, psychological and sexual” abuse by her husband, who
she said was addicted to pornography.

Reuters could not independently confirm Abedini’s
allegations about her husband.
Saeed Abedini was traveling to Asheville, North Carolina on
Thursday and could not be reached for comment.

Suzan Johnson Cook, Ambassador-at-Large for International
Religious Freedom under Obama for more than two years until late
2013, said she was not aware of any abuse allegations during the
time she advocated on Saeed Abedini’s behalf.

“I dealt with it strictly from a political standpoint,” she
said. “I came to know her through the meetings at the State
Department, but in terms of private life, that wasn’t my
business.”

Saeed Abedini, 35, a naturalized U.S. citizen, was sentenced
by an Iranian court in 2013 to eight years in prison for
allegedly compromising Iran’s national security by setting up
home-based Christian churches there. He was arrested after
returning to Iran for what was supposed to be a short trip to
set up an orphanage.

RELATED STORY: Pastor who was freed by Iran rests with his family at Billy Graham retreat center

“I have hope that we can work through all the issues and we
can restore our marriage,” Naghmeh Abedini, 38, told Reuters in
a wide-ranging interview. “My Christian faith does give me a lot
of hope in that.”

Naghmeh Abedini said she expects the family will enter
counseling, and that she will continue working to promote
religious freedom and bring attention to Christian persecution.

In the first months of her husband’s confinement, Abedini
said, their contact was limited to what she
called “phone-to-phone calls.” He would occasionally be allowed
to call his parents in Tehran, and they would then dial her on a
separate line and hold the phones together. His parents
subsequently moved to the United States.

Later, she said, the couple communicated directly on a
number of occasions by phone or Skype. During that time, Naghmeh
said, her husband became increasingly abusive, possibly because
of his long confinement. She declined to elaborate on the
nature of the abusive behavior.

Half a dozen Saeed Abedini supporters reached by Reuters all
said they had no direct knowledge of any abuse. 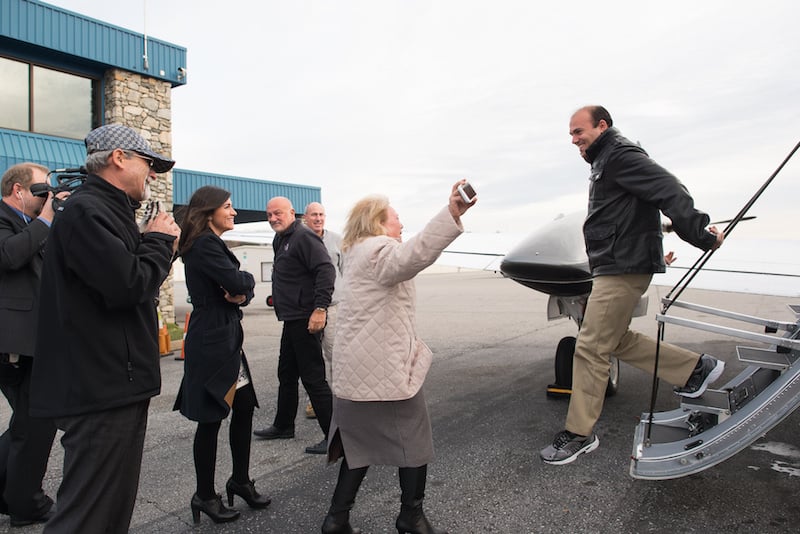 Pastor Saeed Abedini steps off a private jet in Asheville, N.C., Thursday (Jan. 21), and is greeted by his mother and sister. Abedini was jailed for three years in Iran. He will spend time resting at the Billy Graham Training Center. Photo courtesy Samaritan’s Purse

Mark DeMoss, a spokesman for Christian evangelist Rev.
Franklin Graham, who advocated for Saeed’s release from prison,
said, “I can’t speak to his thoughts or reaction to anything
Naghmeh has said or written about their marriage.”

Luke Caldwell, a family friend and son of the founder of
Cavalry Chapel where the Abedinis attend church, described their
reunion as a “complex situation” that requires “a lot of prayer
and support.”

“You wish it was as easy as, everyone’s fine, but 3-1/2
years of separation and disconnection,” he said. “Ultimately,
they need to reunite that love and that connection.”

Graham and other faith leaders took up the cause of Saeed
Abedini, whom they saw as a symbol of Christian persecution.
Politicians, too, advocated on his behalf. Texas Sen. Ted
Cruz prayed for Abedini outside the White House, and Donald
Trump hosted Naghmeh Abedini at a meeting in New York. President
Obama, too, spoke with her, promising that he would do all he
could to secure her husband’s release.

Saeed Abedini, who arrived in the United States on Thursday,
will spend several days with his parents at a North Carolina
retreat run by Graham, his wife said. She said she and their
children – Rebekka, 9, and Jacob, 7 – will join him there on
Monday.

North Carolina Rep. Robert Pittenger, who spoke with
Saeed at a U.S. military hospital in Germany where the Idaho
pastor received medical attention, said on Wednesday that Saeed
was “in great shape” physically and looked “strong.”

At times, Abedini was convinced he wouldn’t make it out of
jail alive, Pittenger said, but his captors began treating him
better in the last months of his ordeal.

“He’s been through some pretty harsh treatment,” said
Pittenger, who spent three years advocating for Abedini’s
release. “He said, ‘I’m a changed person. I’ll never be the same
after what I’ve been through.'”

Pittenger added: “He wants to be a good husband and father.”

Saeed and Naghmeh Abedini met in Iran in 2002, while she was
there on what she says was a “crazy one-year mission” to share
her Christian faith with her Muslim relatives. Captivated by
Saeed’s religious passion, and his work in establishing
home-based churches, Naghmeh, returned to Iran in 2003. The
couple married about a year later.

“He just grabbed my attention,” she said. “He was really
passionately worshipping. I feel like there was a light on him.”

Abedini said that she and her twin brother converted to
Christianity from Islam when they were 9 years old, soon after
moving to the United States with their parents to escape the war
with Iraq. She said they were introduced to the religion by a
family member living in the United States.

At the time, she said, her Muslim parents were horrified by
the conversion, but 13 years later, they and her younger sister
also embraced Christianity.

Naghmeh Abedini’s parents declined to be interviewed.
Saeed Abedini, who became a Christian in 2000, came to the
attention of Iranian authorities because of his work encouraging
home-based Christian churches, his wife said . After he was
taken in for questioning in late 2005, the couple left the
country rather than risk arrest.

Iranian officials did not immediately respond to a request
for comment on the circumstances of Abedini’s legal troubles and
imprisonment in Iran.

When the Abedinis and their children returned to visit his
family in 2009, Naghmeh Abedini said, Saeed was under house
arrest for three months, during which time he was questioned
repeatedly for up to 14 hours at a time.

Another family visit to Iran in 2011 was cut short by fears
of another arrest, Naghmeh Abedini said, causing her to decide
never to return. Her husband went back in 2012, however, with
plans to establish an orphanage. He was placed under house
arrest in June of that year and imprisoned in late September.

“It was probably not the smartest idea to go back, with all
the history,” Naghmeh Abedini said, “but he did it, and as a
wife, I just let him.”

During most of her husband’s time in prison, Abedini served
as the public face of the campaign for his release. But their
private conversations, she said, became ever more fraught.
“I just couldn’t understand – the more I fought for him the
more abusive he was becoming,” she said.

Because of that, and out of concern that she wasn’t spending
enough time with her children, Naghmeh Abedini decided to pull
back from her advocacy work in the fall of 2015. At that time,
she sent the emails about her marriage that attracted so much
attention. She said she was “very upset” when they were made
public, in a Christianity Today article, and that her husband
was “devastated.”

“I don’t know what’s next, and that’s OK,” she said. “Right
now, in my life, I’m at a place of complete unknown, and I’ve
come to find peace with that.”