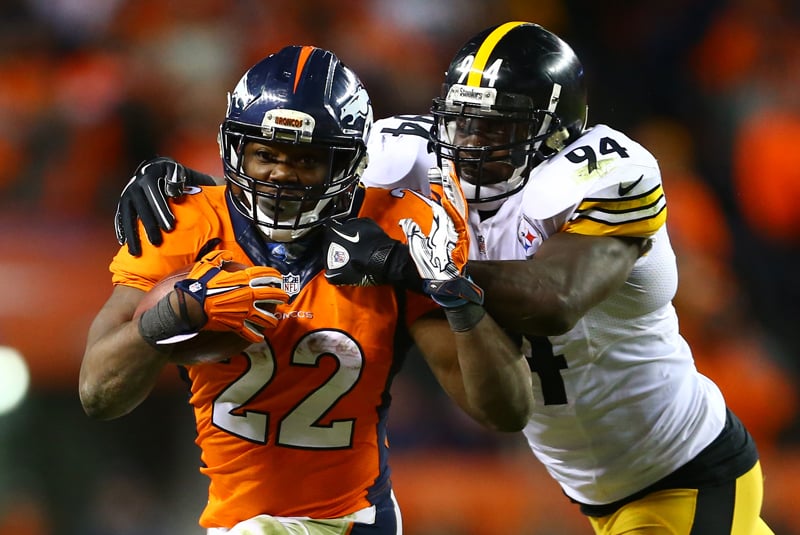 Denver Broncos running back C.J. Anderson (22) runs against Pittsburgh Steelers inside linebacker Lawrence Timmons (94) during the fourth quarter of the AFC Divisional round playoff game at Sports Authority Field at Mile High in Denver on Jan. 17, 2016. Photo by Mark J. Rebilas-USA TODAY, courtesy of REUTERS
*Editors: This photo may only be republished with RNS-FOOTBALL-VIOLENCE, originally transmitted on Jan. 28, 2016.

(RNS) For all the headlines about football violence, concussions and player injuries, watching football is not a “guilty pleasure” for many Americans. It’s just a pleasure, a new survey finds.

A Seattle-area high school football coach made headlines recently when he was suspended from his job after refusing to halt praying in public during games. He’s now filed a federal discrimination suit, according to The Seattle Times.

The 73 percent who approve of such prayers included 93 percent of white evangelicals and 55 percent of people who say they have no religious identity.

The bone-crunching NFL game is by far Americans’ favorite sport to watch, even though the PRRI/RNS survey finds the audience for it drifting slowly off. And more people say they would not allow a young son to play the game.

“An overwhelming number of Americans believe that football is more dangerous than other sports. However, they also think the hard-hitting nature of the game is either integral to the sport or at the very least it’s acceptable,” said Dan Cox, research director for PRRI.

When asked what bothered them most about professional football, violence was mentioned by only 17 percent of those surveyed, behind athletes’ off-the-field behavior:

Football was tops on the favorite sport list for 38 percent of U.S. adults. Basketball  was a distant second at 11 percent.

RELATED STORY: What’s God got to do with football devotion? Plenty

And concern with violence is divided by generations, he said.

“Older people are more in touch with news and more familiar with coverage of injuries and the concern about concussions,” said Cox. “Young adults don’t bring a lot of history to the questions.”

Overall, 31 percent said they wouldn’t let their child play competitive football, up from 22 percent in the PRRI survey in January 2015.

“Would you let your son play?” became a popular question with pollsters after President Obama, father of two daughters, told The New Yorker in 2014 that if he had a son, he wouldn’t allow it. New York Magazine found nine NFL stars who would hesitate or forbid it as well.

Young adults are also the least concerned about the dangers posed to players by the violence of football, said Cox.

Only 11 percent of young adults said football has become more dangerous than other sports, compared with 40 percent of seniors (65 and older).

But young Americans (age 18 to 29) are shifting away. It’s not the sight of helmet-on-helmet collisions, but rather “sports pluralism,” said Cox, citing increased interest in watching other sports such as soccer or hockey or auto racing.

The survey found: 72 percent of young adults would be fine with allowing a son to play, compared with only 50 percent of seniors.

A finding that was probably no surprise: Most Americans (68 percent) say they’re likely to watch the Super Bowl this year.