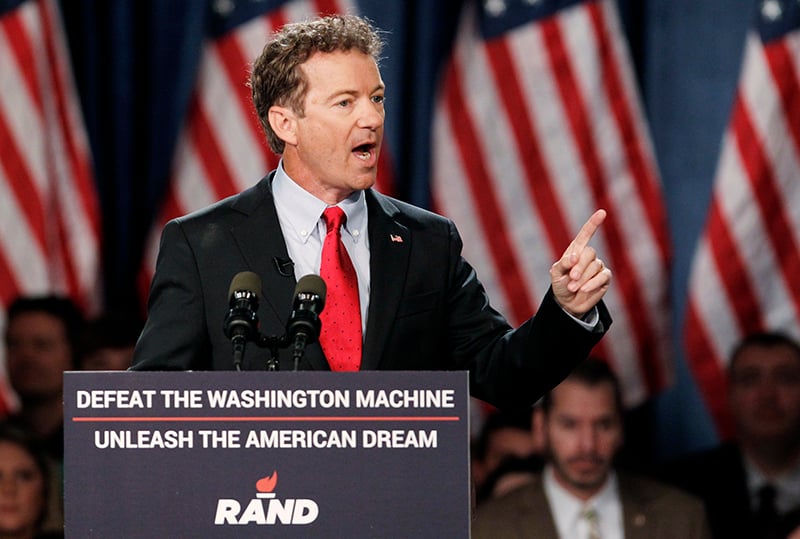 U.S. Sen. Rand Paul formally announces his candidacy for president during an event in Louisville, Ky., on April 7, 2015.  Photo courtesy of REUTERS/John Sommers II *Editors: This photo may only be republished with RNS-RANDPAUL-FAITH, originally transmitted on April 7, 2015.

Paul, 53, was baptized an Episcopalian. It didn’t stick. He attended Baylor University, a Baptist school in Texas, then Duke University. He now attends a Presbyterian church. In this, he is like most Americans — all over the map in terms of his religious affiliation.

2. And he got a little crazy in college, too.

At Baylor, Paul joined the NoZe Brotherhood, a secret and controversial society that routinely skewers the school’s Baptist roots and other aspects of undergraduate life. His association with the group came back to bite him in his initial run for the Senate after GQ magazine ran a story claiming NoZe was dedicated to “blasphemy,” and Paul, while high as a kite, helped kidnap a coed and forced her to pray to “Aqua Buddha,” a  made-up water idol. Paul threatened to sue the magazine.

Paul’s wife, Kelley, has served as a deacon in the couple’s Presbyterian church. In the wake of the Aqua Buddha accusations, she told the press, “Rand and I are both Christians and our faith is very important to us.”

Paul revealed more on this in speeches at the Family Research Council’s Values Voter Summit — an annual gathering of social conservatives considered necessary to winning the evangelical vote.

But his relationship with its members has been uneven, at least in terms of his faith. In 2012, he detailed his personal struggle with religion, saying: “My faith has never been easy for me, never been easy to talk about and never been without obstacles. I do not and cannot wear my religion on my sleeve. I am a Christian but not always a good one. I’m not completely free of doubts.”

4. His mentions of religion stepped up as he readied for the 2016 race.

Speaking at the same event one year later, he echoed evangelicalism’s belief in a “war” on Christianity: “From Boston to Zanzibar, there is a worldwide war on Christianity.” In February 2015, Paul appeared on televangelist Marcus Lamb’s Daystar television program and said he had been “saved” more than once.

At a private prayer breakfast in Washington, D.C., in March 2015, Paul told his audience: “The First Amendment says keep government out of religion. It doesn’t say keep religion out of government. So, you do have a role and a place here.”

The question of confronting the Islamic State group abroad and preventing terrorism at home has backed several candidates into extreme positions. Paul tried to avoid that when asked by the website ThinkProgress about increased anti-Muslim violence in the United States:

“He immediately pivoted to border security. ‘If we want to defend ourselves against a war on terror, we have to focus on the border,’ he said, before outlining broadly his terrorism strategy. Pressed further to specifically address violence against Muslims in America, he pivoted to Donald Trump. ‘It’s a mistake, as Trump has put forward, to have a religious test to have Muslims into the country,’ he said.”

Progessive humanists have accused Rand of making a run to the right by playing up his opposition to gay rights and abortion while still waving a libertarian flag.

At a GOP debate in December, Rand said censoring the Internet was no way to combat terrorism — one of the hottest issues for GOP contenders.

“If we ban certain religions, if we censor the Internet, I think that at that point the terrorists will have won. Regime change hasn’t won. Toppling secular dictators in the Middle East has only led to chaos and the rise of radical Islam,” Paul said.

” … As commander in chief I will do whatever it takes to defend America. But in defending America, we cannot lose what America stands for. Today is the Bill of Rights anniversary. I hope we will remember that and cherish that in the fight on terrorism.”

(Kimberly Winston is a national correspondent for RNS; Cathy Lee Grossman contributed to this report)