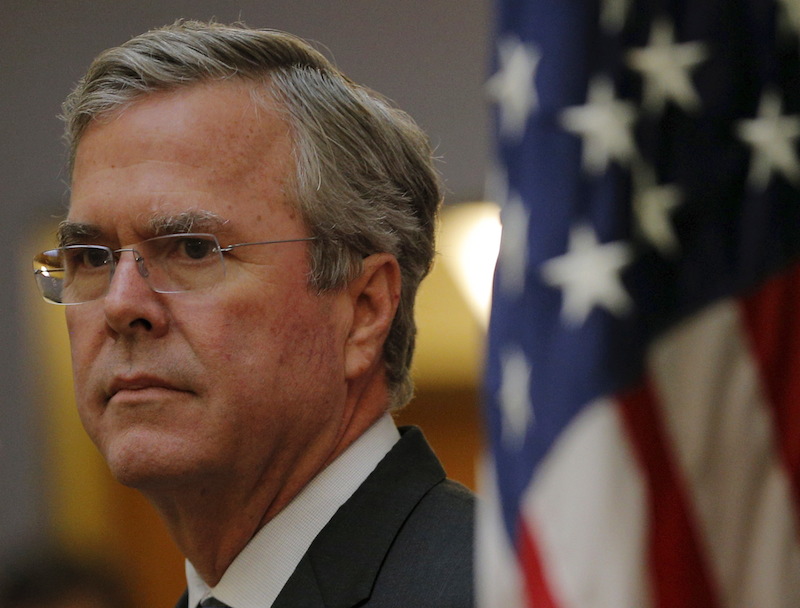 UPDATE: Jeb Bush withdrew from the 2016 race on February 20.

Like his Republican brethren, Catholic convert Bush, who turns 63 on Feb. 11, 2016, is chasing the conservative Christian vote in the primaries. But unlike evangelical Sen. Ted Cruz, fellow Catholic Sen. Marco Rubio or nominally religious mainline Protestant Donald Trump, Bush is making no connection with the faith crowd. Or any crowd: His poll numbers were mired near the bottom all winter.

1. Like many Americans, he comes from a religiously mixed family.

His great-grandfather was a Catholic. His father, George H.W. Bush, was raised Episcopalian, and mother, Barbara, grew up Presbyterian. His brother George W. is an evangelical who drew voters with his narrative about giving up his partying ways after a talk with Billy Graham. Jeb Bush married his wife, Columba, a Catholic, at the University of Texas’ Catholic student center when he was just 21 years old in 1974.

He joined the Catholic Church in a ceremony at the Easter vigil in 1995, finding wisdom and solace in it a year after a brutal campaign and humbling defeat in his first run to be Florida’s governor, according to The Washington Post. This winter, Bush told a New York Times reporter, “I loved the absolute nature of the Catholic Church. It resonated with me.”

Jeb Bush has long been more overt than his father or brother were about campaigning and governing on a religion-based moral agenda. “It’s not an imposition of faith. It’s who you are,” he told the Florida Catholic in 2007.

Whether he’s talking about the unborn or the terminally ill, Bush told Jim Daly, president of Focus on the Family, his “deeply held belief” is that “the most vulnerable in our society need to be protected. They need to have legal rights. And as a society, we need to recognize their value and their worth.”

As Florida governor, he pushed laws to limit abortion, and he offered state funding to crisis pregnancy centers that counseled against it, he told Daly in an April 13 radio interview. Bush tried unsuccessfully to block the effort by Terri Schiavo’s husband to disconnect the artificial food and hydration that kept his irreparably brain-damaged wife alive. Bush also opposes physician-assisted dying, now legal in five states.

3. But he’s not 100 percent in line with Catholic teaching on all points.

Bush is in accord with the Catholic bishops on pushing for immigration reform, according to The New York Times, which tracked Bush to his Coral Gables, Fla., church one Sunday in March and photographed him passing the peace.

But he doesn’t heed Catholic teaching on one matter of life and death. Like 59 percent of white Catholics in a Pew Research Center survey,  he supports the death penalty. Florida executed 21 prisoners during his two terms as governor, 1999-2007, according to the Tampa Bay Times.

Bush accused liberals of seeking to undermine religious freedom. According to Reuters, he said “fashionable opinion” has a problem with Christians and the only proper response is “a forthright defense” of the constitutional right to freedom of religion.

“Federal authorities are demanding obedience, in complete disregard of religious conscience,” he said. “In a free society, the answer is no.”

Still, amid a furor over elected officials refusing to issue marriage licenses for same-sex couples, Bush called for “balance.”

Despite his outreach to evangelical voters, Bush chose not to speak at the Values Voter Summit in Washington, sponsored by the conservative Family Research Council. However, Bush, hoping to be the nation’s second Catholic president, did find his way to the capital to see Pope Francis celebrate the canonization Mass for St. Junipero Serra in September 2015.

He refused to play bash-the-Muslims with debate rivals. In a January debate, he slammed Trump’s proposal to ban Muslims from entering the United States.