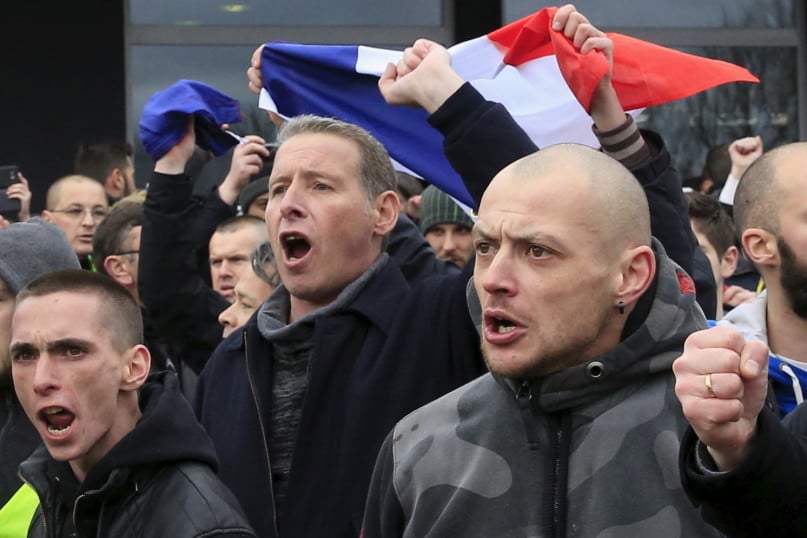 Activists against migrants shout slogans as they participate in a protest organized by the anti-Islam group PEGIDA, in Calais, France, February 6, 2016. REUTERS/Pascal Rossignol.

DRESDEN, Germany – Germany’s anti-Islam PEGIDA movement staged rallies in several cities across Europe on Saturday to protest against the arrival of hundreds of thousands of migrants from the Middle East and Africa.

The movement, whose name stands for Patriotic Europeans Against the Islamisation of the West, originated in the eastern German city of Dresden in 2014, with supporters seizing on a surge in asylum seekers to warn that Germany risks being overrun by Muslims.

After almost fizzling out early last year, the movement has regained momentum amid deepening public unease over whether Germany can cope with the 1.1 million migrants who arrived in the country during 2015.

The alleged involvement of migrants in assaults on women in Cologne on New Year’s Eve has also spurred PEGIDA, which says it is proof that German Chancellor Angela Merkel’s welcoming stance to refugees is flawed.

“We must succeed in guarding and controlling Europe’s external borders as well as its internal borders once again,” PEGIDA member Siegfried Daebritz told a crowd on the banks of the River Elbe who chanted “Merkel must go!”.

Police in Dresden declined to estimate the number of protesters. German media put the number at up to 8,000, well below the 15,000 originally expected by police.

Hundreds of counter-demonstrators also marched through Dresden under the motto “Solidarity instead of exclusion”, holding up placards saying “No place for Nazis”.

Far-right groups see Europe’s refugee crisis as an opportunity to broadcast their anti-immigrant message. There were 208 rallies in Germany in the last quarter of 2015, up from 95 a year earlier, Interior Ministry data showed.

Protests also took place on Saturday in other cities, including Amsterdam, Prague and the English city of Birmingham. Supporters of the anti-Islam movement Patriotic Europeans Against the Islamisation of the West (PEGIDA) carry German and Russian flags during a demonstration in Dresden, Germany, February 6, 2016. REUTERS/Hannibal Hanschke.

In Calais, in northern France, more than a dozen people were arrested during a protest that was attended by more than a hundred people despite being banned, local authorities said.

Thousands of migrants fleeing war and poverty in Africa and the Middle East camp out in Calais, hoping for a chance to make the short trip across the English Channel to Britain.

In Prague, an estimated 2,200 people including both supporters and opponents of Pegida held a series of rival demonstrations around the Czech capital. Police had to intervene in one march when supporters of the migrants came under attack from around 20 people who threw bottles and stones.

Later, around 20 masked assailants threw Molotov cocktails during an attack on a center that collects donations for refugees, forcing the evacuation of the building and injuring one person who was hit by glass, police said.

In Warsaw, hundreds of people waved Polish flags and chanted “England and France are in tears, that’s how tolerance ends”.

The Czech Republic, Slovakia, Hungary and Poland have together taken a tough stance on migration and have been largely opposed to taking in significant numbers of refugees.