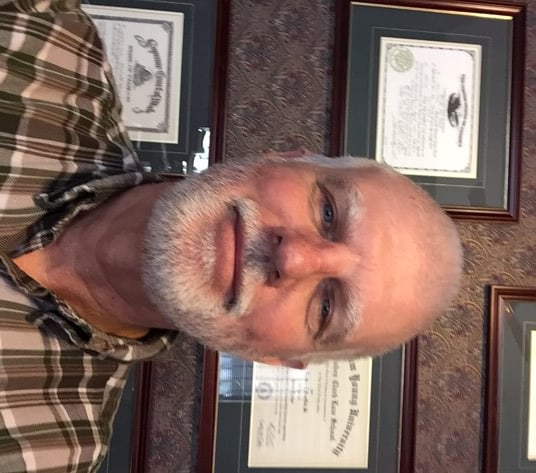 In my interview with him last month (see here for the first installment), he used words like “destructive,” “terrible,” and “disaster” to describe it. Here are a couple of choice comments:

“My wife and I go on hour-long walks and talk constantly the whole time. She’s my best friend. The most interesting and trusted person in my life is my wife. If you were to throw another woman into that mix, it would be destructive. It would be terrible. People who think that polygamy is somehow commendable must not have a decent marriage.”

“I think polygamy is a disaster. I think it is disrespectful of women. I think it is harmful in relationships, and polygamy is its own punishment. It didn’t work happily in the case of Abraham and Hagar, or Jacob. If you look at Jacob’s 11 sons selling a 12th into slavery, it didn’t turn out happily for the family at that point (though God intervened ultimately). If you want to get a lesson in self-inflicted wounds, polygamy is a good place to start.”

Some strong condemnations there. Snuffer’s views on polygamy in fact dovetail pretty nicely with his emphasis on getting back to the time of Joseph Smith. He believes Brigham Young misinterpreted and overemphasized polygamy, which was—wait for it—something Joseph Smith never actually practiced as a sexual arrangement for this world. Snuffer says it was an extension of “sealing” which, at first, had only a single ordinance: marriage. “Immediately before Joseph’s death another innovation for sealing was introduced: man-to-man sealing, or ‘adoption,’ which did not require marriage to implement sealing into the family of God.”

Even though the LDS Church recently (and controversially) conceded that Smith had more than 40 wives, including one who was just fourteen years old, Snuffer says the primary evidence doesn’t back it up.

He has done extensive research on the life of Joseph Smith, drawing on journals, sermons, and newspaper articles. He believes the only evidence that Smith practiced polygamy as a sexual relationship in this life comes from after his death in 1844, and that “if you take all of the material you can track to Joseph Smith before June 27, 1844, and you consider only that story, Joseph and polygamy have a very different relationship than after that.” Church leaders after Smith’s death, Snuffer claims, wanted to give their plural marriages that extra stamp of approval by claiming that the practice had begun with Smith himself.

There is no DNA evidence that Smith fathered children with any women but Emma, says Snuffer. “If Joseph Smith was the aggressive advocate of bedding women as part of the duty to propagate righteous seed, and raise up seed unto God, he was a miserable failure with anyone except Emma Smith, whom he impregnated nine times.”

Obviously, many historians are going to refute Snuffer’s claims about Joseph Smith and polygamy—Brian Hales, in fact, has a lengthy rebuttal here—but I am frankly less interested in the did-he-or-didn’t-he question than I am in the contemporary issue of just what is at stake in the telling.

The fact is that Mormons hate polygamy. In one national survey, 86% of Mormons said that polygamy was “morally wrong,” which is an even higher percentage than similarly disapproved of abortion (74%) or sex outside of marriage (79%).

I can imagine that any historical theory that aims to let Brother Joseph off the hook for instituting sexual polygamy would be very appealing indeed.

Considering how strongly Snuffer has condemned polygamy, even to the point of making the controversial claim that Joseph Smith never practiced it, why have I seen Snuffer’s movement associated with at least a few people reviving it?

I think there are two factors at play here:

The first of these factors is pretty clear. In Snuffer’s loose confederation of fellowship groups, each one decides its own membership criteria. “The associations are entirely voluntary,” he said. “It would be up to the local folks to determine what, if anything, to do” if a current member decided to start practicing polygamy.

He has spoken out against it, particularly at a talk in St. George that called for plural marriage to end. “We do get people who are inquiring and interested from the UAB, the FLDS, a number of these polygamist groups,” he said.

So what happens if people who are already practicing polygamy want to join a local fellowship?

“I suggested that if there were those out there who were polygamists already and they wanted to leave their polygamist group and join us, that we ought to baptize them. I would not expect to break up any polygamous family. But their children ought to be taught that polygamy needs to end. I wouldn’t have it continue on into the next generation.”

Just because Snuffer opposes polygamy doesn’t mean he has the authority to force that opinion on anyone else, he cautioned. That’s just the nature of this loose confederation of fellowship groups.

The second point is a little harder to prove. Mormons need a new category beyond the Fundamentalist = Polygamist assumption. Denver Snuffer can be regarded as a fundamentalist in the way that many religious scholars would define that word, because he seems to be guided by a strict if not literal approach to the religion’s founding sacred texts. He also advocates a return to a purer form of that religion by throwing off some modern accretions (in this case, the teachings of all LDS prophets after Joseph Smith).

The problem is that in Mormon lingo, the word “fundamentalist” has been hijacked as a specific code for “Plural marriage is practiced here!”

Clearly, we need some new terminology for all the dissertations that will likely come out of this someday.

Ed note: Duh on me! The version of this post that I put up the first time was not the edited version that Denver had sent back to me with a couple of key corrections or clarifications of his views, but the first draft. It was totally an error on my part that I used the first version in my haste this morning. I have since made the changes so the version you are seeing is the one that more accurately reflects his views. I’m sorry for the mistake.