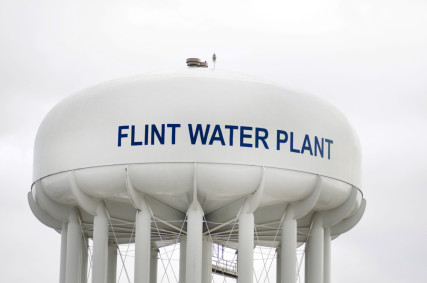 When I think about what is going on in Flint, Michigan — to coin a phrase: it makes me wanna holler.

It all started when a cheaper municipal water supply was chosen for Flint — the Flint River. The river water corroded the city’s pipes.

It is nothing less than a toxic (literally) mix of governmental incompetence and apathy. It is the reckless endangerment of an American city of 100,000 people — especially its children.

Did I mention that Flint is mostly black, with a poverty rate of about forty percent? And that the residents of Flint are still paying for their water, though they have no idea when it will be safe again?

Some of you might remember Flint. It “starred” in Michael Moore’s film, “Roger & Me,” in which he chronicled his hometown’s decline, due to General Motors closing its factories and putting tens of thousands of people out of work. Michael continues to advocate for his hometown.

But it is not just Flint. There are hazardous lead levels in Durham and Greenville, NC; in Columbia, SC; and in Jackson, MS.

Eighteen cities in Pennsylvania, and eleven in New Jersey, might have an even higher share of children with dangerously elevated levels of lead than Flint. This health crisis has gone on for decades.

And then, there’s my own hometown — Bethpage, New York, in the middle of Long Island.

For a long time, the pride of Bethpage was the Grumman Aircraft Engineering Corporation, a leading producer of military and civilian aircraft.

Grumman produced the F-14, space vehicles, surveillance aircraft, and civilian corporate jets. Many of my neighbors worked at Grumman.

But here is what no one seemed to know. Grumman used chlorinated hydrocarbons to clean metal parts of aircraft prior to painting. They disposed the waste chemicals in sumps. The chemicals drained into the soil.

In the early 1970’s, Grumman employees noticed that the water on the site tasted strange. It had a bad odor. It was discovered that the Grumman water well system was contaminated by trichloroethene (TCE).

The Bethpage Community Park, where we used to play, is adjacent to Grumman. There are significant levels of PCBs and TCE in its soil.

The contamination spread. According to some estimates, there is now a thirteen square mile plume of underground contamination that has emanated from Bethpage. It is more than sixty stories below ground. It threatens adjacent towns.

Bethpage has had a major cancer problem for years. How many of my former neighbors, and how many of my friends’ parents, should have “Grumman” as the cause of death on their death certificates?

Grumman’s technology helped put a man on the moon.

But what good is putting a man on the moon if people are getting poisoned in your own neighborhood back on earth?

The religious communities in Flint have done an outstanding job of responding to this crisis.  Catholic Charities is giving out water and food. The Flint Jewish Federation is collecting water and water filters. The Michigan  Muslim Community Council has distributed more than 120,000 bottles of clean water.

As well they should — because this is a religious issue.

Guess where polluting facilities and environmental hazards are most likely to be found?

Near poor and minority neighborhoods.

Because, after all — who cares?

What would the Bible say?

“Do not rob the wretched because he is wretched; do not crush the poor man in the gate; For the LORD will take up their cause and despoil those who despoil them of life.” (Prov. 22:22)

Or, what would Moses Maimonides, the medieval Jewish philosopher, say?

Remember: Maimonides’ day job was as a physician. (Check out the various books on this subject by Fred Rosner).

“The first thing to consider…is the provision of fresh air, clean water, and a healthy diet…City air is stagnant, turbid, and thick, the natural result of its big buildings, narrow streets, the refuse of its inhabitants…one should at least choose for a residence a wide-open site…living quarters are best located on an upper floor…and ample sunshine…. Toilets should be located as far as possible from living rooms. The air should be kept dry at all times by sweet scents, fumigation, and drying agents. The concern for clean air is the foremost rule in preserving the health of body and soul.”

Even back in the 1100s, Maimonides realized that cities can make you sick.

Why? Because the water supply can become contaminated by raw sewage.

The result: dysentery and cholera.

Back in the beginning of creation, says an old Jewish legend, God told humanity: “I made other worlds before this one. They didn’t work out. This is the last one that I am making. Don’t blow it.”

Right about now, God is looking at what is happening in Flint.

And God is weeping.