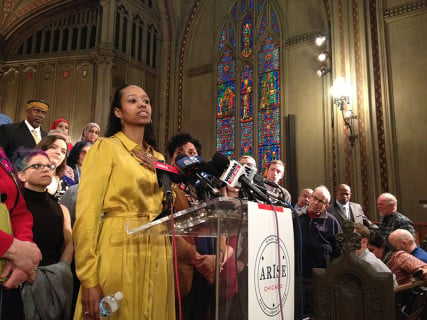 Wheaton College and Professor Larycia Hawkins today announced plans to part ways, peaceably and in some kind of “reconciliation.” Both were undoubtedly ready to put their highly publicized dispute behind them. Much remains undisclosed. We do know that the Provost publicly apologized and was moved aside from the farewell program; the President expressed his appreciation for and endowed scholarships in the Professor’s name; the Professor expressed gratitude for this stage in her journey.

It is significant that what many took to be the core issue in the case — the theological question of whether Christians and Muslims “worship the same God” — remained officially unresolved. Professor Hawkins did not back down. Wheaton College did not back down.

I suggested a month ago that the theological question was secondary rather than primary. I believed that what got the ball rolling was that a highly vislble, politically progressive, theologically evangelical, African-American female professor had run afoul of the conservative Wheaton political culture multiple times — this last time because she expressed visible, physical solidarity with Muslims at a most inopportune moment in the American and evangelical political context. Nothing I have heard since has changed my view.

This whole situation has been reminding me for quite some time of the Dreyfus Affair in late 19th and early 20th century France. Probably only someone who spent way too many doctoral hours studying the Holocaust would think of this parallel. But indulge me for just a moment.

Alfred Dreyfus was a captain in the French army who in 1894 was accused of treason for allegedly passing military secrets to a German military official. Dreyfus also happened to be the only Jewish officer in the French General Staff, at a time of rampant and rising anti-Semitism in France. The evidence against Dreyfus was weak, and his secret military trial was grossly unfair. He was convicted, publicly humiliated (to cries of “Death to the Jews”), stripped of his rank, and sent off to exile on Devil’s Island. The case was capitalized upon by the anti-Semitic French Right to claim that Jews could not be trusted and should not enjoy full and equal citizenship rights in France.

Protests over the handling of the Dreyfus case extended far beyond the Jewish community. Two years after Dreyfus was convicted, a newly appointed, actually quite anti-Semitic French officer named Picquart investigated the case afresh and concluded that Dreyfus was innocent, that a non-Jewish officer named Esterhazy was guilty, and that the French Army had known this and covered it up. His protests were seen as embarrassing to the French Army and so Picquart was transferred to Tunisia.

Shortly thereafter the French novelist Emile Zola offered a famous page-one protest. He accused the French Army of the cover-up and a gross miscarriage of justice. He was in turn convicted of libeling the Army and had to flee France.

By this point it seemed all of France had taken sides in L’Affaire Dreyfus. Conservative forces, including the Army and the Catholic Church, were committed to his guilt and to its political implications. Republicans, radicals, and socialists were committed to his innocence and to its implications. The case was no longer about Dreyfus — it was about whether France was going to be a modern liberal republic or an authoritarian, reactionary Catholic state.

It took until 1906 for Dreyfus to be fully exonerated and restored to his military rank. The forces of reaction were finally defeated, though not destroyed. The argument that France had been having about what kind of country it wanted to be continued for decades more.

My comparison is this: in L’Affaire Hawkins, this case was only superficially about whether a previously unknown political science professor at Wheaton had violated the Wheaton doctrinal statement.

Eventually, at least, it was about the forces lining up on either side of Professor Hawkins. It was about what they think not just Wheaton, but evangelical Christianity as a whole, ought to be. Does the best future for American evangelical Christianity look more like Professor Larycia Hawkins — both her person and her convictions — or more like those who wanted her gone?

The actual outcome at Wheaton, stripped of the nice words today, is that those who wanted Professor Hawkins gone did in fact prevail. She is leaving. That does say something about who currently has the upper hand in defining American evangelicalism. Unlike in the Dreyfus case, the conservative side won.

Which is yet another really good reason for me to say this: I personally renounce any identification with that side of American evangelical Christianity that arrayed itself against Larycia Hawkins. I will fight, alongside many others, for a better version of Christian faith than the one you offer.