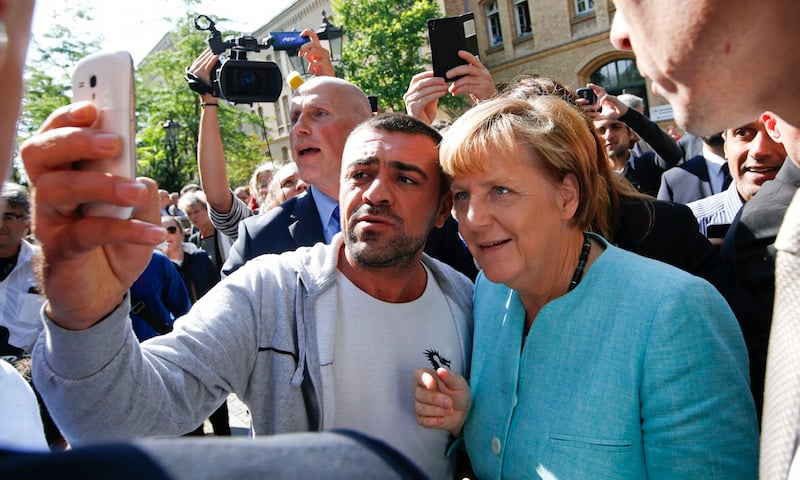 A migrant takes a selfie with German Chancellor Angela Merkel outside a refugee camp near the Federal Office for Migration and Refugees after registration at Berlin’s Spandau district, Germany Sept. 10, 2015. Photo courtesy REUTERS/Fabrizio Bensch

PARIS (RNS) Germany’s Christian churches, long the most positive voices greeting waves of Middle Eastern refugees pouring into the country in recent months, have begun to admit the need to limit the flow now that public opinion towards the newcomers has turned from welcoming to wary.

They continued preaching this through Christmas and New Year, saying Germany could not set an upper limit to its hospitality, even though Merkel gave in to rising criticism and falling poll ratings in mid-December to say that she would “noticeably reduce the number of refugees.” 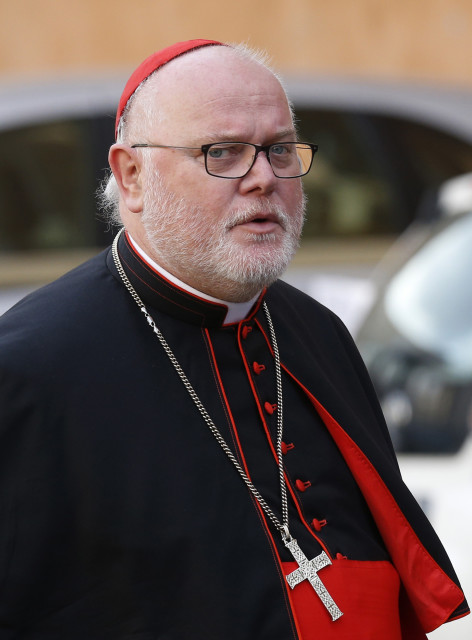 But a shocking spree by migrants sexually harassing hundreds of women in Cologne and other cities on New Year’s Eve finally snapped the public’s patience. Germany continues to be open to most Syrians, but is working urgently to find ways to stop others from coming and deport those who have no right to political asylum.

After a few weeks’ delay, the heads of both the Catholic and Protestant churches have shifted their focus and begun to speak about controlling the number of arrivals.

“It’s not just about mercy, but also about reason,” Munich’s Cardinal Reinhard Marx, the head of the German Catholic bishops, said this week. “Politics must always focus on the possible and there certainly are limits. Germany cannot take in all of the world’s suffering people.”

Heinrich Bedford-Strohm, Bavaria’s Lutheran bishop and head of the Evangelical Church in Germany, said it was “clear that we have to want” a reduction in refugees. He warned against debates about which immigration policy was more moral.

The shifting emphasis from religion to realpolitik marked the end of an unusual period during which many Germans seemed to forget order and rules to take a firm moral stand to help the desperate refugees.

The daughter of a Lutheran pastor, Merkel insisted Berlin could not set a ceiling on the number of refugees it takes in. A leading opinion poll showed almost 60 percent of Germans agreed, many with a sense of pride that Germany was respected abroad for taking such a principled stand.

Marx and Bedford-Strohm, the heads of the two main churches, personified the country’s new “welcoming culture” when they unexpectedly turned up in September at Munich’s main train station to greet arriving refugees arriving after their arduous journeys.

As criticism mounted during the autumn and nationalist protesters demanded the borders be closed, the churches mobilized tens of thousands of volunteers to help newcomers settle in, learn German and eventually find jobs.

Church buildings around the country, including a few monasteries, took in refugees. One Protestant parish in the Ruhr valley suspended Sunday services in its church and turned the building into an emergency shelter for about 50 refugees.

In Cologne, a Catholic men’s group took male refugees to a swimming pool to show them how scantily clad western bathers behave in public.

As thousands of migrants — including Iraqis, Afghans, Somalis and North Africans — streamed into the country, politicians and editorialists began to question Merkel’s approach. Their criticism got louder as the influx — which would reach 1.1 million by year’s end — continued seemingly without end.

It was not until mid-December, as allies called for a cap on migrants and her opinion poll ratings sank, that Merkel pledged she would “noticeably reduce the number of refugees.” She also said Germany had to be more aggressive about sending back economic migrants with no right to political asylum.

Church leaders hesitated to mention any limits in their Christmas and New Year’s messages, “Because of Germany’s experience in the Nazi period, people who are oppressed politically or suffer war and terror must be able to find protection and help here,“ Cologne’s Cardinal Rainer Woelki said. “Because of our faith, we owe that to these people and to society.”

The episode seemed like vindication for Merkel’s critics, who argued Germany had lost control of the situation and faced a serious problem integrating the mostly Muslim immigrants from undemocratic and patriarchal societies.

By mid-January, 60 percent of those surveyed told a leading opinion poll they no longer believed Germany could deal with the refugee influx.

While warning against anti-immigrant campaigners, Woelki said Germany’s commitment to defending human dignity had to apply to German women as well.

“We need to reduce the number of refugees,” Marx said in early February. “We shouldn’t do this when the people are already at our border, but by helping their home countries and regions … there are no easy solutions.”

Recalling the fall of the Berlin Wall, he added: “Twenty-five years ago, many people thought we were entering a New World Order and the ‘end of history’. Things have turned out differently.”