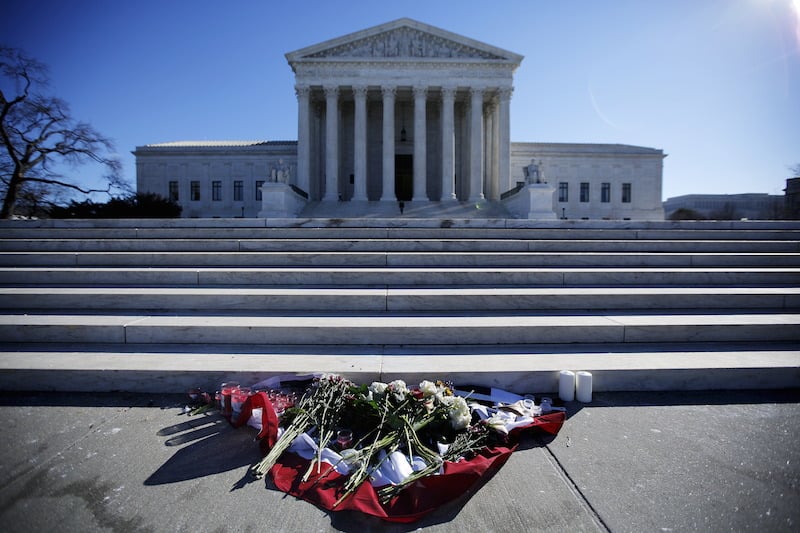 Flowers are seen in front of the Supreme Court building in Washington on Feb. 14, 2016, after the death of Supreme Court Justice Antonin Scalia. REUTERS/Carlos Barria

WASHINGTON — The death of Supreme Court Justice Antonin Scalia is a major setback for the conservative legal movement, as will become clear in the months ahead.

This was to be the term conservatives roared back after one in which the court’s liberal bloc won most of the important cases, such as same-sex marriage and Obamacare. On tap to be decided in the next four months are cases affecting abortion rights, affirmative action, voting rights, the power of labor unions and President Obama’s health care and immigration policies — and conservatives stood at least a chance of winning them all.

Not anymore. Scalia’s untimely death Saturday at a Texas ranch leaves an empty seat on the Supreme Court — almost surely for the remainder of the 2015 term, and most likely for the duration of Obama’s presidency. While the White House and congressional Democrats would like to fill the seat, their chances of prevailing on those important cases and others improved markedly.

That’s because the court is now divided evenly between liberals and conservatives — in fact, tilted slightly to the left because Justice Anthony Kennedy often takes the liberal side. Tie votes would uphold the lower court’s ruling; only the abortion and immigration cases were decided in conservatives’ favor at that level.

Here’s a look at the biggest cases pending before the court, their current status and potential outcome in the wake of Scalia’s death:

Voting rights (heard Dec. 8): The court is considering changing the way state and municipal voting districts are drawn by allowing them to be based on the number of eligible voters, rather than total population. That would render non-citizens invisible in the count, along with children, prisoners, some ex-felons and some people with intellectual disabilities. The result: more rural, mostly white districts.

During oral argument in December, it seemed the conservative justices might have five votes to move away from using total population. But they couldn’t come up with a practical alternative, making it a long shot that the status quo — using total population — is reversed. For that reason, Scalia’s absence may not affect the outcome.

Affirmative action (heard Dec. 9): In a crucial test of university admissions programs that take race into consideration, the court’s conservatives appeared ready in December to cut back on affirmative action. At the least, it seemed the University of Texas-Austin’s program would be affected.

Scalia played a leading role during oral argument, noting that some briefs submitted to the court suggested that African Americans may do better at “less advanced” or “slower-track” schools. “­I don’t think it stands to reason that it’s a good thing for the University of Texas to admit as many blacks as possible,” he said. Without his vote, the school’s program still could be doomed because liberal Justice Elena Kagan is recused, setting up a possible 4-3 vote.

Labor unions (heard Jan. 11): This is the case that conservatives seemed most assured of winning, until now. During oral argument, the conservatives sharply criticized the current system in which public employees in 23 states and the District of Columbia must pay for the cost of collective bargaining, even if they disagree with union demands.

With Kennedy leading the way, the court appeared likely to strike down that requirement, which would reverse the lower court and deal a major blow to the financial clout of public employee unions such as the California Teachers Association. Now, a tie vote looms which would uphold the system.

Abortion (to be heard March 2): Abortion clinics in Texas are challenging a state law, upheld in lower courts, that imposes tough new restrictions on doctors and facilities. The case has shaped up to be the biggest one affecting reproductive rights since 1992.

Now, however, it appears that if supporters of abortion rights don’t win outright with the support of Kennedy or another conservative justice, a 4-4 tie upholding the Texas law would not set a new national precedent for federal courts to follow.

Contraception (to be heard March 23): Religious non-profits such as charities, schools and hospitals are seeking an exemption from the Affordable Care Act’s mandate that employers pay for contraceptives as part of standard health insurance plans. They stood a good chance of winning with Scalia on the bench.

Now, the most likely outcome is a 4-4 tie that would leave the so-called “contraceptive mandate” in place for those non-profits.

(to be heard in April): President Obama already had a decent chance of reversing an appeals court ruling and winning about six months to begin implementing his immigration plan, which would shield more than 4 million undocumented immigrants from deportation. But that was by no means a sure thing.

Without Scalia, the president still needs the vote of at least one conservative justice to win the case. A 4-4 tie would preserve the lower court’s decision against the program, but without setting a national precedent.